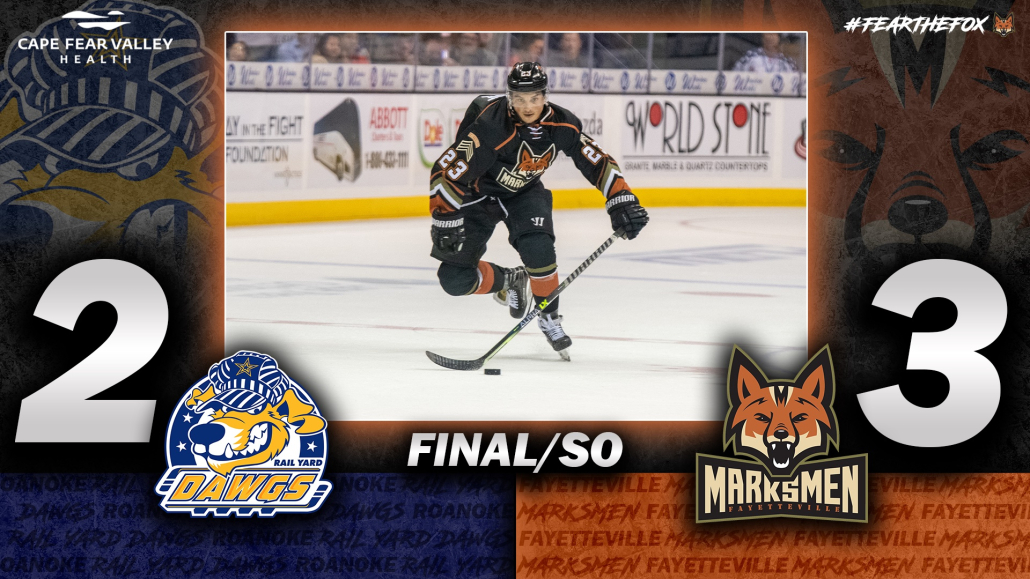 FAYETTEVILLE, N.C.– The Fayetteville Marksmen, proud members of the Southern Professional Hockey League, earned their third win of the season over the Roanoke Rail Yard Dawgs this afternoon, 3-2.

Roanoke scored late in the first period when Brady Heppner logged his second goal of the season on the power play.

BACK AND FORTH SECOND PERIOD

Roanoke added another when Mac Jansen crashed the net and scored to make it 2-0. Jansen led the charge for Roanoke with a goal and an assist.

The Rail Yard Dawgs outshot the Marksmen 24-16 in the game.

Nick Mangone scored for the Marksmen on a rolling pass that bounced back to his stick that he buried to make it 2-1.

After Brody Duncan and C.J. Stubbs took penalties 50 seconds apart late in the second period, Austin Alger found Carlos Fornaris on the powerplay to make it 2-2. Fornaris’s goal marks his second in three games this season.

After the second period, referee Derek Boehm declared the ice surface unfit for competition with the input of both coaches and the game was determined in a shootout. Both teams secured at least one point in the standings.

Drake Glover and Carlos Fornaris scored in the shootout and Jason Pawloski stopped all four Rail Yard Dawgs attempts he faced. Pawloski did not take any warmup shots while Austyn Roudebush did.

The Marksmen have now won 10 of the last 11 vs. Roanoke including three straight since October 22.

Roanoke has not won in Fayetteville since January 13 and Austyn Roudebush is 0-4-2 in his last six starts vs. the Marksmen.

The two teams will next see each other on Friday, November 25 at Berglund Center to kick off a stretch of three straight matchups between the two teams.

Marksmen roll in weeknight matchup vs. Mayhem Scroll to top