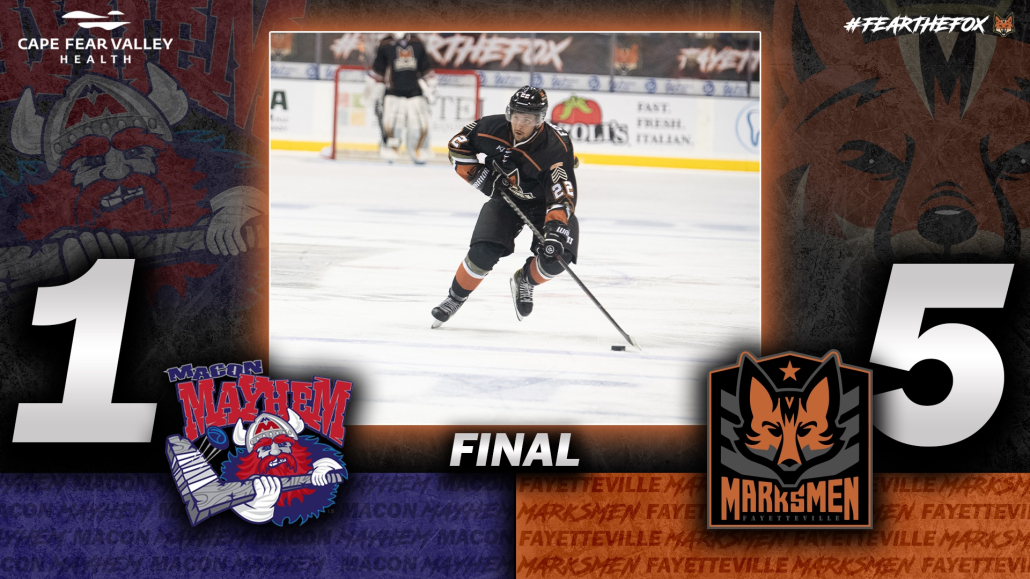 FAYETTEVILLE, N.C.– The Marksmen took the lead early and never looked back as they easily handled the Macon Mayhem with a convincing 5-1 win on Wednesday night.

It was a slow start for both teams as the Marksmen didn’t put their first goal on the board until 13:01 into the first period, with Drake Glover finding the net for Fayetteville . Macon would answer with a late powerplay goal from C.J. Hayes to tie the game at one.

The start of the second was much the same until the 8-minute mark when Andrew Lane put the puck in the back of the net, that would blow open the doors for the Marksmen. Cale List followed with a goal 19 seconds later, forcing Macon to use their timeout.

Not even five minutes later the Marksmen did it again and grew their lead to 4-1 with Vincenzo Renda’s first goal of the season.

Things were chippy throughout the course of the game with a large altercation at the end of the second period.

Nick Mangone would add a goal to an earlier assist and complete the night with a Gordie Howe hat trick (a goal, assist, and fight).

11 of 16 skaters registered a point for the Marksmen as Fayetteville improved their record to 6-5-1.

The Marksmen next travel to Roanoke on Friday before heading south to Macon to round out the weekend.