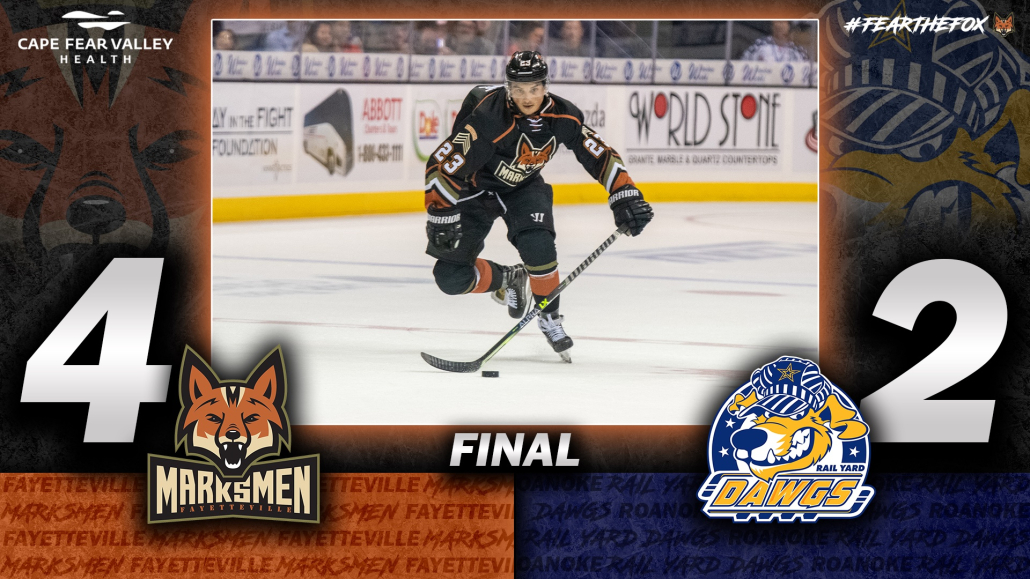 After a scoreless first period, D-Jay Jerome opened the scoring for the Marksmen with his second goal of the season 4:03 into the period.

Less than two minutes later, Drake Glover crashed the net and scored on his own rebound to make it 2-0 Fayetteville.

Jason Pawloski was a stalwart in net, turning away 40 of 42 shots faced. Pawloski’s only goal allowed before the third period was a double-deflected point shot from Stephen Alvo.

Austyn Roudebush finished the game with a paltry 19 saves on 23 shots. Roudebush has not logged a win vs. Fayetteville since January.

Taylor McCloy socred late in the second period to make it 3-1 Marksmen, stopping a shot from Andrew Lane and taking one from point-blank range himself. McCloy leads the team in goals with three while Lane is a point-per-game player to this point.

On the penalty kill, the Marksmen were perfect including two kills late in the third period to salt the game away.

A THIRD PERIOD TO REMEMBER

After Travis Broughman scored midway through the third period to make it 3-2, the Rail Yard Dawgs thought they had tied the game on a Mac Jansen goal.

However, the goal was disallowed because of goaltender interference as Broughman collided with Jason Pawloski skate-to-skate before the Jansen shot.

With 24 seconds left, Brian Bowen scored his 99th point as a Marksmen with an empty net goal.

The Marksmen head home to face an upstart Macon team who lost a heartbreaking game in Knoxville 3-2 tonight.

These two teams will square off against each other on Sunday, November 6 in Fayetteville to complete the weekend.