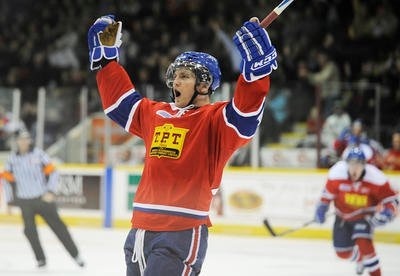 FAYETTEVILLE, N.C. – The headline for the Marksmen early-on in their second season in the Southern Professional Hockey League has surrounded their mostly-rookie core group. While lead on the ice by veteran Jake Hauswirth, many of the returning guys for the Marksmen have only played a couple seasons tops.

That narrative changes a bit today, as the team officially announces the signing of six-year professional hockey player Zach Tatrn.

Tatrn, a 6’2 205 pound forward from Lower Burrell, Pennsylvania most recently played with Roanoke, and faced Fayetteville during this season’s exhibition game.

Playing two seasons with the Rail Yard Dawgs, Tatrn found his way to 40 points (18G+22A) in 68 games played. He started with the Dawgs after winning the Commissioner’s Cup with the Port Huron Prowlers of the Federal Hockey League, being called up in the 2016-2017 season.

Following that season in Knoxville, Tatrn would spend his next three seasons in the FHL, splitting time with the Steel City Warriors, Danbury Titans, and Prowlers. Tatrn was a standout in the FHL, accumulating 96 points (33G+63A) in 101 games played.

Now Tatrn looks to call the Rail Yard Dawgs’ rival, Fayetteville, home. Tatrn, making the trip to the All-American City earlier, finds himself heading to the Midwest for a pivotal weekend for the Marksmen to have a measuring stick.

An opportunity that Tatrn is heavily looking forward to – finding his fit.

“I’m excited to be a part of the team. Adter talking with Coach Kallechy, I feel like it’s a good fit and he likes the way I play the game,” said Tatrn “It means a lot that he feels I can create on offense, be defensively responsible, and bring veteran leadership to a younger team”

Tatrn will have a short-time to learn the Marksmen’s systems, but his knowledge and experience in this league will be a big addition for the young roster.

We welcome Zach Tatrn to the Marksmen, and excitedly await his impact.