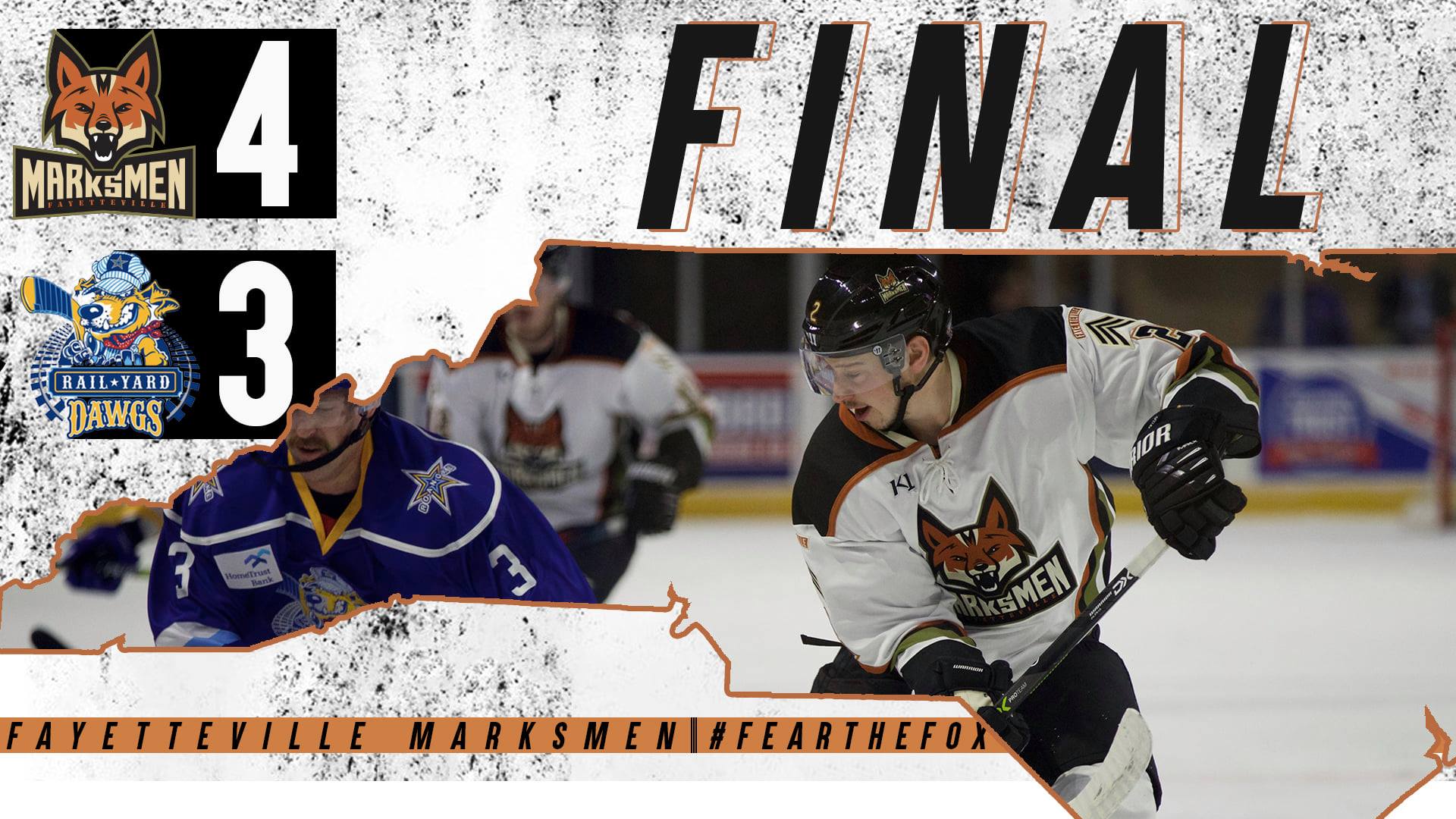 Looking to keep the undefeated record, and the win streak over the Rail Yard Dawgs intact, the Marksmen hit the road Friday. Fayetteville seemed to still be on the bus in the opening minutes of the game, giving up a goal on the opening shot of the game to Roanoke’s Aaron Huffnagle.

The goal didn’t affect the Marksmen much, but it also didn’t wake them up, as they let the Dawgs get four consecutive shots on net to open the game. Fayetteville finally put a shot on net, but it took seven and a half minutes. That shot, unlike the others, woke up the sleepy Marksmen offense. A Roanoke penalty opened up the gate of opportunity, and the Marksmen took advantage. Luke Stork found the net for his fourth goal of the young season, tying the game back up at one.

The offense used the momentum from the goal to their advantage, seven of the last eight shots on net in the opening period came off a Fayetteville stick. Luke Stork didn’t keep away from the score sheet for long as he netted his fifth of the season. Stork’s goals came almost exactly three minutes apart, this one giving the Marksmen the lead in the latter half of the first period.

Fayetteville didn’t take much time getting the puck to the net out of the intermission, but it was Roanoke that struck first. Only 2:12 into the period the Rail Yard Dawgs found the net, tying the game back up, this time at two goals a piece. The Roanoke goal killed most of the momentum the Fayetteville offense had created, holding the Marksmen to only two shots on net for the next seven minutes. Even a power play couldn’t fix the shortcomings that the offense was having for the Marksmen in the middle of the second.

The newest Marksmen, Shane Bednard, got the offense going again. His shot was the first in a flurry of five Marksmen shots, the last of those five finding the back of the net. Dylan Vander Esch scored his first goal as a Marksmen, putting Fayetteville back in the driver’s seat with a 3-2 lead. The goal led to a goaltender change for Roanoke, seeing if a new body in net would fix their woes.

Completing the second period was a breeze, the final nine minutes went off the clock without much issue. A pair of power plays didn’t lead to anything for the Marksmen, as they took their 3-2 lead into the second intermission.

One word to describe the third period for the Marksmen was sloppy. The Marksmen started off the period well, putting three shots on net in the opening five minutes. Then the rough play started. A tripping penalty led to an advantage for the Dawgs, Fayetteville killed that one off, but got another penalty seconds after reaching full strength. The penalty kill came in clutch, killing off yet another penalty, but their work wasn’t done. Just one minute after the second consecutive penalty kill, another Marksmen got sent to the box. The penalty kill was out of energy, as the first shot went in for Roanoke, tying the game at three.

Still 10 minutes remaining in the game, the Marksmen didn’t have too much of a reason to sweat out the end. They fired off five shots in a minute, none of which went in. That didn’t discourage them, as the next time they got the puck the Marksmen peppered five more shots on net, with the fifth one being crucial. Dylan Vander Esch found the net for the second time tonight, giving the Marksmen the lead at 4-3.

The suspense wasn’t done there. In the final minute of play, Vander Esch got a penalty, making the game six on four, as Roanoke had pulled their goalie. The Marksmen defense held strong, allowing only one single shot on net in the final minute of the game, closing it out for Fayetteville.

The final horn sounded, and the Marksmen reigned victorious, 4-3, over the Rail Yard Dawgs. The win gives the Marksmen their best start in franchise history at 6-0-1. The Marksmen come back home next weekend for two games against these same Rail Yard Dawgs, looking to push their win streak over Roanoke to three next Friday.

MARKSMEN CONTINUE TO WIN ON THE BACK OF STELLAR OFFENSE! Scroll to top