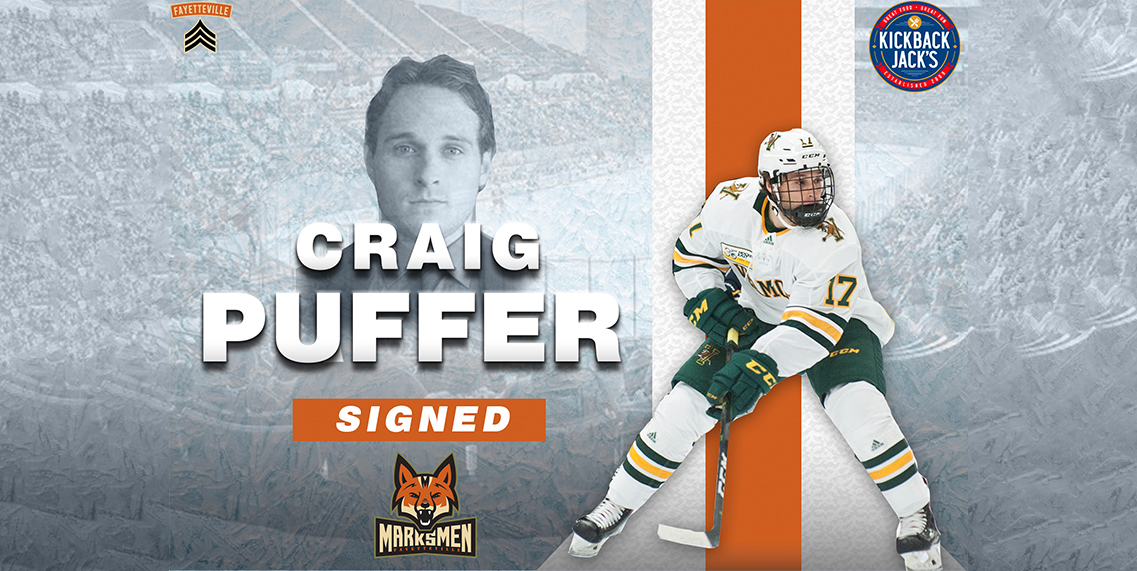 FAYETTEVILLE, N.C. – With a hot start to the season, the Fayetteville Marksmen are wasting no time in continuing to harness as much talent and depth as they can. That philosophy continues today as the team announces the signing of two NCAA Division 1 alumni with ECHL experience in Craig Puffer and Shane Bednard.

Craig Puffer, a 5’9 170 lb left-handed Forward, finds his way down to Fayetteville after a handful of games with the ECHL’s Indy Fuel to close last hockey season, where he scored a goal.

The 24-year-old finds his way professionally by-way of the prestigious hockey school, the University of Vermont (NCAA D1), where he played in nearly every game, acquiring 54 points (22G+32A) in 142 collegiate games.

Puffer will rejoin his fellow classmate and teammate Brian Bowen on the Marksmen offense.

Shane Bednard, a 24-year-old forward from Macomb County, Michigan is an alumni of the Bowling Green State University (NCAA D1), where he played 60 games, amassing 13 points (1G+12A). The 5’10 178lb right-hander most recently spent time in the ECHL, where he suited up in six games with the Norfolk Admirals.

Prior to his time collegiality, Bednard suited up for the Bloomington Thunder of the USHL (Tier I Junior), accumulating 39 points (16G+23A) in 58 games and was awarded the team’s MVP at the end of the season.

“Shane is a player I talked with quite a bit this offseason, and from the start he showed a high-maturity and hockey knowledge. He has a natural-scoring ability and works really hard,” said Kallechy “He’ll be a great addition to our offense, and we expect his talents to thrive with us.”

Bednard is one of two professional hockey players in his family; his brother Ryan – whom he played with at BGSU – was drafted by the NHL’s Florida Panthers, and played in the same division as Shane with ECHL Greenville. Both are also cousins with Marksmen Broadcaster Shawn Bednard.

In a corresponding move with the signings, the Marksmen have traded forward Kyle Moore to Roanoke for Future Considerations. We thank Kyle for his time with Fayetteville, and wish him the best in his hockey career.

Arfelt comes to the All-American City!

MARKSMEN STAY UNDEFEATED THANKS TO TWO PAIRS OF GOALS! Scroll to top