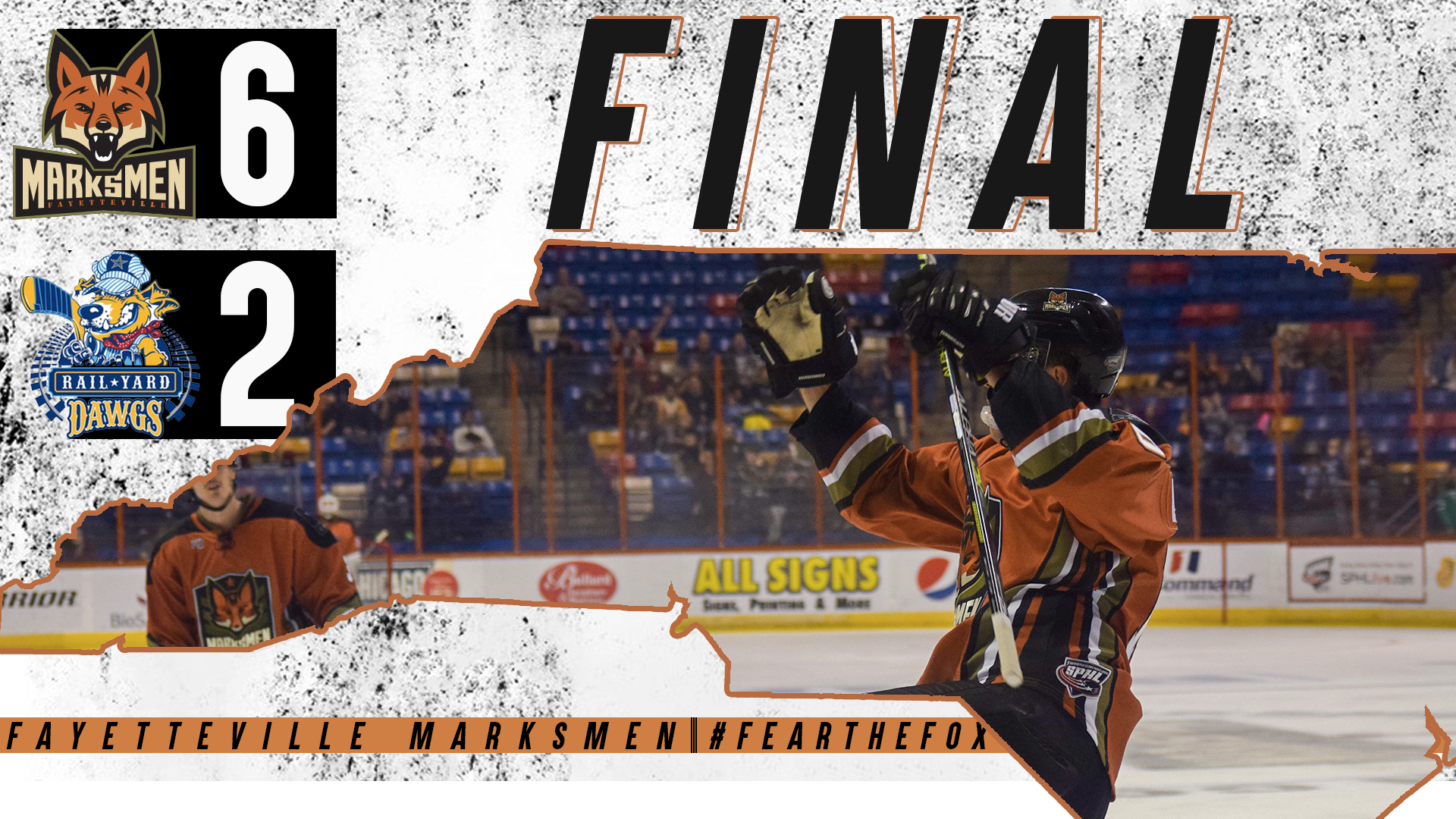 FAYETTEVILLE, N.C.- Parity was the word of the night as the Marksmen went up against the Roanoke Rail Yard Dawgs Friday night.

It was Veterans Night at the Crown, a huge contingency of veterans and their families came out to see the Marksmen. It didn’t take long for Fayetteville to give them something to cheer about. Taylor McCloy opened the scoring, putting one in the net only 4:46 into the contest. The goal was McCloy’s second of the season, with the other coming against these same Rail Yard Dawgs in the season opener. The goal put the Marksmen up 1-0 and they didn’t look back.

Fayetteville commanded the puck on their offensive end for the next couple minutes, firing off the next four shots after their goal. Roanoke quickly took over on the offensive end, controlling the puck while putting multiple shots on net. The Marksmen penalty kill got to put in some time as Alec Marsh was called for a penalty at the midway point of the period. The kill was successful, but it didn’t kill the influx of shots on net by the Dawgs.

Danny Tirone came up big for the Marksmen early, not allowing a single goal early in the game. Allowing seven shots in a row, the Fayetteville offense finally got back to it. Shane Bednard found the net for his first career professional goal, putting a spark back in the dorment Marksmen attack. The Marksmen put more shots on net, but couldn’t get any more through. The horn sounded, and the first period ended with the Marksmen ahead 2-0.

The second period started out rough for Fayetteville. Max Cook was put in the box, under two minutes into the action. The penalty kill team came in clutch once again, easily killing off the penalty, only allowing one shot for the whole two minutes. The period stayed scoreless until a common foe to the Rail Yard Dawgs heated up.

Dylan Vander Esch found the net just under eight minutes into the second. After scoring a pair of goals last week in Roanoke, Vander Esch kept it going, extending the Marksmen lead to 3-0. The fans barely stopped celebrating Vander Esch’s goal when Taylor McCloy put his name back in the scorebook. Two minutes after Fayetteville’s lead extended to three, McCloy made it four with his third on the year.

For the second game in a row, the Marksmen drew a goaltender change out of Roanoke. The Rail Yard Dawgs needed to flip the script, as they changed goaltenders while trailing 4-0. Special teams got called on again by the Marksmen, this time being the power play team. Fayetteville’s first power play of the game was uneventful, as they failed to score. The Marksmen stayed active on the offensive end, breaking in the new Roanoke goaltender with a flurry of shots, none of which found the net. The penalty kill came out again to finish the period, keeping the net clear through two periods.

Roanoke got it going in the third, as an early penalty led to their first goal of the game by former Watertown Wolf, Mac Jansen. Jansen put a spark into the formerly dead Rail Yard Dawg offense. The Marksmen put more shots on net, but couldn’t get any momentum on the Roanoke offense. Three and a half minutes after the first goal, Roanoke found the net again, shortening the Marksmen lead to only two at 4-2.

The run stopped there for Roanoke as Fayetteville picked it back up, with Vander Esch scoring his second goal of the game, effectively putting the game in the win column for the Marksmen. Tim Kelich added insult to injury as he put the finishing touches on the game with a backhanded flip into the goal, making it 6-2 for the Marksmen.

The final seconds ticked off the clock, with the Marksmen being victorious 6-2, for the seventh time this season. Their fourth straight win over Roanoke, pushing their record to 7-0-1, and first in the league. They look for five straight over the rival Rail Yard Dawgs on Saturday.

MARKSMEN STAY UNDEFEATED THANKS TO TWO PAIRS OF GOALS!

MARKSMEN REAMIN JERKS OF SPHL AS THEY WIN THEIR 7TH STRAIGHT! Scroll to top