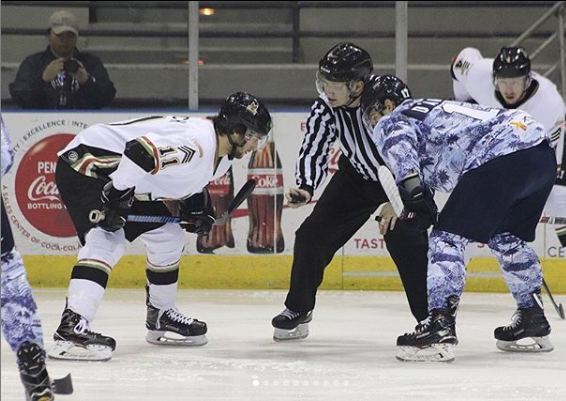 PENSACOLA, FL – A split with Knoxville, and a race for fifth brought the Marksmen to the Sunshine State for a weekend set with Pensacola. The Marksmen needed to win to have a chance at taking over fifth place pending a Knoxville loss. The game started off quick, but not in the Marksmen favor.

Pensacola started off at blazing pace, scoring a goal only 40 seconds into the contest. The goal was scored on their first shot of the game, and gave them the lead at 1-0. The Ice Flyers needed to prove that they were here to play, and they did. A Marksmen penalty and an invigorated Pensacola power play got the second goal of the game into the net. The goal was the first one scored on the Marksmen penalty kill in over two weeks. The goal gave Pensacola a 2-0 lead only 4 minutes into the game.

Pensacola decided that two wasn’t enough, and kept adding on to their scoring in the first. With 4:07 left in the period, Pensacola’s Ryan Devine found the net giving the Ice Flyers a 3-0 lead. Fayetteville was determined to not go into the dressing room down a trio. With a minute and a half to go in the opening period they finally opened up the scoring on their side of the board. Taylor McCloy worked himself to the front of the net off a Tim Kielich pass, and snuck the puck through Pensacola’s Brian Billett’s legs, shortening the Pensacola lead to two.

Going into the second, the Marksmen had a lot of ground to make up. The second period really opened up the game, in something other than scoring. There were a total of 38 penalty minutes between the two teams in the second, Fayetteville with 22 of them.  A penalty filled first half of the second leads to another goal in the ninth minute for the Ice Flyers. Pensacola looked to put the game away early, now with a 4-1 lead mid way through the second.

Fayetteville didn’t go away quiet, and showed they were still here to play in the second as Jake Hauswirth added to the Marksmen tally with a shot from the goal line on the far left of the net. The goal came off a pass from Max Cook, and shortened the Pensacola lead back to two. A pair of penalties, leading to no scoring took the game into the dressing room with Pensacola up by two.

Period three started off with the Marksmen and Ice Flyers playing 4-on-4 hockey, and the Marksmen would need a goal early to be able to close the gap and give them a chance. After some solid back-and-forth play in the first half of the period, Alfred Johansson would let one rip from the blue line with a McCloy screen in front to give the Marksmen just a one-goal deficit, and make it a game.

An intense final 10 minutes would ensue, as the defense stepped up and gave the offense all the chances they could. It would take until the very final shift in the offensive end for magic to happen. Having an empty net for a minute-and-a-half, everyone had to step up their effort as the Pensacola forecheck tried to ice the game in every way they could. Alternate Captain Tyler Palmer even had to play goalie with a beautiful kick-save to keep it alive.

With under 10 seconds remaining, Fayetteville would give their last gasp in every way they could, before Darren McCormick found it back behind the net and somehow snuck it through Billett’s legs with 1.6 seconds left to force overtime and give the Marksmen a crucial point.

Overtime would not see an offensive-zone possession for Fayetteville, as Pensacola would intercept the puck at neutral-ice on Marcuz’s stick, drive up from the left-side on a breakaway, and put the game away with a 5-4 overtime winner.

With the OT loss, Fayetteville comes away with a point and finds themselves tied once again for Fifth Place with the Knoxville Ice Bears (following a loss in Evansville). Every team that the Marksmen needed to lose (Huntsville, Macon, Knoxville) lost last night, closing the gap for the Marksmen down to just five points for Third Place.

The Marksmen head back to The Hangar tonight in the second of three games against the Ice Flyers, looking to continue working their way towards the top of the SPHL standings.

Join us tonight at 8:05 at On-After for the Home Away From Home Watch Party, or listen live anywhere to the Voice of the Marksmen Shawn Bednard on MarksmenRadio.com.

Marksmen Return to Panhandle for Three in Three