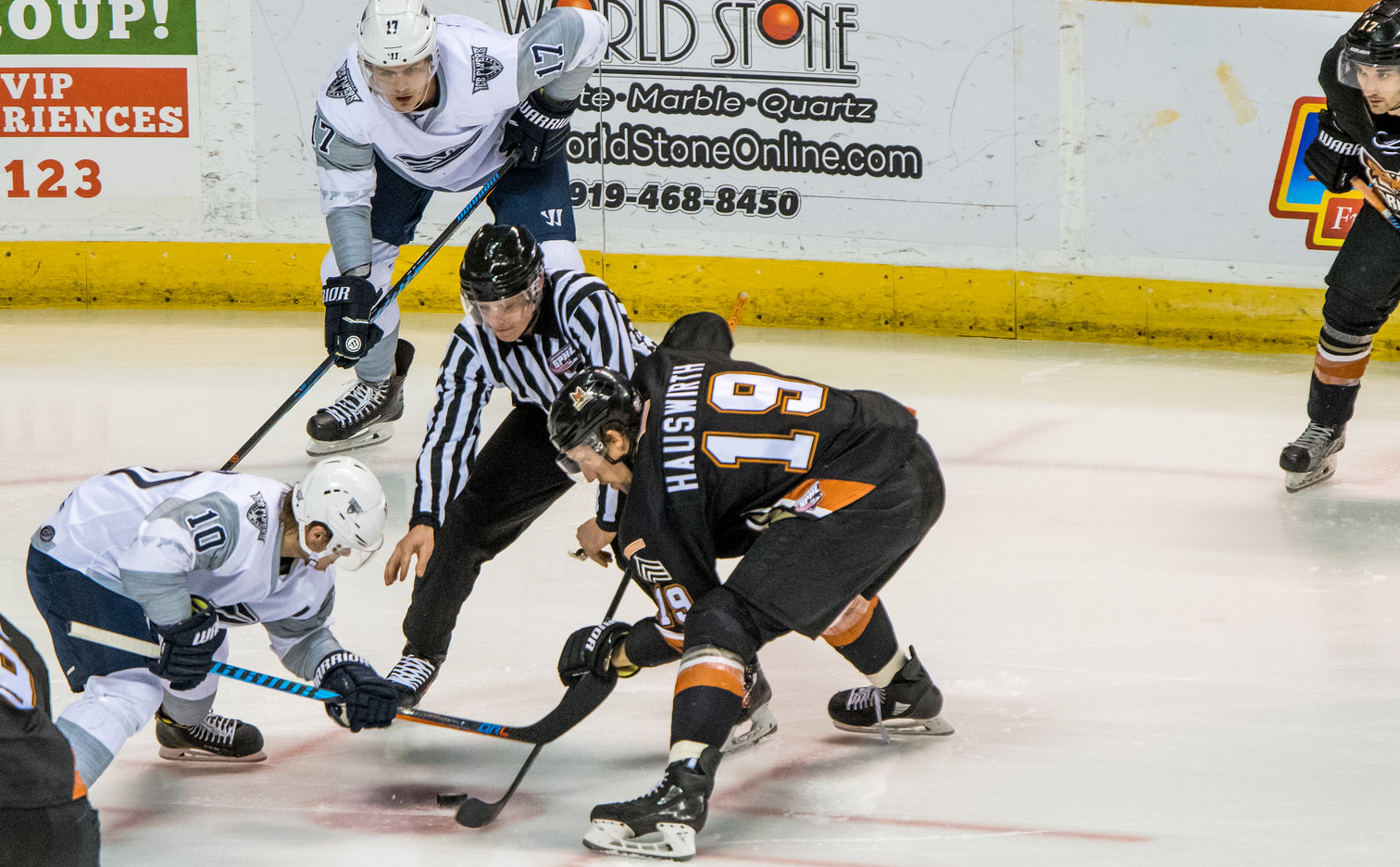 FAYETTEVILLE, N.C. – A split with Knoxville, and a point out of fifth takes the Marksmen to the Sunshine State for three games against the heating-up Pensacola Ice Flyers. A huge overtime win on Saturday in Knoxville looks to be a point of momentum for the Marksmen going into the latter half of the season.

The Marksmen take their second trip to Pensacola this season, where they won both of their previous two games. The Marksmen look to improve on their 10-5-3 record away from Fayetteville, the fourth best road record in the league.

Defense was key in the last match-up between these two squads, as both games were only one score games. After giving up three in game one, Fayetteville shutout Pensacola in their second and most recent meeting.

On paper, the defense appeared to be slacking against Knoxville, giving up an astounding 17 goals in the last four games. Though, this number is skewed by a harsh 8-2 loss at home for the Marksmen. After the weekend, Head Coach Jesse Kallechy spoke very highly of the team’s effort, and came away with a good feeling after a hard four game set.

Although the five-on five-defense may not have been the best, the penalty kill was outstanding. Last weekend against Knoxville, the Marksmen killed off every single Ice Bears power play. Fayetteville went 7-7 on the penalty kill, improving their season percentage to 81.8%.

Contrary to the kill, Fayetteville’s power play didn’t have a ton of chances to prove themselves. Knoxville’s league-best penalty kill kept the Marksmen advantage dormant, as the Marksmen failed to score on their four tries with the man-up. Even with the empty weekend, Fayetteville’s power play numbers stay as second best in the league. They look to take advantage of Pensacola’s league second worst penalty kill.

Pensacola finds themselves holding on to the final playoff position, after a sweep of the #4 Macon Mayhem last weekend. Despite a slow start with a notable amount of roster movement, the Ice Flyers have seemed to find consistency behind good goaltender play, and a Player of the Week winner in Brian Billett. If the Ice Flyers want to secure their spot as the final playoff contender, or move up, a huge home weekend against the Marksmen is vital.

The Marksmen currently sit at sixth in the SPHL, only a single point behind Knoxville. Even being in sixth, the Marksmen are only six points out of third (Huntsville). At 42 points, Fayetteville remains in prime position to move up and possibly be choosing an opponent for the challenge round in the postseason. Six points this weekend against Pensacola, holding the #8 seed, would catapult them into an even better position.

Fayetteville plays their next six games against these same Ice Flyers. Following this weekend’s series in Florida, Pensacola visits the Crown for a trio of games next weekend. A key series of games down the stretch for the Marksmen as they fight for playoff positioning.

Join us this weekend at On-After Sports Bar & Grub for all three of our Home Away From Home Watch Parties, as the Marksmen look to battle themselves up the playoff positioning ladder.

If you’re unable to make it out to our friends at On-After, listen worldwide for free on the Radio Home of Marksmen Hockey,  MarksmenRadio.com where the Voice of the Marksmen Shawn Bednard will call all the action as it happens. Keep up with the weekend’s highlights and live-scoring on our social media platforms, listed below.