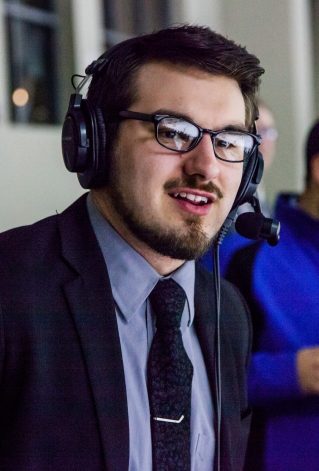 FAYETTEVILLE, N.C. – The Fayetteville Marksmen Hockey Club is excited to announce the hiring of the team’s new Director of Media Relations, and Play-by-Play Broadcaster, Shawn Bednard.

“Maintaining great communication from the team to the fans is essential when trying to build excitement and keep people engaged”, said Marksmen President Charlie Hildbold.  “It was very important to me to bring in the very best people I could find to fill out our staff for the 2018-2019 season, and Shawn represents the very best. I’m excited for the fans to get to know him, and excited to see how he helps to grow the Marksmen brand in Fayetteville.”

Bednard, 22, is a 2018 graduate of Central Michigan University with a Bachelors of Applied Arts in Broadcast and Cinematic Arts, joins the Marksmen after three years as the Director of Broadcasting of the Chippewa Hockey Network, a multi-media broadcast conglomerate that was co-founded by him, and covered CMU’s American Collegiate Hockey Association teams. This past year, Bednard also served as the ACHA Division III’s Chief of Broadcasting, executive producing and hosting three national television shows for the league, helping to coordinate the broadcast team for the ACHA National Tournament, as well as serving as the lead Play-by-Play for the tournament. More recently, Bednard has been a lead SPHL writer for low-level hockey news site BusLeagueHockey.com.

“To be able to start my professional career in a league like the SPHL, in a city with such an historic and long-standing relationship with their hockey team as Fayetteville is nothing short of a blessing. I feel so lucky to be able to kickstart what I hope to be a precedent setting media network in the league, and being able to work closely with the community to make that possible is an exciting endeavor,” said Bednard “I cannot thank [President] Charlie and [Owner] Chuck enough for this opportunity, and am ready to get to work to take the Marksmen brand to the next level with them.”

Coming from Davison, Michigan and getting instilled in the hockey-rich community of Flint from an early age, the game has always been in his blood. Bednard knew before high school that he wanted to pursue a career in broadcasting, starting with the nationally acclaimed student television station Davison Television. He was awarded both regionally and nationally in his three years as Sports Director under supervisor Randy Scott.

In his collegiate career, Bednard was able to broadcast for the Ontario Hockey League’s Flint Firebirds, NCAA Hockey’s Ferris State Bulldogs, all five divisions of the ACHA, ESPN3, and among various sports for Central Michigan University. He has called nearly 200 hockey games in his young career.

Aside from hockey, Bednard also served two years as the Assistant General Manager of the Lake Erie Monarchs amatuer baseball team of the Great Lakes Summer Collegiate League, coordinating the Monarchs Radio Network and working as the head of community relations.

Bednard’s responsibilities will include the growth and creation of a true Marksmen Hockey Media Network, assisting with marketing and promotion of the franchise, handling media sales and corporate partnerships, and providing Season tickets and Group Packages.

To get in touch with Bednard, reach out to him at SBednard@MarksmenHockey.com or at his phone number (810) 516-6349, and follow him on Twitter @CallMeBednard.

BE SOCIAL: Follow the Marksmen on Facebook, Twitter, and Instagram for all the latest news and information surrounding the team. Search and follow “Marksmen Hockey” for behind-the-scenes content, player and coaches interviews, and much more!
The Fayetteville Marksmen are owned and operated by Union Pro Hockey Group and play their home games at Crown Coliseum. The Marksmen are a committed community asset, designed to provide premium entertainment to families and individuals in Cumberland County and surrounding areas.