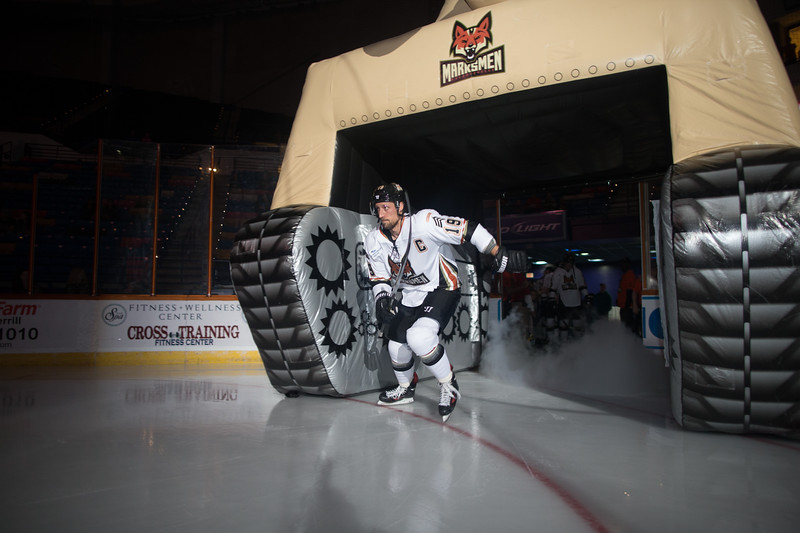 FAYETTEVILLE, N.C. – Ahead of the start of the 2018-19 season, the Fayetteville Marksmen professional hockey club has begun the process of announcing the roster for the Franchise’s second year.

To start off their roster signings, the Marksmen officially announce the resigning of 2017-18 captain Jake Hauswirth. Hauswirth returns to the Marksmen for his third season in Fayetteville, after a 65 point-campaign (26 goals, 39 assists) last year, playing in every single game of the season.

This is the fifth-season in the Southern Professional Hockey League for 30-year-old Hauswirth, who had stints in the American Hockey League, ECHL, and defunct Central Hockey League. Ahead of his third year in Fayetteville, Hauswirth expressed his thankfulness for another year in his professional hockey career.

“First of all, I’m thankful for my wife Mallory, and our beautiful daughter Emma, for supporting me so I can play the game I love for another season,” said Hauswirth “I’m looking forward to getting the season going again. This will be an exciting year for us, [and I] can’t wait to get back at it.”

Leading by example last season as the captain, it was vital for the Marksmen organization to bring back Hauswirth’s leadership on and off the ice back to the team. First-year Head Coach Jesse Kallechy spoke highly about Hauswirth in bringing him back.

“We are very excited to have Jake re-sign with us for the season. He is a proven, elite player at our level who can contribute in many different ways,” said Kallechy “He will be the leader of this team, and expected to bring intensity and fire to show our young players how to be a pro hockey player.”

The Fayetteville Marksmen are excited to welcome back Captain Hauswirth for the 2018-19 season, and look forward to him being the bedrock of what promises to be an exciting season of hockey in Cape Fear. The 2018-19 Marksmen Home Opener is October 19th, and Season Tickets are on sale now.