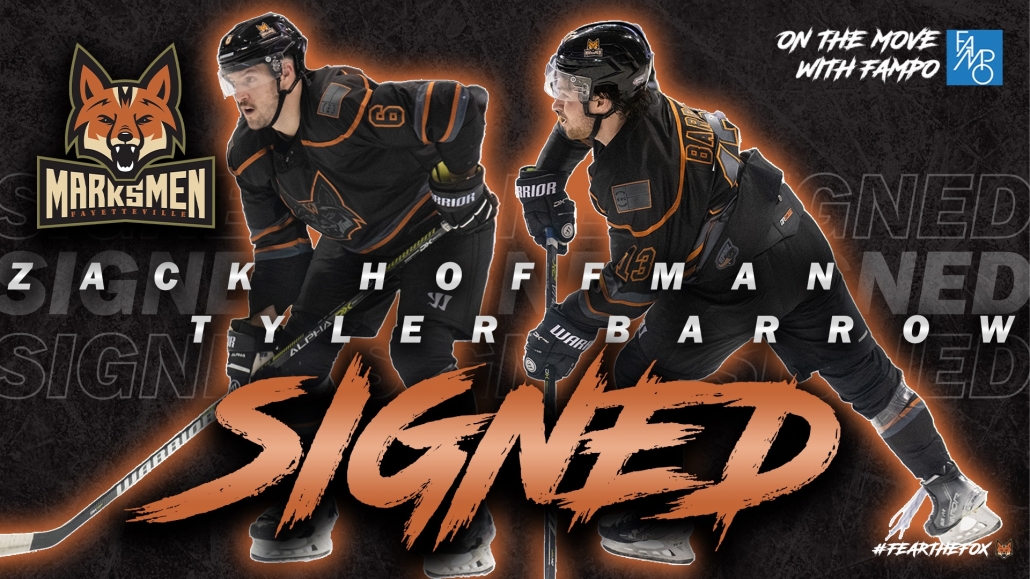 Defenseman Zack Hoffman and forward Tyler Barrow have both agreed to terms with the Marksmen for the 2022-23 season.

“Zack is going into his second year with us and is looking to take a step forward in his play,” said head coach Cory Melkert.

A Canadian-defenseman, Hoffman scored his first professional goal last season and added four assists, though his highlight statistic was a +22 +/- rating.

Prior to joining the Marksmen midway through last year, Hoffman played three seasons with Saint Mary’s University (CAN) logging 32 games in his USports career.

“He’s a big guy,” continued Melkert, “and that size makes him a positive presence on the ice.”

Barrow skated three games with the Marksmen last season before being placed on the season-ending injured reserve list.

Hailing from Massapequa, N.Y., Barrow is no stranger to playing in North Carolina logging 53 points in 36 games with the USPHL’s Charlotte Rush.

Barrow scored his first pro goal on March 19 vs. Birmingham at the Crown Coliseum, but his collegiate stats show even more offensive excellence.

In his career at Wilkes University, Barrow logged 132 points in 88 games, with a 40-point senior season (15g, 25a). His 132 career points are second all-time at Wilkes behind Donny Flynn.

“We’re excited to get him down here,” said Melkert.

Hoffman, Barrow, Melkert, and the rest of the Marksmen faceoff with the Roanoke Rail Yard Dawgs on Saturday, October 22 in the team’s home opener. Single-game tickets are on sale now for the entire season.

After a record 40-win season last year, you will not want to miss a moment of Marksmen hockey this season.