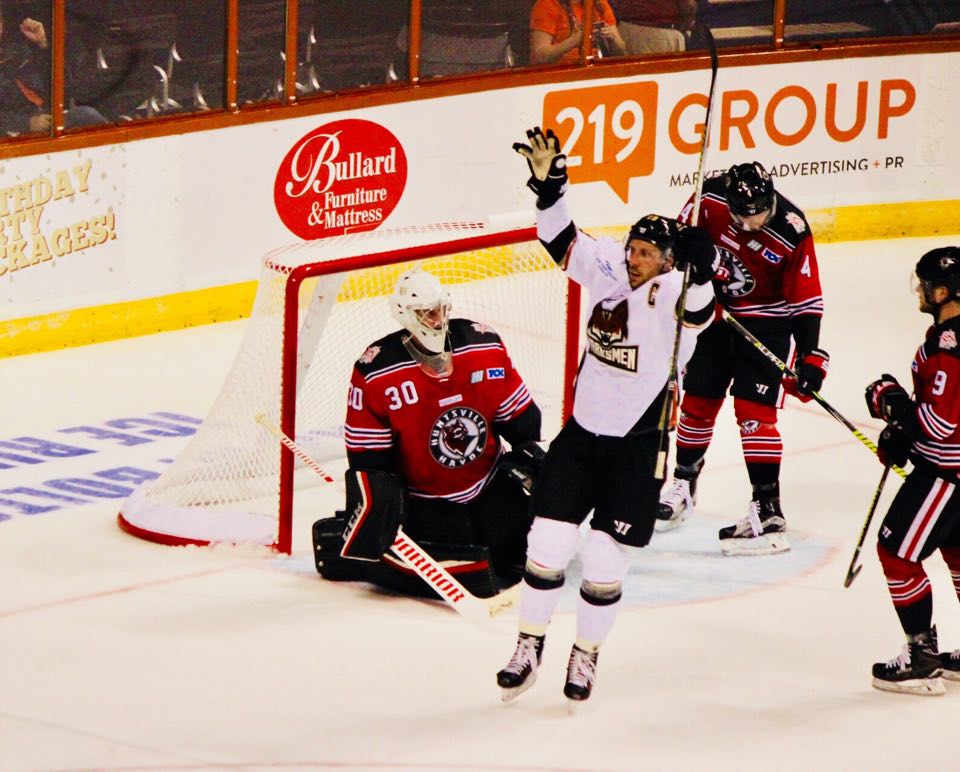 Fayetteville, N.C.-  Powered by Jake Hauswirth’s second three-point game of the season, the Fayetteville Marksmen battled to a 4-2 victory over the Huntsville Havoc at the Crown Coliseum on Saturday night to earn the weekend split.

Each team traded penalties and scoring chances in the opening frame, but neither team could solve the opposing netminder leading to a scoreless first period.

The second period began similarly to the first, but midway through, Kyle McNeil opened the scoring for the Marksmen. Skating into the zone, Hauswirth fed a tape-to-tape pass to Ludlow Harris, who lifted a shot on net. The rebound landed at the feet of McNeil, who elevated the puck over Keegan Asmundson.

Not staying down for long, the Havoc answered with a power play strike. Cycling the puck around the zone, Christian Powers fed a slot-pass to Sy Nukevitch, who was streaking in on net, and tipped the puck past the glove of Peter Di Salvo.

Hauswirth answered with a power play tally of his own, to give the Marksmen a 2-1 lead in the late stages of the second stanza. Max Cook found Hauswirth standing alone at the top of the right circle, affording him the time and space to rip a howitzer past Asmundson.

Given the opportunity on another late power play chance, McNeil made it a 3-1 with his second of the game. Cook drove in on Asmundson, who made a diving poke-check save, but McNeil followed the shot and backhanded it to the top corner of the net.

Carrying that momentum into the third period, the Marksmen only needed 3:24 to extend their lead to 4-1. Fresh off a penalty kill, Travis Jeke poked the puck away at his own blueline and carried down to the slot, rocketing a wrist shot into the top corner, over the blocker of Asmundson.

Attempting to claw their way back, the Havoc pulled to within two goals. Jack Ceglarski picked up a failed clearing attempt at the Marksmen blueline, skated in above the circles and put a shot past Di Salvo who was partially screened on the play.

That would be as close as the Havoc would get, giving the Marksmen a 4-2 victory.

Game Notes: Hauswirth has at least a point in the first three games of the season. With the victory, Di Salvo is 2-0 to start the season. Jeke’s third period tally was the second of his professional career.