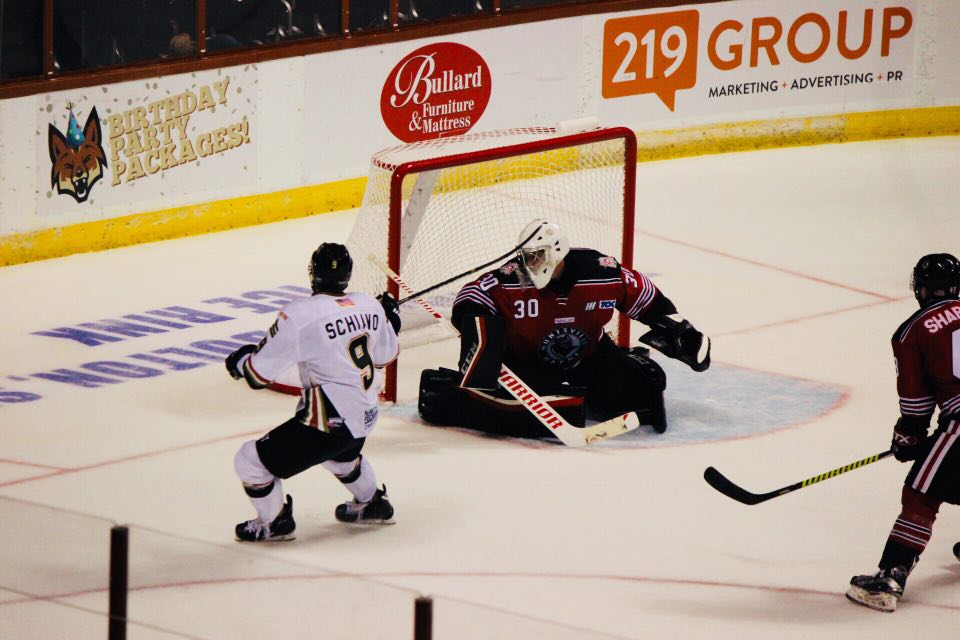 Huntsville, AL-  The Fayetteville Marksmen were unable to capitalize on their power play chances, going one-for-seven, while the Huntsville Havoc proved efficiency with the man-advantage, netting three goals on eight opportunities, helping them defeat the Marksmen, 8-3, despite being outshot 43-27, at Von Braun Center Friday night.

The Havoc utilized special teams to earn the game’s first score. In the late seconds of their first power play attempt, the Havoc cycled the puck around the right boards, back to the point for Nolan Kaiser, who blasted a one-timer over the glove of Matt Zenzola.

The power play unit continued to produce for the Havoc, helping them extend their lead to 2-0. Off the faceoff, Christian Powers won the draw back to Stuart Stefan, who patiently waited for traffic to cross in front of Zenzola, and ripped a slap-shot into the net.

Finding their first even-strength goal of the night, the Havoc used skilled passing to take a 3-0 lead, late in the first. Danny Smith fed a backhanded pass from near the goal line to Jack Ceglarski in the slot, who wristed a shot to the far corner.

Continuing the special teams’ onslaught, Huntsville extended their lead to four goals. While shorthanded, Alex Botten picked up a blocked shot, carried through the neutral zone and found Powers streaking up the left side, unmarked, and rocketed a shot from the top of the circles to end the first period.

Peter Di Salvo came in to start the second frame, ending Zenzola’s night. The Marksmen continued to carry play in the offensive zone and were rewarded with their efforts with a power play strike with 0.4 seconds left in the period. Jake Hauswirth pushed a pass from behind the net to Kyle McNeil at the top of the right circle, entering the slot. McNeil’s wrister elevated to the top corner, over Keegan Asmundson to make it a 4-1 game.

Just 1:11 into the third stanza, the Havoc took their second four-goal lead of the night. Tyler Piacentini drove the net of Di Salvo, lifting a shot on the pad of Di Salvo, that caromed off and to the tape of Carter Shinkaruk and into the open net.

Under two-minutes later, the Marksmen found their second marker of the contest. Brad Campagna rifled a shot from just inside the blueline and past Asmundson to make it 5-2. With that strike, Campagna earned the first professional goal of his career.

Continuing the seesaw scoring in the final frame, Peter Sikalis found the back of the net to give the Havoc a 6-2 lead. Finding the puck at the blueline along the leftwing boards, Sikalis let loose a howitzer that found its way past Di Salvo.

The Marksmen continued to battle and cut the deficit to 6-3 midway through the third. Ludlow Harris came streaking into the zone, pushed a shot on Asmundson, who left a rebound that found the stick of Ray Boudiette, who knocked two shots on net, eventually beating Asmundson for the first professional goal of his career.

Finding their third power play goal of the night, Huntsville made it 7-3 just past the midway point of the third. Moving the puck around the top of the zone, Derek Perl tipped a shot-pass over to Ceglarski for the one-timer at the top of the circle.

Giving the Havoc their final goal of the night, Kyle Sharkey made it an 8-3 game. Ceglarski carried into the zone on a two-on-one, fed a pass over to Sharkey who beat Di Salvo over the glove side.