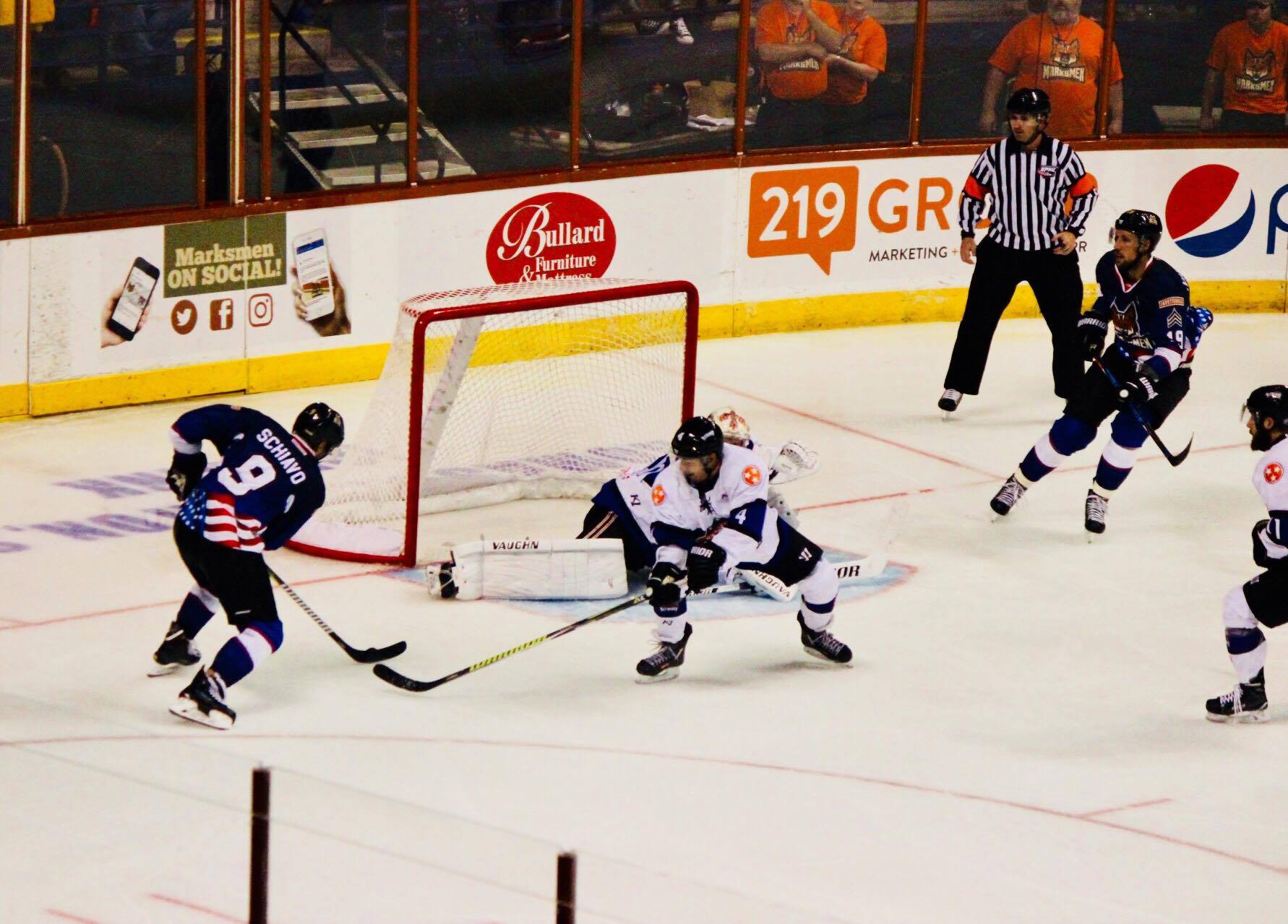 Both teams, coming off games from the night prior, felt each other out for the first portion of the first period. The Marksmen generated several high-quality scoring chances but were unable to slip anything past Zoltan Hentenyi, and the first period ended with a 0-0 score.

It didn’t take long for the Ice Bears to break the deadlock, striking for the game’s first tally just 2:16 into the middle frame. Streaking into the zone, David Branick pushed the puck up the right- wing board to Scott Berkley, who found Danny Cesarz with a cross-ice feed for the strike over the glove of Peter Di Salvo.

The penalty- kill continued to struggle for the Marksmen, and the Ice Bears exploited the unit to push their lead to 2-0, just over two minutes later. Utilizing crisp passing, Chris Izmirlian touched a pass to the slot, onto the tape of Evan Neugold, who then fed the puck into a tight window to Anthony Flaherty, who lifted the puck into the top corner.

The Marksmen clawed their way back into the contest with a Schiavo tally near the midway point of the period. Off an offensive zone faceoff, Hauswirth won the draw cleanly back to Schiavo, who one-timed a rocket to the back of the net.

Extending their lead to 3-1, the Ice Bears didn’t wait long to answer the Marksmen goal. While on the power play, Cesarz took the puck at the top of the left circle, hesitated on a slapper, eventually pushing a slap-pass to Josh Erickson, who was alone in front of Di Salvo for the tap in.

The final stanza of regulation opened with the Marksmen reducing their deficit to one, for the second time in the game. Travis Jeke held the puck in at the left point and lifted a saucer pass to the stick of Schiavo, who utilized his space to softly lift the puck over Hentenyi.

Gaining momentum with that goal, the Marksmen completed the comeback with their second power play goal of the game. Schiavo attempted a shot from the slot that sailed wide of the net, but found Jeke pinching in along the boards. The Ice Bears defense flooded to Jeke, who lifted a pass to Hauswirth. The captain flexed a wrister from the slot to make it 3-3.

Regulation time was not enough to determine a winner, so the game headed to three-on-three overtime. In the extra frame, each team traded chances, but the Ice Bears found the back of the net. Rushing into the Knoxville zone, Shane Bennett lost the handle of the puck, allowing Cesarz to pick it up and go end-to-end, freezing Di Salvo with a stutter move, and beating him low, for the 4-3 victory.

Game Notes: Hauswirth is on a five-game point-streak and has recorded multiple points in four of the five contests. This was the first time this season the Marksmen have gone to overtime. Schiavo recorded his first multipoint game of the season. Di Salvo stopped 37 of the 41 shots he faced.