Marksmen add another W over Macon 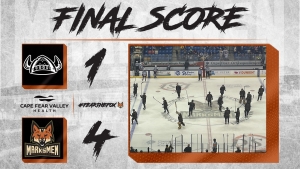 The game started fast and furious in the first period with the Marksmen outshooting the Mayhem 15-6 in the opening frame.

F.X. Girard scored the opening goal 9:03 into the period off a rebound from the end boards. Girard’s goal is his fifth of the season.

With under five minutes to go the Marksmen scored on back-to-back shots with Shane Bednard burying a puck from Bryan Moore and Taylor Best and then Tanner Froese scoring just moments later.

In the second period, the scoring train marched on with Alex Renaud notching a powerplay goal. Renaud would end the game with two points on his return trip from a callup to Jacksonville.

In the third period, Nigel Slade would break the shutout bid from Stefano Durante with a slapshot from the high slot. It’s Slade’s first goal of the season.

Durante turned away 21 of 22 shots and has allowed just a single goal in three of his last four starts, including a 33 save performance vs. Birmingham on Dec. 18.

With the win, the Marksmen have now won the season series over the Mayhem and are a perfect 8-0-0 vs. Macon.

The Marksmen and the Mayhem will face off against each other tomorrow night in Fayetteville on Jurassic Bark night. Tickets are still available and you can get yours by visiting marksmenhockey.com and clicking the tickets tab.

Marksmen fall at home to RYD Scroll to top