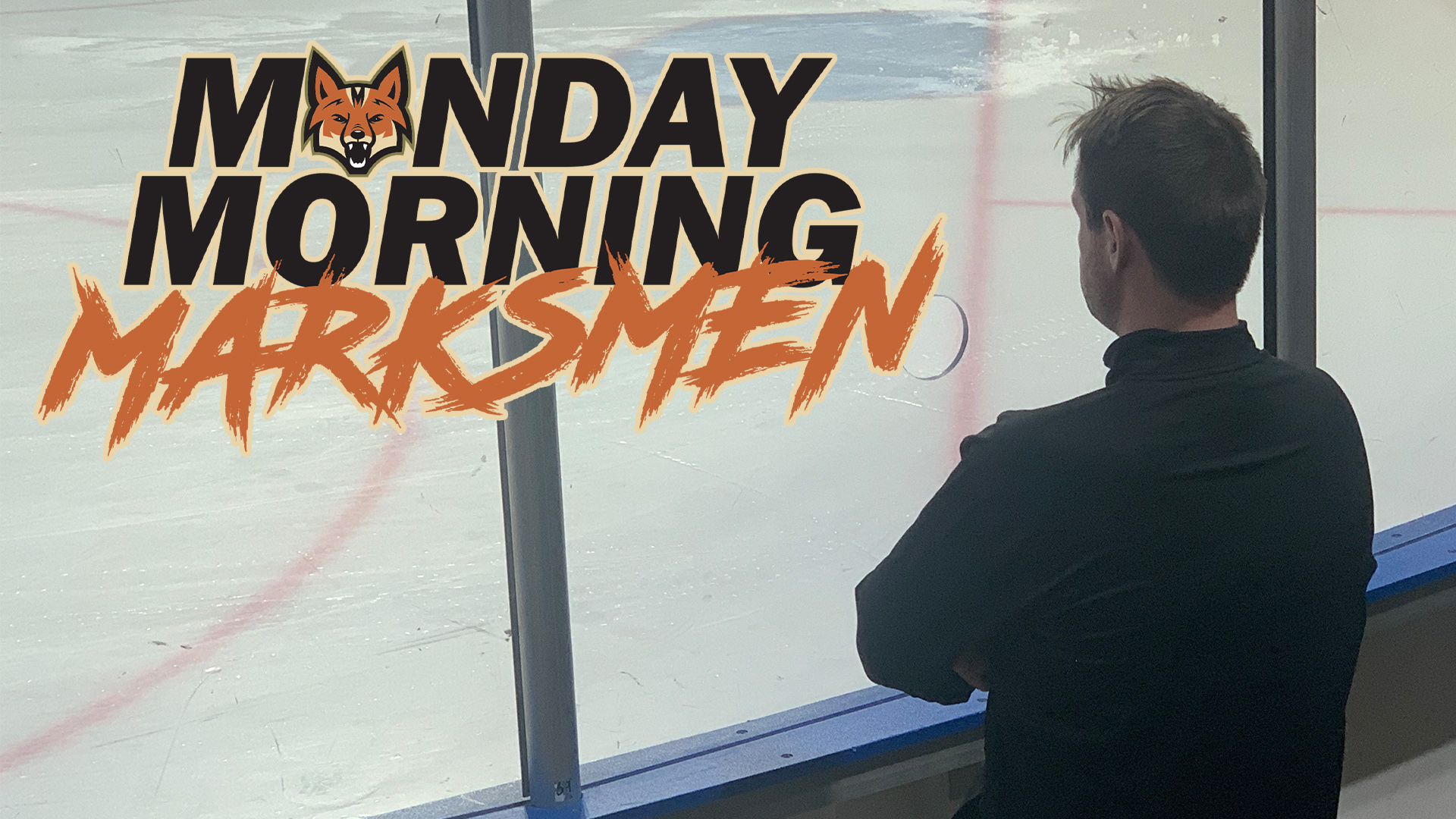 In a weekend filled with redemption, revenge, a “get-right” game and some memories of a full and loud crowd, the only way to summarize what the Marksmen had happened accurately is through a series of four-letter f-words.

It may not be the most artful way to tell the story of Thursday and Friday’s games, but it is accurate.

The way the Marksmen came out in the first 10 minutes of the first period on Thursday, you never would have been able to predict how the game would end.

On every shift in the opening handful of minutes, the Marksmen were speedy and created chances against a Roanoke team playing their best hockey right now. And then—

The second of our series of four-letter f-words. It happens that a team has a “clunker.” It’s not the end of the world that teams don’t win every game that they play, but in a rivalry game on the road after a break—it’s tough.

What followed in two-and-a-half periods was, for head coach Cory Melkert, unacceptable.

Melkert normally has the slightest tinge of humor in his voice. He picks, he jokes, he has the respect of the locker room, but in certain moments the humor is gone. The competitor returns (or more accurately takes over), and in the blink of an eye there is a wily vim to his gaze.

There was visible frustration after a loss in Roanoke, and reasonably so, but unable to change the past, the response becomes much more important.

Sitting next to the coaching staff on the way home, you can’t help but hear the change in tone from light to serious. The flicker of every video frame reflecting off assistant coach Jason Binkley’s glasses gave a fiery luster to his stare.

And for every stroke of artistic language, there comes a seam of truth—because what would follow would be the culmination of frustration for the Marksmen.

On a personal note, I attempt to gather my pre-game interview every game around 3 hours prior to the contest. Friday afternoon was no different except I was greeting by a locked door and echoes of an impassioned speech by the head coach.

Kyle Sherrill, the Marksmen athletic trainer, had the quote, “You go in there at your own peril.” I opted to forgo the interview with coach that afternoon.

It’s not flattering to walk in on a team at their worst, but those speeches (or lectures) have their purpose. When a team “hard resets” like that, you will know rather quickly thereafter where your locker room is.

If the Marksmen were to come out and win convincingly then you have reason to believe the team is fine and the culture is healthy. If the team shuts down, there are more deep-seeded issues.

There are just those moments that strike you when fans stream in the building.

A little girl leaning over the railing for a closer look at the ice. A little boy pulling his dad and saying, “Look, look! Hockey!” at the beginning of warmups. It’s the antithesis of the chaotic, pressure-packed world of the locker room downstairs.

And while each world at a glance is unrelated, when the team hits the ice, they collide.

Fans, you brought it on Friday. You were loud, you were tough, and man was it fun.

French for finished. After 60 minutes the Marksmen secured a 5-1 win over a middling Macon team, but more important than the result was the way in happened.

Defensively the Marksmen were solid, allowing only 18 shots on goal.

Offensively, the Marksmen blitzed the Mayhem, scoring on their chances and twice scoring in the momentum-shifting area of the final two minutes of a period.

The game wasn’t perfect, but for the coaching staff it was a positive step in what they call “the process.”

Success places a firm stepping stone in front of a team who will play more home games in January than in any other month. And as the most grueling days of the season approach, the Marksmen are in a good spot to attack their way up the standings.

For it to have been a weekend as it was, the step forward is progress and the new week means new opportunities to win, but more importantly to win the right way.

Marksmen add another W over Macon Scroll to top