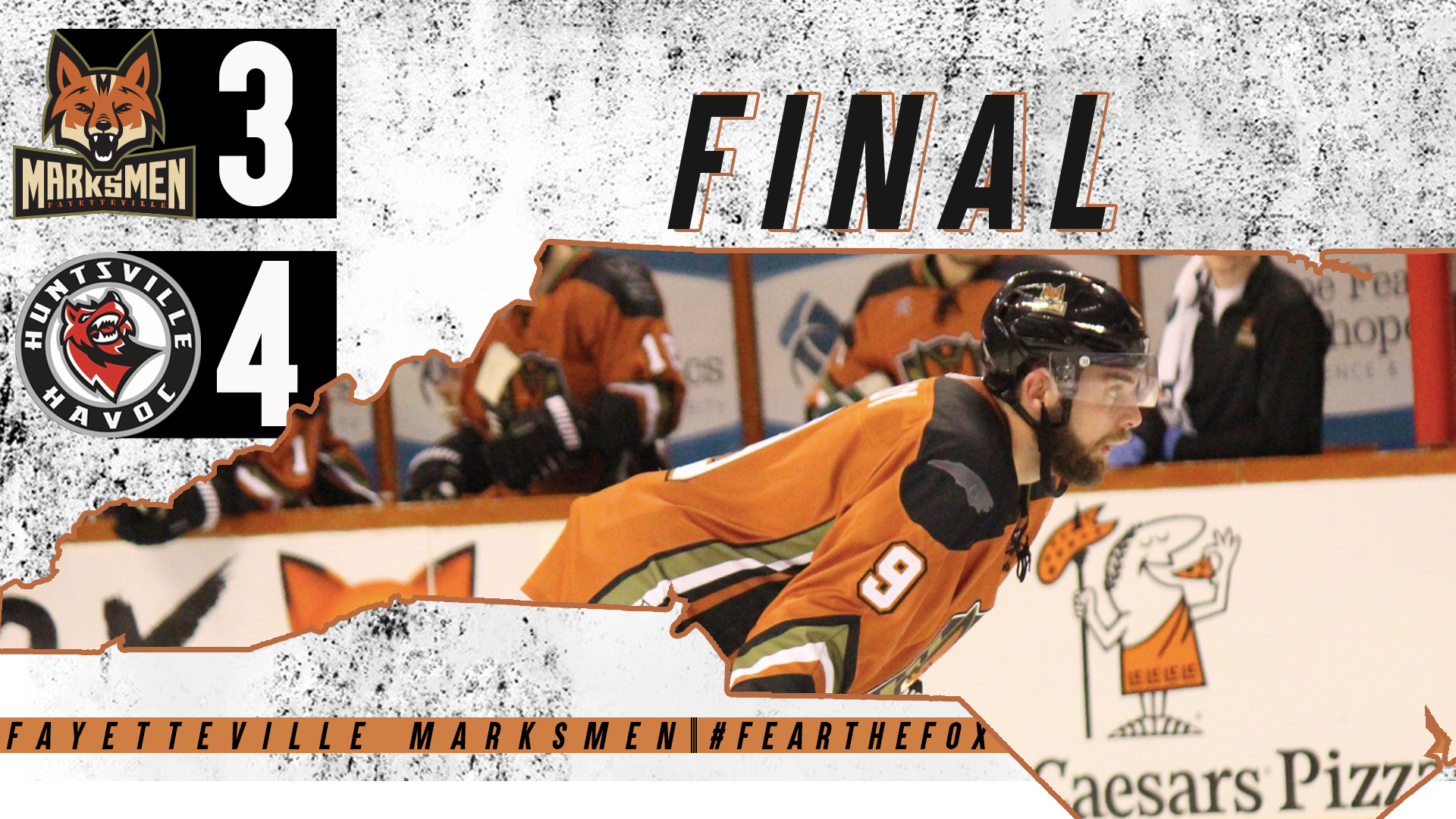 FAYETTEVILLE, N.C. – Fresh off the heels of a gut-punch of a 3-1 loss to Ronaoke on the road last night, Fayetteville would return to the All-American City to host the defending President Cup champion Huntsville Havoc for the first of a home-weekend. The titan-tilt would live entirely up to its admission price.
The first period between the student-and-teacher lead teams could only be described as a chess match. Back and forth action would play to nobodies favor, as traded blows would result in nothing on the scoresheet for either side. Goaltenders Max Milosek and Ben Halford would set the tone for what promised to be a game of earned goals, and after 20 minutes of play at the Crown, it would be a scoreless affair. Shots would favor the road Havoc 12-8, despite quality scoring chances from Shane Bednard and Max Cook.
In the second period, Fayetteville would flex its second-place ranking with an emphasis on the scoring side. After the back-and-forth first, the Marksmen would showcase their ability to adjust at the intermissions with a strong start. Ultimately, this would lead to first-blood being struck by the home team, as Nick Le Sage would crash the net and lift the puck to the twine. The rookie defensemen’s second of the season gave them a 1-0 lead, but they weren’t done yet. Minutes later, as Fayetteville continued their offensive display, Brian Bowen would secure a perfect pass to the tape of Brett Johnson’s stick on a breakaway, and he wouldn’t miss the opportunity to score against his old team, making it 2-0. Huntsville’s leading goal-scorer Shawn Bates would stop the bleeding not even a minute later, as his seventh of the season made it 2-1. Fayetteville would get the last laugh for the second, as Frankie Melton would strike on a quick-shot from the side for his fourth of the year. 40 minutes would expire with a 3-1 Marksmen lead.
Period three would not treat the Marksmen as well as the previous had. Early into the chaos-driven finale, familiar new-guy John Schiavo would see a puck sneak between the legs of Halford for an early strike, and make it a 3-2 game for nearly the entirety of the final period. A chippy and intense third period would conclude with an empty-net from the road team, and with :8.1 left in the game, the first goal of the season for Alec Brandrup would be blown past Halford. The two-goal intermission lead evaporated, and all the momentum toward the Havoc.
Overtime would see opportunities traded by both sides, but the hot hand doesn’t miss too often. Peter Sikalis would have plenty of real estate and a hard shot past Halford to give the Havoc an emotional come-from-behind road win, and keep their success against the Marksmen going. The loss, Fayetteville’s second-straight, marks them at 1-2 in OT on the season, and gives them their most heartbreaking loss of the season.
Fayetteville will have to channel short-memory, as these two foes meet again to conclude the weekend at 6:00 P.M. on Saturday night.
–

The Marksmen head home before the Holiday Season on December 14 at 6 P.M. for A PEANUTS CHRISTMAS / SOCKS AND UNDIES TOSS.

Rail Yard Dawgs Bite Back, Down Marksmen For First Time

Goaltender Ben Halford Called Up to Atlanta Scroll to top