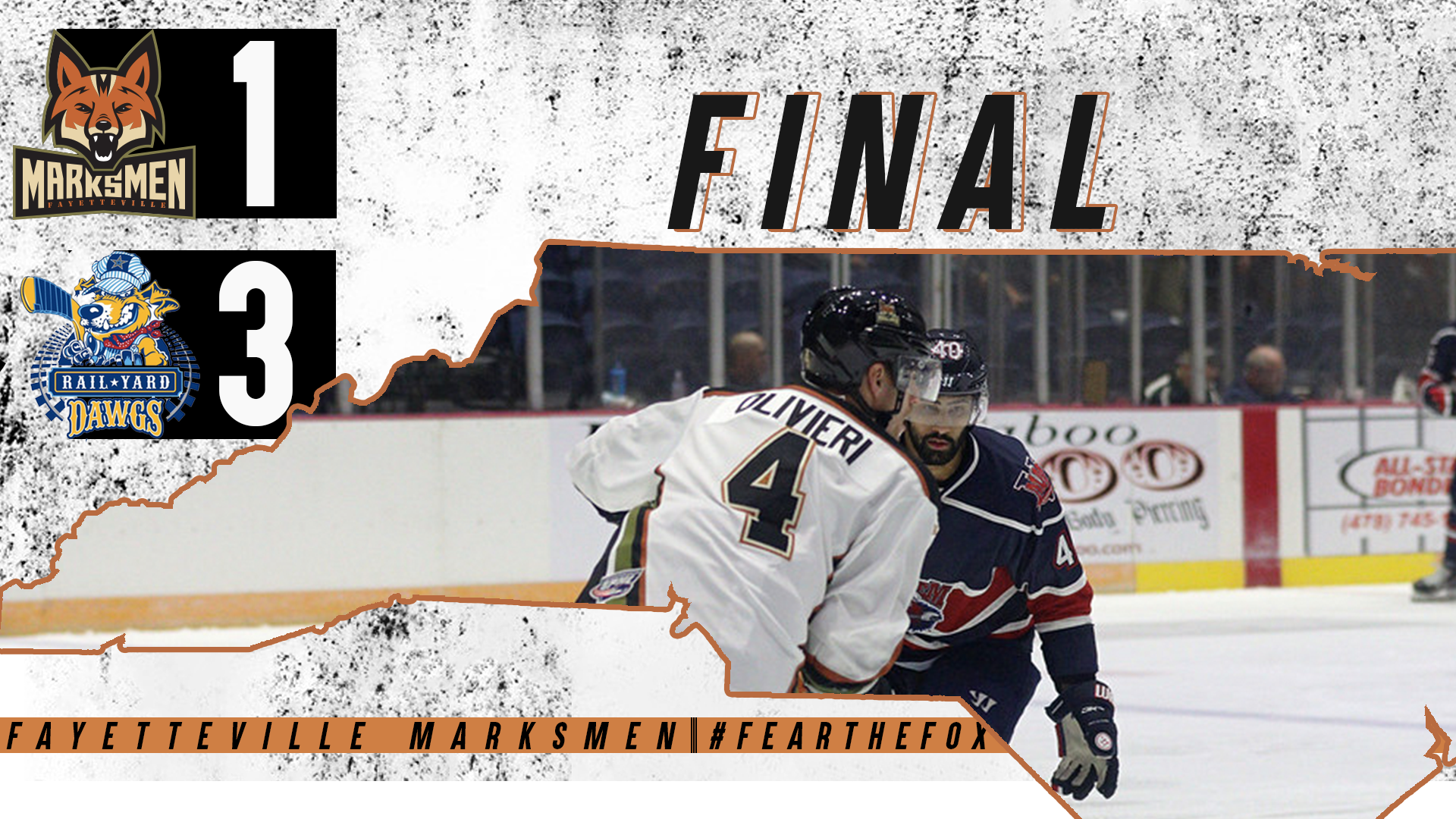 ROANOKE, VA – In the start of a tough three-in-three weekend for the team, the Fayetteville Marksmen would find their way to unfriendly confines in Roanoke, against a Rail Yard Dawg team looking to start one streak while breaking another.
The Marksmen would get off to a prototypical start for them; heavy shots and long time-of-possession in their offensive end. Before the halfway mark of the first, the team was already outshooting the home Dawgs 9-1, and showing no signs of stopping. Following a blown-dead goal for an obvious high-stick, the winds would start to lessen on the Marksmen sails, and the Rail Yard Dawgs would claw back into the shots category. A scoreless first period would feel like a Roanoke win, despite being outshot 12-3.
Period two would see a flat-start for the Marksmen would see them start to trail-behind in the momentum department, as Roanoke would come ready to play. In a more back-than-forth first nine minutes, Austin Daae would strike for his first as a Rail Yard Dawg – second of the season – on the powerplay and give the Dawgs a gut-punch of a 1-0 lead. Fayetteville would finish the second period playing catch-up, as they’d finish in the shots department 8-7 in the second, but down by a goal heading to the penultimate period.
A classic comeback was set up in the script for the Marksmen heading into the third, but the road foxes couldn’t get out of their own way any time they’d get momentum. With three untimely penalties in the period, the Rail Yard Dawgs would get a huge insurance goal from Lincoln Griffin to make it 2-0 with under ten to go – another powerplay goal. Fayetteville’s desperation would start to amount, as they’d furiously fight in their offensive end, before Brian Bowen would find his third-in-two-games and 10th of the season off of a redirect with just under four minutes to go. Immediately on the ensuing faceoff, Fayetteville would draw for a tripping minor, and they’d spend their next two minutes on the Penalty Kill. After killing the penalty off, 90 seconds would remain with a Marksmen empty net. A heavy-handed offensive attack would find some stellar opportunities for the Marksmen, but Jacob Theut in Roanoke’s net would do enough to allow for his offense to shoot one down the ice for a nail-in-the-coffin empty-netter.
Fayetteville would drop their first of the season to Roanoke 3-1, and fall to 11-3-1 on the season. This would result in the second-straight win on home ice for the Dawgs, and allow them their first consecutive wins of the year. The weekend doesn’t get any easier for the Marksmen, as they return home late this evening with the defending President Cup Huntsville Havoc waiting for them at the Crown Coliseum
–