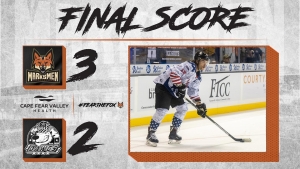 The game started with Mac Jansen scoring on a deflected shot from Sean Leonard. Jansen’s goal is the fourth he’s scored in the last two games vs. the Marksmen.

Roanoke would go on to outshoot the Marksmen 14-7 in the opening frame, but they would not have the lead.

Don Olivieri blistered a power-play slapshot by Brody Claeys to tie the game at one. Olivieri’s goal was assist by Adrian College graduates Taylor McCloy and Matt McNair.

Through the second period, Jason Pawloski shut the door. After being pulled through 40 minutes of hockey on Wednesday, Pawloski ended the game with 38 saves on 40 shots and his ninth win of the season.

Late in the third period, Bryce Ferrell collected the puck at the top of the faceoff circles and beat Claeys to take the lead with 4:17 to go in the game.

Just seconds later, Taylor Best scored on a two-on-one feed from McCloy to extend the lead to 3-1.

While Jeff Jones would score with 59 seconds left to make it a one-goal game, Roanoke would not have another scoring chance as the clock bled out.

The Marksmen are now 3-1 vs. the Rail Yard Dawgs on the season and have won all three vs. Roanoke at Berglund Center.

Fayetteville advances to 10-4-0 and remains fourth in the SPHL while Roanoke falls to 4-4-4 and still occupies seventh.

The two teams will meet Friday and Saturday in Fayetteville at the Crown Coliseum on Friday, December 3 and Saturday, December 4. Tickets are still available in limited quantities for both games, and you can get yours by clicking the tickets tab at marksmenhockey.com.