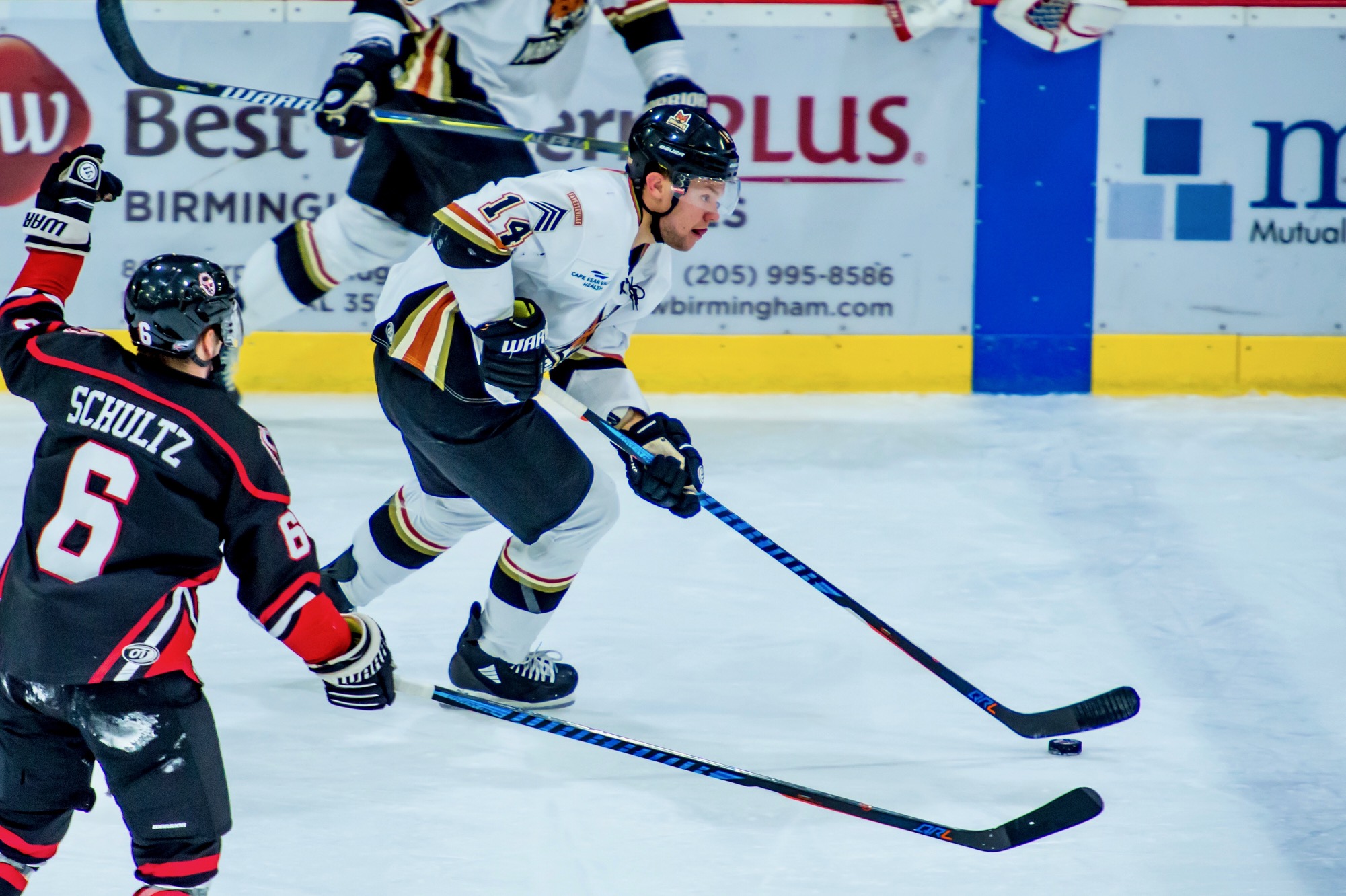 Birmingham, AL– Dakota Kletcha netted the hat-trick and was one of four Fayetteville Marksmen skaters to register a multi-point night, leading the Marksmen past the Birmingham Bulls, 5-2, at the Pelham Civic Complex Friday night.

For just the eighth time this season, the Marksmen were the aggressor to open the game, and opened the scoring just over three-minutes into the contest. While time was winding down on a four-on-four situation, Junior Harris drove low, below the goal line, and pushed a backhanded feed to the slot where Klecha was primed for a one-timer to the back of the net.

Extending their lead moments later on the man-advantage, Klecha earned his second tally of the evening. Cycling the puck around the zone, Bryan Dallaire rifled a slapshot from the point that deflected off the stick of Klecha, who had camped out in front of Charlie Millen.

The Bulls battled back late in the period, swinging momentum in their favor, cutting the deficit to 2-1. A long shot from the right point off the tape of Sean Gammage was stopped by Patrick Spano with the pad, however the rebound trickled to the slot, where Justin Larson found room and trickled home a backhanded wrister.

Much like the opening frame, it didn’t take long for the Marksmen to find the back of the net to begin the middle stanza. Jamie Hill took the loose puck through the neutral zone, displayed creative stickhandling, working his way around a Bulls’ defender, and patiently waited for Millen to commit, eventually lifting the puck over the outstretched body of the Birmingham netminder.

In what could be considered their best performance of the season, the Marksmen extended their lead to 4-1, midway through the middle frame. Working a three-on-two into the zone, Harris pitched a backhander to Jake Hauswirth, who unloaded a booming slapper from the top of the circle, beating Millen cleanly over the glove.

Only 1:17 later, the Marksmen extended their lead to 5-1, with a shorthanded, hat-trick tally from Klecha. With a blocked shot attempt at the point, Ryan Patsch rushed through the neutral zone with Klecha on a two-on-one break. Entering the zone, Patsch flipped the puck to Klecha, who walked in on Millen, used a between-the-legs move and pushed the puck through the pads of the netminder.

Halting the Marksmen onslaught, the Bulls made it a 5-2 game with a power play strike in the early portion of the final stanza. Josh Harris picked up the rebound and punched home his 14th of the season, but it was all for not, as the Marksmen deployed a staunch defense and skated away with the 5-2 victory.

Marksmen Battle Back Early, Fade Late in Defeat to Mayhem