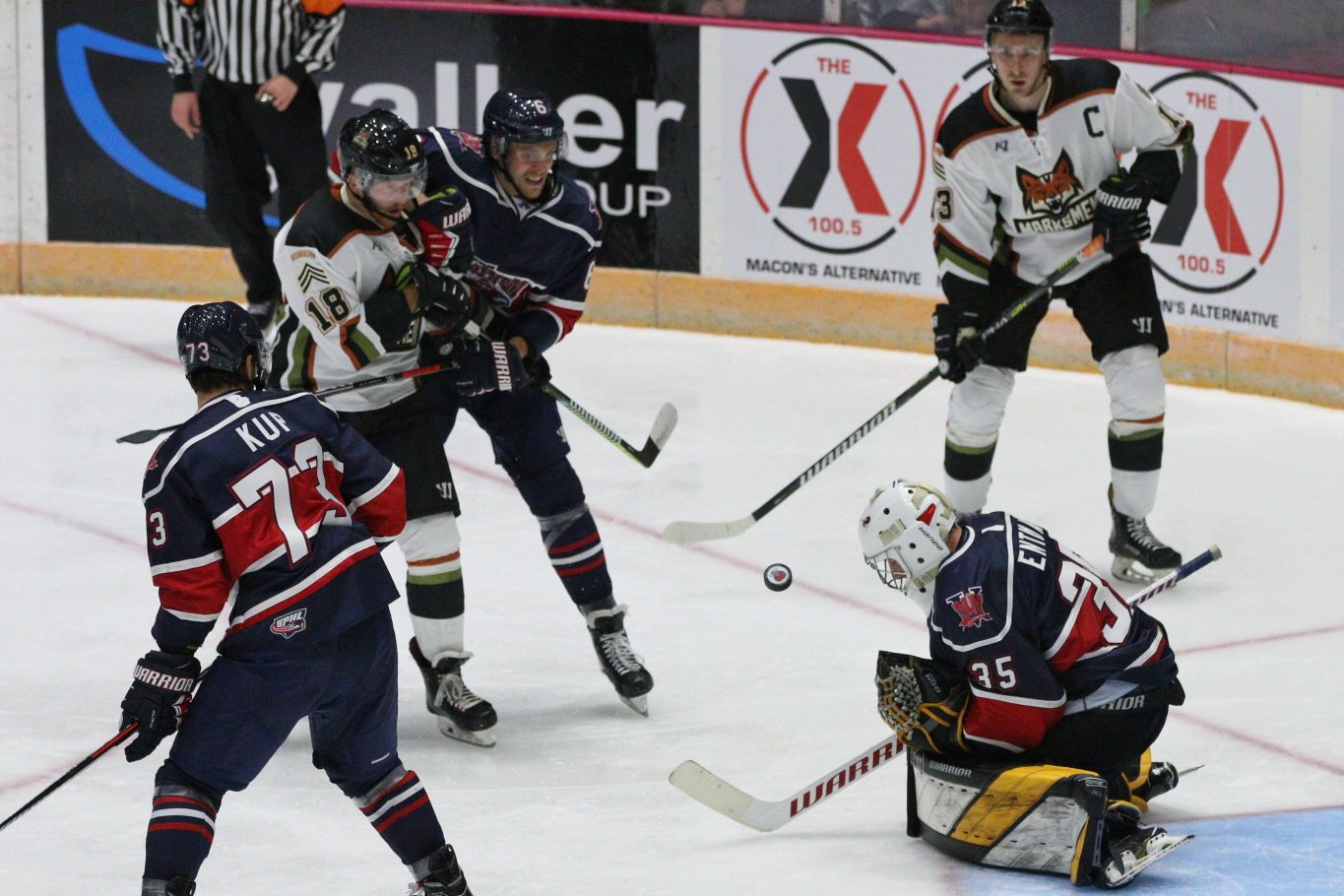 MACON, GA – Young lungs prevail for the Marksmen in Macon, as it takes extra time to complete the comeback over the Mayhem.

Fayetteville entered Friday nights affair in middle-Georgia with a new-look roster, an entirely new captaincy staff, and a road game to kick off their Southern Professional Hockey League campaign. After naming Max Cook (C) & Travis Jeke (A) captains on Sunday, the two would be catalysts for a come-from-behind victory.

After an eventful first period saw the two teams trading chances, and the Marksmen getting two power play opportunities, there’d be no dice decided after 20, with Macon and Fayetteville heading to the break in a scoreless tie, shots even at 12 apiece.

Period two would take a turn for the worse for Fayetteville, as the Mayhem would start to flex their veteran muscles and control the pace of play, possession, and momentum nearly the whole way. The scoreless tie would finally come to an end as Pensacola-transfer Josh Cousineau would score his first with the Mayhem 6:29 into the second period. Nearly seven minutes later, late-season asset Marcus Ortiz would make it a 2-0 game. With their backs way against the wall, Fayetteville would get their third power play chance of the night, and Alternate Captain Travis Jeke would pick up right where his SPHL Defenseman of the Year season left off from the previous season, scoring a power play goal in the mid-slot from a great Cook pass with 4:51 to go in the first. Period 2 would end 2-1 Macon.

In the third period, Fayetteville would mount their comeback effort to the end. On an early power play effort, Captain Max Cook would find himself open on the left side for a PPG 2:23 into the period. The Marksmen would acquire another two power plays before the games end, but couldn’t cash in. The Marksmen goaltending and defense would push themselves to the limit to force an overtime period, and the offense would work to find a way, but ultimately, it would take another five minutes to decide.

In overtime, Fayetteville would control the puck for most of the period, with plenty of opportunities that made it seem like the Marksmen would complete the comeback – most noticeably, Travis Jeke’s crossbar dinger. However, Jeke would get his vengeance minutes later, as Luke Stork would set up a perfect feed to Jeke on a backhand to the low slot to put it away.

A two-goal night for Jeke would lift the Marksmen to an unlikely-feeling comeback win. A huge mark to the new season for the Alternate Captain, and already 33 percent of the way to his goal-total from the previous.

The Marksmen return home from Macon tonight, and get a short-night sleep before opening the home portion of their schedule against Knoxville on Saturday night at 6 pm. Tickets are for sale NOW by calling (910) 321-0123 or by heading to the Crown Box Office.