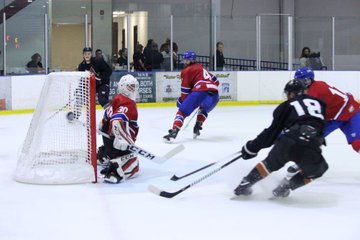 FORT BRAGG, N.C. – A year of preparation, months of anticipation, and a day to be remembered for a lifetime.

While many of the final roster implications were to be decided for the Fayetteville Marksmen and Roanoke Rail Yard Dawgs yesterday, this moment in history would prove to be something bigger than an exhibition contest between two rival teams. It would serve as a footnote in the history of the proud sport of hockey, and of a cornerstone of American culture: our proud military heritage.

Fort Bragg’s Cleland Ice Arena opened its doors for hundred upon hundreds of hockey fans – most for Fayetteville, some for Roanoke, and all awaiting to see a spectacle of a lifetime; the first-ever professional hockey game on a Military Installation in history.

As the pregame partiers from the impromptu Beer Garden in front of the arena piled into the chilly bleachers of the decades-old historic rink, the atmosphere started to already tease the fever-pitch that would surmount when the game puck dropped. Following a pair of ceremonial puck drops from Fort Bragg’s finest with Southern Professional Hockey League Commissioner Doug Price, and a ensuing puck drop from Roanoke President Mickey Gray and Fayetteville Owner Chuck Norris, it would be game time.

Roanoke would control the pace of play in the first five minutes, keeping the Marksmen shot-less until the first media timeout. Following this stoppage, Fayetteville would take their first shot, and get their feet under them. In the ensuing five minutes, the Marksmen would put up the next five shots, and first two goals.

Aaron Huffnagle responsible for the goal of a lifetime, taking a bouncing puck off the boards down the slope for a breakaway goal against Roanoke’s Theut. Minutes later, Huffnagle would keep his fingerprints all over the score-sheet with a shot-pass that redirected off of Johnny Ruiz for the game’s second goal. Fayetteville would take a 2-0 lead into the locker room, leading in shots 12-6.

Period two would be back and forth, with Roanoke having most of the shooting momentum, but the Marksmen once again making their shots count with a breakaway goal from the impressive-looking Buckeye, Luke Stork. Fayetteville would take its 3-0 lead to the final period.

Period three would see the end of the night for Marksmen goaltender Danny Tirone, who pitched a 17-save shutout enroute to earning the win. Jake Moore, a goaltender no stranger to the Marksmen sweater, would close out the game, allowing just a goal on a furious final minutes effort from Roanoke, as late roster addition CJ Stubbs would prevent the shutout.

While Fayetteville would finish the game outshot 24-23, the final buzzer sounded, securing them the victors of the Fort Bragg Classic, and truly securing home base, 3-1. This historic night saw many dynamic performances, and showed the young Marksmen team is hungry to prove itself heading into its second-season under Head Coach Jesse Kallechy.

Moreover, while the score and players of this game may be forgotten in the annals of history, the historic event on October 12, 2019 at the world’s largest military installation will not be forgotten. This was a moment in history, and one that surely will never be forgotten from those lucky enough to have any small part of it.

The Fayetteville Marksmen 2019-2020 season starts in Macon, GA against the Mayhem on Friday, October 18. The team returns home for Opening Night at the newly-renovated Crown Coliseum on Saturday, October 19 at 6 PM. This home-showing for the Marksmen will be the biggest in team history, with a FREE Magnet Schedule giveaway to the first 1500 fans, ceremonial puck drop by WWE Legend Sgt. Slaughter, our largest Girl Scout celebration yet, and so much more, it’s one to not be missed. Tickets are on-sale NOW at MarksmenHockey.com or by calling (910) 321-0123.