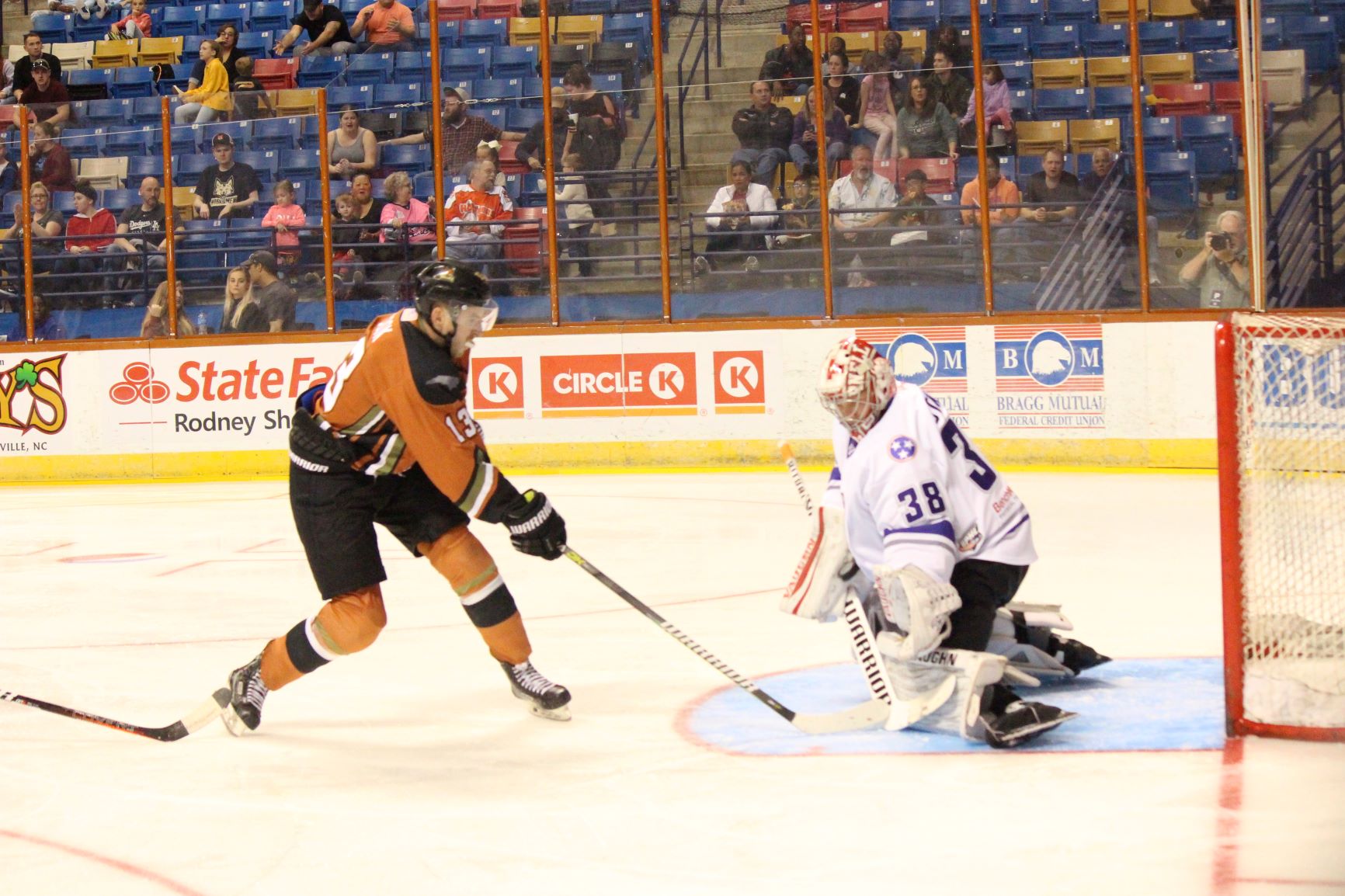 FAYETTEVILLE, N.C. – Following a late-night win in Macon, the Marksmen would arrive home late Saturday morning ready to start their home-portion of the schedule.

With high-anticipation from the hometown crowd following an exciting overtime victory, the Marksmen would come out of the gate ready to jump against the Knoxville Ice Bears, downtrodden from a loss to Evansville at home. It wouldn’t take long for the Marksmen to make noise.

After being outshot 4-0 in the first five minutes, the Marksmen would start to flex in the offensive department. With 6:57 off the clock, North Carolina-native Kyle Moore would score his first professional goal with a beautiful strong-armed breakaway goal to take a 1-0 lead. After a strong finish from the Ice Bears in the period, the Marksmen would take a goal lead to the break, but fall behind in the shots category 16-6. Both teams would fail to convert on their two power play opportunities.

Period two would once again see the Marksmen fall flat on their face, giving up an additional three power play opportunities to the Ice Bears while allowing three goals. The lone bright spot of period would be the dropping of gloves from Malcolm Hayes, who would obliterate his opponent with a deadly blow to the face before pumping up the crowd. Knoxville’s Marty Quince would put up a pair of goals in less than two minutes near the halfway point of the second period to jump out to a 2-1 lead, including one on the PP. With less than a minute remaining in the period, veteran-Defenseman Jason Price would put up a decisive third goal for the period.

Fayetteville would once again find their stride in the third period, and start the comeback effort early. With not even two minutes gone by in the third, Luke Stork would get himself on the board with a perfect feed from Hayes. 6:03 later, Alec Marsh would bang home a rebound on the backhand for a knotted up game. An intense finish to the period with chances on both ends would take the Marksmen to overtime for the second night in a row.

A back-and-forth overtime saw Marksmen stud-goaltender Danny Tirone amass another pair of highlight reel saves. On an odd-man rush the opposite way, Taylor McCloy would fire one off the glove of Knoxville goaltender Hayden Stewart, redirected up the ice for Bryce Nielsen to breakaway for the game-winning goal on the glove side of Tirone.

Fayetteville would take another point out of the weekend, but take their first OTL of the year against a tough Knoxville team. The Marksmen return to Rocky Top, Tennessee to rematch with the Ice Bears on Friday night before a Saturday night trip to Roanoke.