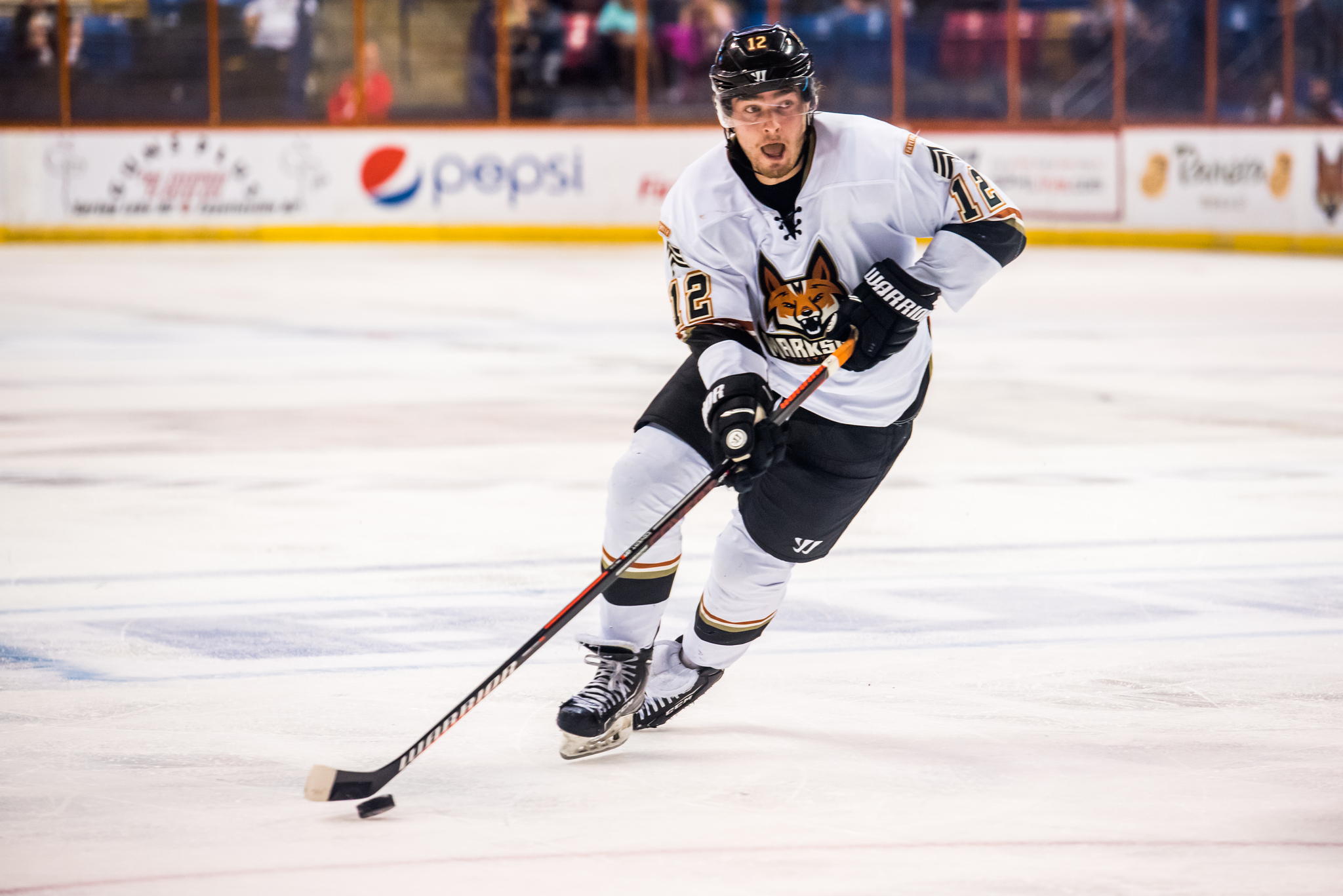 ROANOKE, VA – In the ninth meeting between the Marksmen and Rail Yard Dawgs, the classic-narrative of close games came through once again. Fayetteville had just 23 shots-on-goal, but three of those were the ones that mattered most.

As the puck dropped in the Berglund Center, the Marksmen and Rail Yard Dawgs were both looking to continue their recent good fortune. Fayetteville wanted to start hot and keep the momentum of the streak on their side; they did just that early on. The Marksmen claimed the first five shots-on-goal, with the fifth shot being a Cody Brown (6) goal. With an early lead the Marksmen, Goaltender Nathan Perry, who was making his second start in the SPHL, was able to have a slight pressure off his shoulders. With just a little above three minutes remaining in the first period, Zach Nieminen picked up his sixth goal of the season, after Travis Jeke appeared to have been boarded, creating a cluster in front of the net that Perry could only hold off for so long. With Roanoke’s goal, the first concluded at 1-1.

The second period was a very busy one for the Marksmen. Having six men in the penalty box throughout the period, they needed to fix their errors and fast. Roanoke’s Nate O’Brien was sent to the penalty box for a slashing penalty with just a few minutes left in the second – a costly man-down for the Dawgs. The newest Marksmen forward Taylor McCloy would prove to be the catalyst on this powerplay, finding a lane to shoot from, and allowing Darren McCormick to bat it out of the air for the leading-goal into the intermission; Fayetteville up 2-1.

The start of the third period was a one-sided one in favor of the Dawgs. The Rail Yard Dawgs owned the first six of seven shots-on-goal. Jesse Schwartz, fresh from a line change, would find the puck loose at center ice, and be alone on a break to the net, capitalizing on the misfortune and knotting things up. It would stay at a 2-2 game close to the end, with this goal being scored with still 12 minutes left.

Needing a goal, the Leadership Line would take an offensive-zone draw with 5:30 to go. Captain Jake Hauswirth won it over, and Brian Bowen ripped a shot off a second later, getting it past Tanner Creel. Bowen’s sixth of the season gave the Marksmen a 3-2 lead late in the third.

With jumbled communication and confusion in the final two minutes, Roanoke would struggle to put together a consistent, offensive-effort despite the extra man on the ice, and Paul Fregeau would stick the puck to the corner boards to seal the victory, 3-2.

Fayetteville’s sixth-straight win, fourth straight on the road, and second straight over Roanoke. With this victory, the Marksmen jump Roanoke in the standings, now at sixth place.

The Marksmen are back home TONIGHT for our Pucks and Pups Night (pres. by North Star Veterinary Hospital) at 6 P.M, featuring the HILARIOUS hi-jinx of the Wiener Dog Races (pres. by Woof Gang Bakery), and with the chance to bring your dog to the game for just $5.

You won’t want to miss the Marksmen’s FIRST home game of 2019, as they look to go for their seventh-straight victory.