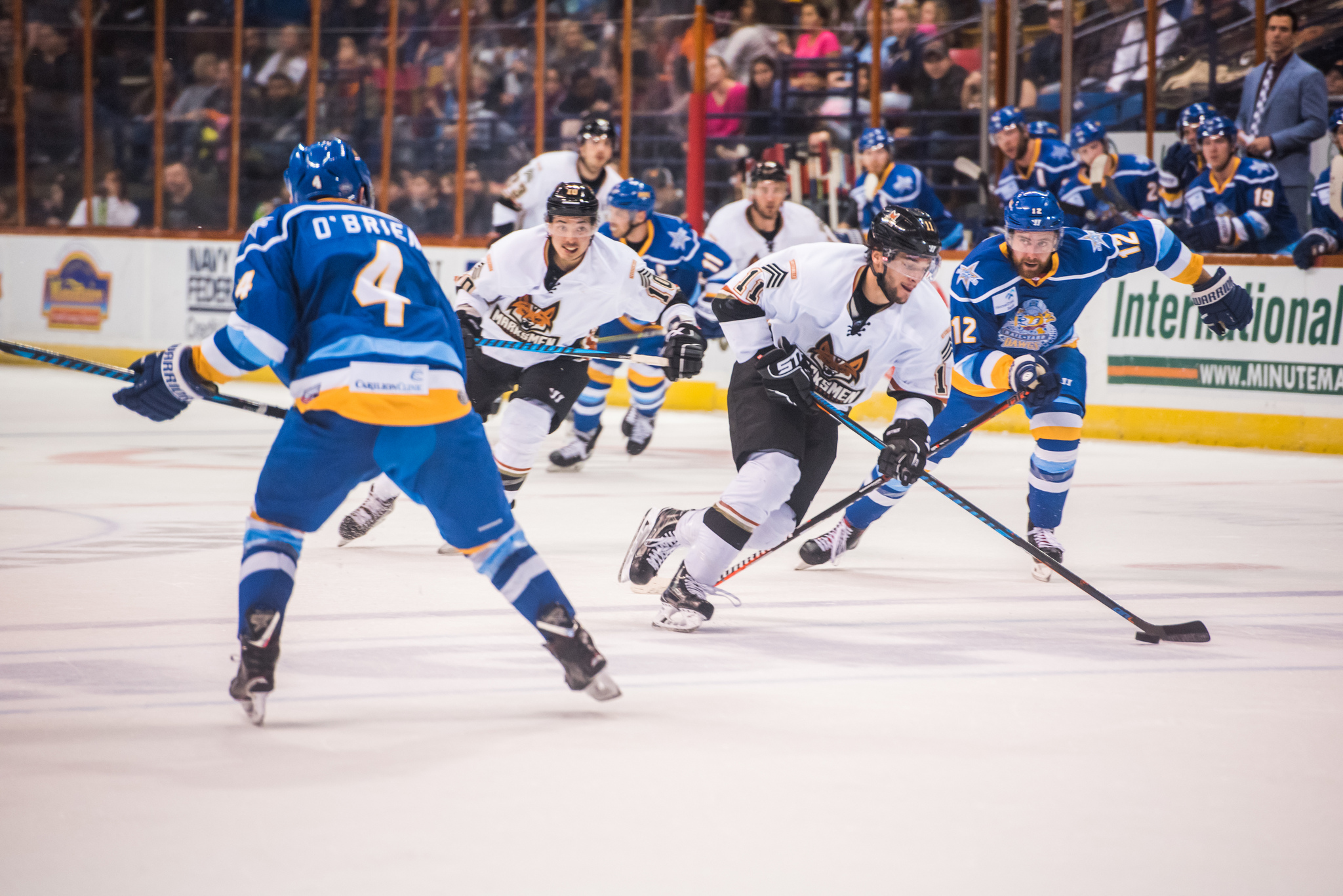 FAYETTEVILLE, N.C. – With a five-game win streak heading into this weekend’s home-and-home action against the Rail Yard Dawgs, the Marksmen are riding on an all-time high. With the longest win streak in team history and tied with last season’s wins (12-11-3) not even halfway through the season, the ceiling is high for the team.

When you play great hockey however, you’re always on the radar to get called up. That’s exactly what happened to rookie goaltender Dillon Kelley who was called up to ECHL Adirondack Thunder. With Kelley playing in the E, that left an opening in the goalie-core for the Marksmen. Head Coach Jesse Kallechy decided to make a trade late in the week, acquiring Huntsville Havoc goaltender Cody Porter for future considerations.

Captain Jake Hauswirth continues to lead the charge in the high-powered Fayetteville offensive, scoring seven goals in the last eight games. Leading scoring-defensemen Travis Jeke is a major threat any time he’s on the ice, scoring five goals and fifteen assists on the season. One of Jeke’s fifteen assists came last Saturday night when he ripped one from the blue line that ended up getting tipped in by Hauswirth – a designed play by the duo.

Darren McCormick was awarded the First Command Proven Performance Player of the Week for continuing to be one of the league’s leading scorers. With the game-winning goal in Friday’s remarkable-comeback against the Ice Flyers, McCormick did what he does best: score. Mistakes will prove to be costly for the opposition as the Marksmen are third in the league on the power play.

The Rail Yard Dawgs look to write a new chapter to this seemingly even rivalry: tied at 4-4. Sweeping the Macon Mayhem last weekend, Roanoke enters this weekend with a streak of their own. Nate O’Brien and Jordan Carvalho both had a goal and an assist last weekend, while Jesse Schwartz picked up two goals in one game. Much like all season, Colin Murray is one to watch out for. Murray is the leading scorer for the Dawgs with eleven goals and ten assists, the Marksmen will want to keep Murray on a short leash. As aforementioned, the Marksmen are one of the best in the league on the power play, creating more concern for the penalty kill unit for Roanoke who is currently the worst in the league (10th).

Join our friends at On-After Sports Bar & Grub for the official “Home Away from Home” Marksmen watch party tonight at 7:05 P.M, with great food and drink specials, and a lively fan atmosphere.

If you can’t make it out to On-After, you can always tune in on SPHL Live ($) or on the Marksmen Radio Network as the “Voice of the Marksmen” Shawn Bednard calls all the action.

The Marksmen are back home on Saturday Jan. 12th for our Pucks and Pups Night at 6 P.M, featuring the HILARIOUS hi-jinx of the Wiener Dog Races, and with the ability to bring your dog to the game for just $5.