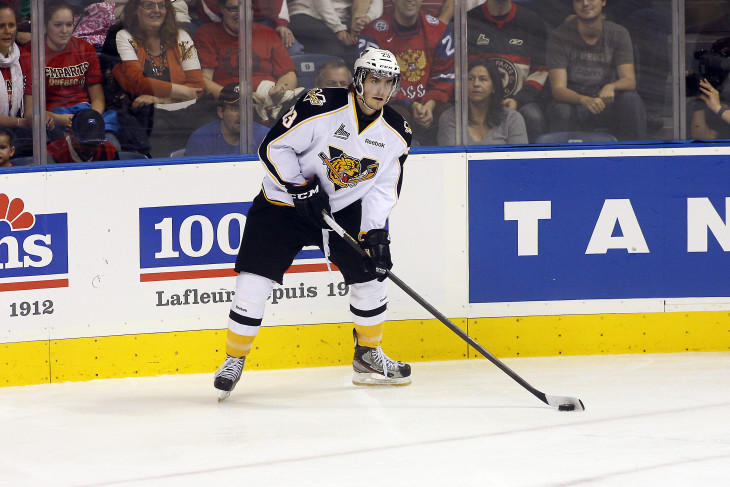 Boucher, 22, has never played a single minute in the United States, but is of North American descent, being born in Mercier, Quebec, Canada. He spent most of his hockey career around the high-level hockey in scene in Quebec, before graduating to France2 and France3 for his professional career.

A 6’3, 198 pound left-handed defensemen, Boucher started off in the Quebec Midget AAA Hockey League with the Châteauguay Grenadiers in 2011, where he put up 9 points (2G+7A) in 43 games, impressing scouts in the premier Jr. A hockey league of Quebec, the QMJHL. Starting at just 16 years old, Boucher would spend two seasons with the Victoriaville Tigres, where he accumulated 11 points (2G+9A) in 102 games. Following his two years in the Q, he would find his way into the QJAAAHL, or Quebec Junior Hockey League, where he’d finish his junior hockey career with the Lachine Maroons (2014) and the Sainte-Agathe Montagnards (2015-16), finding his way to an astounding 45 points (9G+36A) in just 44 games played.

With a fantastic finish to his junior hockey career, the well-respected Fédération Française de Hockey sur Glace (En: French Ice Hockey Federation, or simply FFHG) would come calling to Boucher, in the form of the league’s second division (France2). He started his professional hockey career with the Hockey Clermont Communaute Auvergne, where he finished with 9 points (4G+5A) in 24 games, before moving down the next season to France3’s Toulouse-Blagnac HC Les Belougas, putting up an impressive point-per-game with 18 points (5G+13A) in 18 games.

From the long journey between high-level Canadian Junior leagues, to a respected French Professional league, Boucher now finds himself donning the Orange and Black as a Marksmen.

For Boucher, the opportunity to return to his home continent and play professional hockey back across the pond was too good to pass up, especially with the base he was joining.

“I’m very excited to join the Marksmen. My last two years in France was a very nice experience, but i felt it was the time to come back to North America. I got a call from Coach [Peter] Worrell and he told me everything about the hockey environment in Fayetteville. I took a few days to think about it and decided to join,” said Boucher “Back in my junior days, I would’ve told you that I was a stay home defenseman, but with my two pro years in France, I think I increased a lot in the offensive part of my game. I would say I’ll be a complete two-way defenseman for the Marksmen. I can’t wait to see the team and the fans in October!”

Head Coach Jesse Kallechy spoke highly of the international player, and what he can bring to the offensive-minded defense.

“We are ecstatic to get Felix signed for the 2018-2019 season. He is a big body who skates extremely well, and will bring a lot of skill and an offensive component to our defensive unit,” said Kallechy “We will highly encourage our defensemen to be a part of the offense this season, and we believe that Carl fits that mold perfectly.  We can’t wait to see what Felix will accomplish this season in a Marksmen jersey.”

With 49 days remaining until the SPHL season begins, the anticipation is starting to reach a fever pitch, especially as the Marksmen Camp roster starts to finalize.

The Fayetteville Marksmen are excited to welcome Felix Boucher to his new home for the 2018-19 season, and look forward to him being the bedrock of what promises to be an exciting season of hockey in the Cape Fear. The 2018-19 Marksmen Home Opener is October 19th against the Roanoke Rail Yard Dawgs, and Season Tickets are on sale NOW!