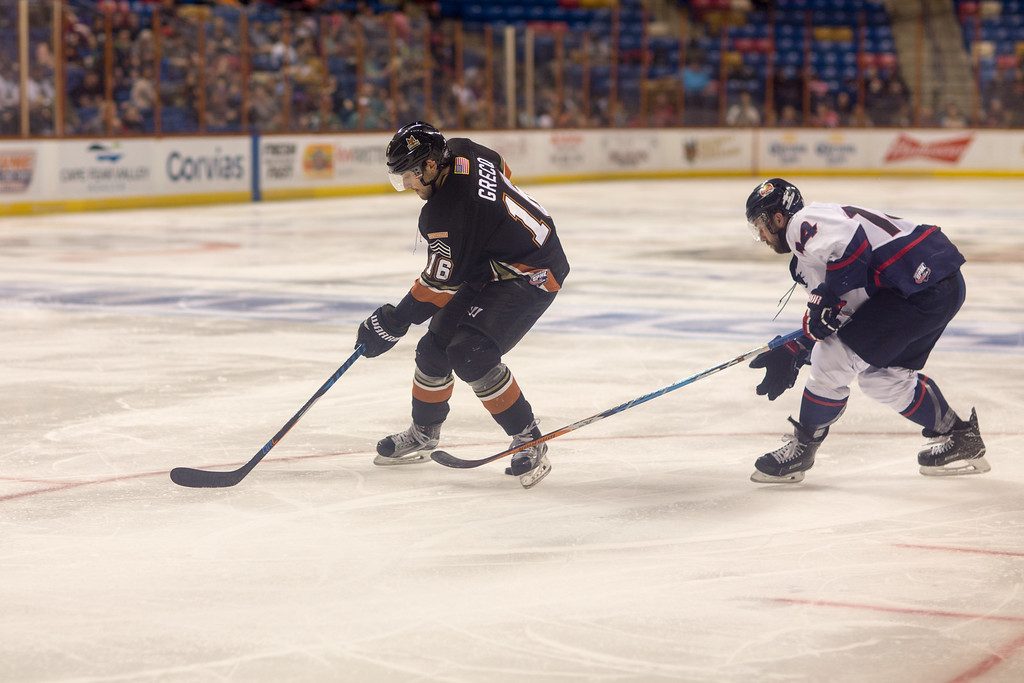 FAYETTEVILLE, N.C. – Carl Greco had a busy first few months of 2018. Finishing off his final season as a Junior at Westfield State University on February 24, Greco found himself a few weeks later suiting up for his first ever professional hockey game with Fayetteville against the Evansville Thunderbolts on March 10, where he’d come up with an assist for his first professional point.

He would go on to finish out the final nine games of the Marksmen, accumulating five points (1G+4A) in the two handfuls of games.

After being on the protected list early in the off-season, today the club officially announces that the young veteran heads into his first full professional season in the orange and black.

Greco is a 6’0, 170lb defenseman from Niagara Falls, Ontario, Canada who spent three seasons with the Westfield State Owls (NCAA DIII), where he accumulated 54 points (9G+45A) in 78 games – high offensive numbers for a defensemen.

His highest offensive season, however, came in his final junior season with the OJHL’s Hamilton Red Wings, where he scored 27 points (2G+25A) in 52 games.

To add on to his high-offensive numbers, Greco has proven to be a smart, position-ready skater, accumulating less than 40 PIMs/season in every year of his hockey career.

Head Coach Jesse Kallechy spoke highly of Greco’s ability as an all-around skater, especially in how he envisions his defense to supply the offense.

“Carl is a player who will bring a lot of skill and an offensive component to our defensive unit. He is an excellent puck-mover, which he was able to demonstrate at the end of last season during his short time in Fayetteville,” said Kallechy “We will highly encourage our defenseman to be a part of the offense this season, and we believe that Carl fits that mold perfectly. We can’t wait to see how his all-around game will develop from his first full season of pro hockey.”

For Greco, the atmosphere of the team was something that appealed him into his return so heavily.

“I’m really looking forward to getting down to Fayetteville, and playing my first full year of pro hockey. After conversations throughout the summer with Coach Kallechy it seems he is just as eager to bring a winning mindset to Fayetteville as I am, Being able to play several games after the college season last year I was made aware of the winning mentality that surrounds Fayetteville and the fans, and I’m looking forward to trying to bring a championship to the community.”

The Fayetteville Marksmen are excited to welcome back Carl Greco for the 2018-19 season, and look forward to him being the bedrock of what promises to be an exciting season of hockey in Cape Fear. The 2018-19 Marksmen Home Opener is October 19th against the Roanoke Rail Yard Dawgs, and Season Tickets are on sale NOW!