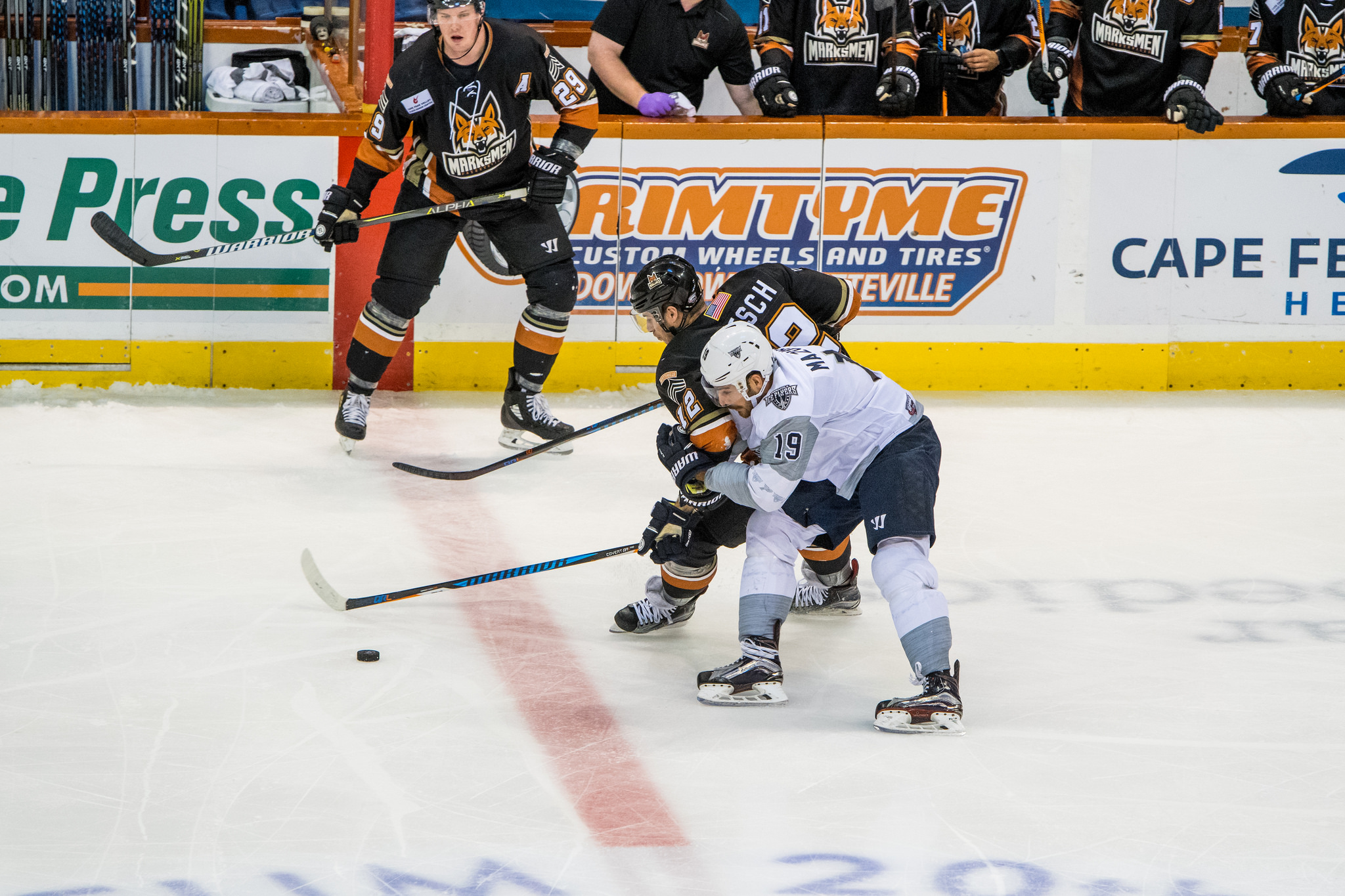 FAYETTEVILLE, N.C. – After a junior career that reads like a laundry list of some of hockey’s most prolific leagues, a hard-nosed, experienced, and talented Center comes to the Marksmen.

That player is former Pensacola Ice Flyer David Mazurek, who in his second year in professional hockey, finds himself in the orange and black in Fayetteville.

At 6’3, 193 lbs, Mazurek is noticeable on the ice, and for more than just his size, as Mazurek has shown off in high-profile leagues that he can be a scorer.

Drafted #31 overall by the Barrie Colts in the 2008 Ontario Hockey League Priority Selection Draft, Mazurek would spend a long-part of his junior career around the province.

Between these two teams, he also got his chance to play with the big club that drafted him, Barrie, in three games of the 2008 season, and for the entirety of the ’09-10 season, where in 44 games he recorded 9 points (3G+6A). In the 2011 season, the OHL’s Kingston Frontenacs would pick up Mazurek’s rights, and he would play the entire season, with 18 points (7G+11A) in 58 games.

He would finish off his Junior Career in the ’12-13 season with the British Columbia Hockey League’s Victoria Grizzlies, where he had the best season of his career with 34 points (13G+21A) in 48 games.

After this, he would go on to play for the University of Prince Edward Island (USports) for two seasons, after a year away from hockey, starting in the ’14-15 season, with 7 points (1G+6A) in 51 games.

Looking to continue his hockey career however he could, Mazurek would play two years in the New England Senior Hockey League, where he was a champion in the ’16-17 season, and awarded with the title of Most Assists in the ’17-18 season.

From there, he was picked up by the SPHL’s Pensacola Ice Flyers, where he came up with 15 points (6G+9A) in 27 games with the team.

Everything that has happened, lead to him being a highly-touted free agent this off-season, and after a long decision-making process, Mazurek chose the Marksmen.

“Moving forward, I am thrilled to be back once again in the SPHL. I learned what it takes to be a professional during last season in Pensacola. However, I now find myself in a Marksmen jersey, which I’m very excited about. After speaking with Coach Kallechy on multiple occasions during the summer months, I knew right away that Fayetteville was the right spot for me. Not only did Jesse sell me on the team and organization, but also the fact that we want to build the winning culture in Fayetteville – which is something I want to be part of,” said Mazurek “Looking ahead, I can not wait until October rolls around and we can begin with Training Camp. I’m excited for the opportunity that presents itself in Fayetteville.”

For Coach Kallechy, having Mazurek join a squad of players who were in his shoes last year is a major asset.

“We are ecstatic to get David signed for the 2018-2019 season. He is a player who was heavily recruited throughout the league, and we couldn’t be happier that he chose to come play in Fayetteville,” said Kallechy “He is a big body who skates extremely well. He is a player who understands what competing every night means, and he plays on the edge every time he steps onto the ice. I was so impressed with him each time we spoke on the phone, and I have no doubt that he will be a great leader for all of our young incoming players. We can’t wait to see what David will accomplish this season in a Marksmen jersey.”

With 56 days remaining until the SPHL season begins, the anticipation is starting to reach a fever pitch, especially as the Marksmen Camp roster starts to finalize.

The Fayetteville Marksmen are excited to welcome David Mazurek to his new home for the 2018-19 season, and look forward to him being the bedrock of what promises to be an exciting season of hockey in Cape Fear. The 2018-19 Marksmen Home Opener is October 19th against the Roanoke Rail Yard Dawgs, and Season Tickets are on sale NOW!