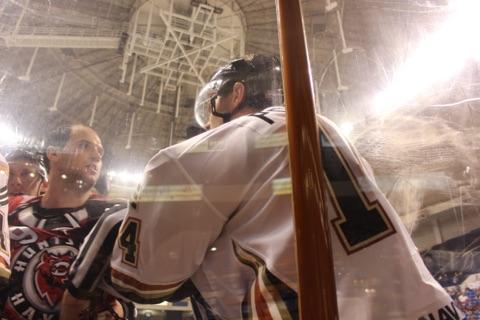 Fayetteville, N.C.-  For the second straight week, the Fayetteville Marksmen battled back from a 3-1 deficit, but were unable to complete the comeback, falling to the Huntsville Havoc, 6-3, at the Crown Coliseum on Friday night.

The Havoc dictated the pace of the contest out of the gate and were rewarded for their hard work early in the first. On a delayed penalty call against the Marksmen, the Havoc cycled the puck around the boards, eventually finding Alex Botten at the top of the right circle for a wrister. His shot ricocheted off Tyler Piacentini to make it 1-0.

Nearing the end of the first stanza, the Marksmen pulled back to within one goal. Working hard below the net, Ray Boudiette found Ludlow Harris sneaking down the leftwing side, and ripped home a one-timer from the circle, over the glove of Keegan Asmundson.

The second period opened with both teams trading penalties, but eventually opened up midway through, when Kyle Sharkey put the Havoc up 3-1. Skating around the zone, Sikalis took a loose puck from the point, powered it to Sharkey, whose wrister rifled past Zenzola.

Attempting to mount a comeback, the Marksmen pulled back to within one, courtesy of John Schiavo’s first of the season. Jake Hauswirth carried the puck into the zone, fed an off-balanced pass to the tape of Schiavo, who froze Asmundson before roofing the puck.

The third period began with both teams exchanging chances, but the Marksmen struck first to pull even, 3-3. Travis Jeke found Shane Bennett with a cross-ice feed at the top of the left circle, where Bennett snapped a laser past Asmundson.

That would be as close as the Marksmen would get. Midway through the third, Christian Powers found space from below the goal line and lifted a sharp-angle shot on net. The rebound caromed off the pad of Zenzola and to the tape of Nutkevitch, who spun in his second of the night.

Increasing their lead to 5-3, the Havoc presented a relentless forecheck while operating on a four-on-four situation. Botten dug the puck out of the corner, fed a cross-ice feed to the stick of Cody Smith, who located Jack Ceglarski for the backdoor feed into the open net.

With Zenzola on the bench, the Havoc put the game away with an empty netter, knocked in by Sharkey for his second of the night.