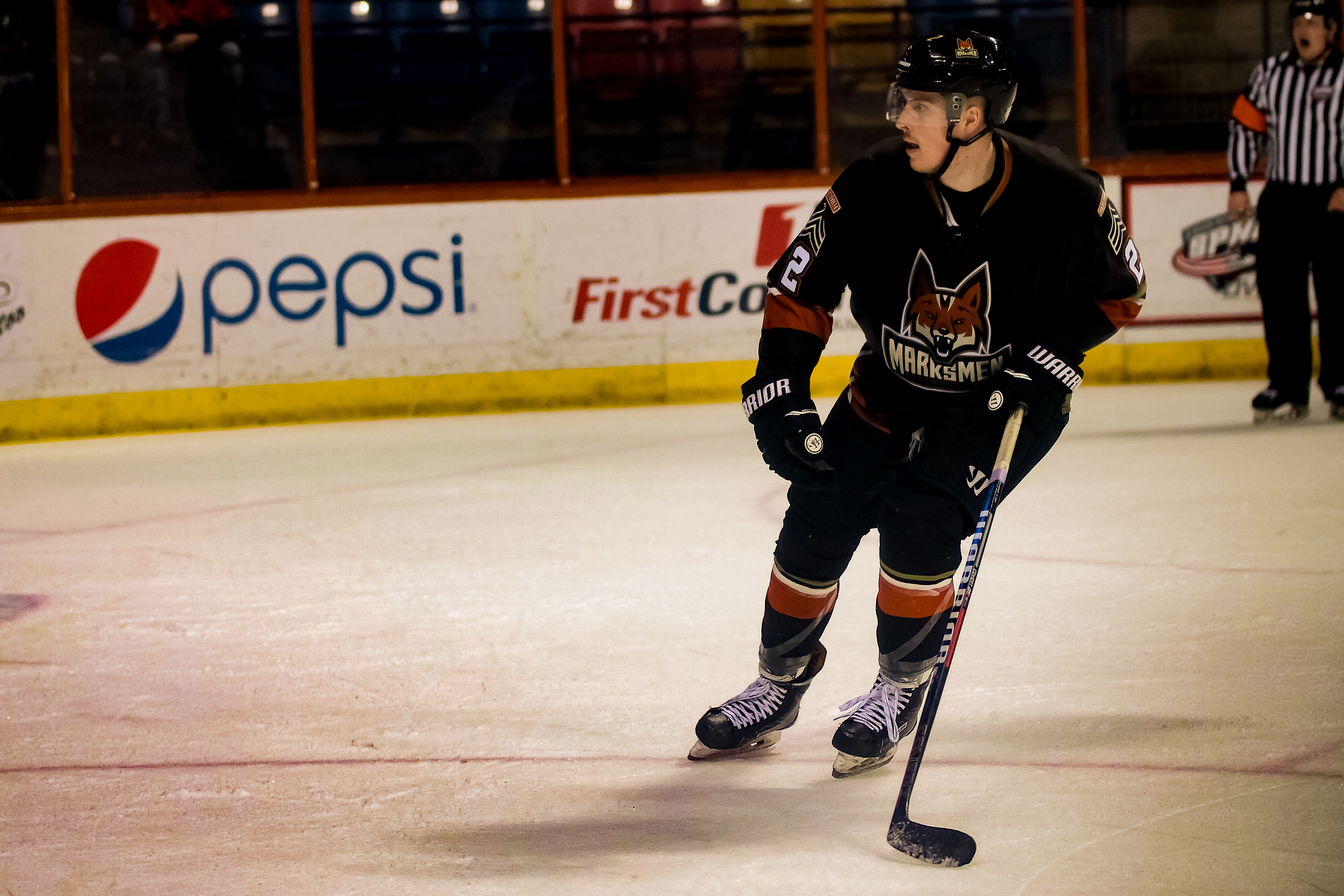 FAYETTEVILLE, N.C. – It was Marky’s birthday Friday night in the final regular season game of the season in the Crown. The Marksmen were looking to keep on their winning ways after taking four of the last five. Huntsville’s potent offense got the game started quick, they scored on only their third shot of the game. The goal gave the Havoc an early 1-0 lead, and they wouldn’t look back.

Fayetteville got outshot 13-1 in the first 8:54 of the opening period. The litany of shots didn’t go unnoticed for Huntsville as they scored another goal. The score extended their lead to 2-0 with just over 11 minutes remaining in the first period. The early scoring faded and the teams went back and forth, to no goals. The clock hit zero and the Marksmen went into the dressing room trailing by two scores.

The Marksmen came out of the intermission needing to score, the deficit kept growing and they needed to slow it down. Even with the obvious emphasis on offense, Fayetteville could only muster a single shot in the first eight minutes of the second period.

Once again, the lack in Marksmen offense led to Havoc offense. Huntsville scored again, extending their lead. With the score now at 3-0, Fayetteville needed something to go their way. Following the Huntsville goal, the Marksmen rattled off the next five shots, still failing to score.

With 7:23 to go in the second period, Huntsville took all the life out of the Marksmen. The Havoc scored yet another goal to extend their lead to four. The scoring didn’t stop there as only 31 seconds later, the Havoc struck again. The puck found the net yet again, giving Huntsville a 5-0 lead over the Marksmen.

Marky wasn’t getting any birthday presents on the ice as the scoreboard read 5-0. The scoring didn’t stop there; for the sixth time in the game, Huntsville scored. The lead now stood at six for the Havoc, not the way Fayetteville wanted to go out on Fan Appreciation Night. The Marksmen had their first brightspot of the game with four seconds remaining in the period. The newest Marksmen, Sam Wilbur found the net, his first goal with the Marksmen. The goal made the score 6-1 at the final break of the contest.

A blowout ensuing, the Marksmen could have laid down and get even more embarrassed. They showed how they can play through adversity, a real catalyst in their upcoming playoff run. After keeping Huntsville quiet for a few minutes, Fayetteville found the net again. Brian Bowen got his name on the goal sheet, scoring his 15th on the year. The Marksmen couldn’t celebrate much as they still trailed 6-2.

Special teams surprisingly didn’t play a huge role in this game. The only time the man advantages or disadvantages affected anything was in the third period. Following a Fayetteville penalty, Huntsville decided to layer it onto the Marksmen. They scored their seventh goal of the game on the power play, their lead now 7-2.

You’d think that a team up by five goals might calm down and play it safe; not the Havoc. After a series of penalties and the Marksmen being down a man, Huntsville scored their eighth and final goal of the game. Only 22 seconds remained when the Havoc scored. The final seconds ticked off the clock and the game was finally over.

The Marksmen lost 8-2, tied for their largest loss of the season. Friday’s game ends Fayetteville’s home schedule in the regular season. The loss keeps the Marksmen in fifth place, although they now trail Knoxville by three points for fifth. The Marksmen now travel to Roanoke to finish off the weekend against the Rail Yard Dawgs.

Bad Bounces Down Marksmen 5-3 in Roanoke Scroll to top