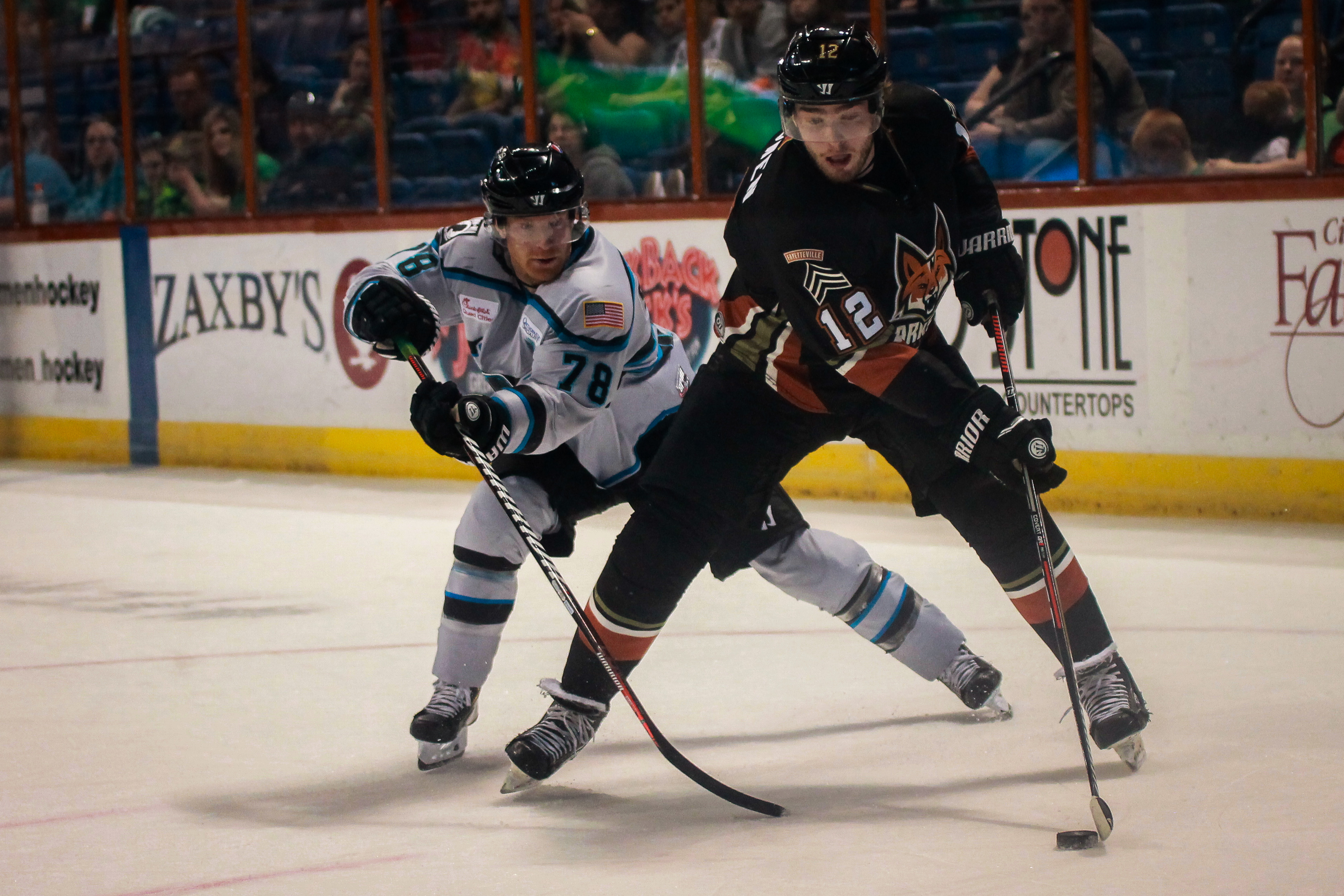 FAYETTEVILLE, N.C. – The marathon goal-fest that was Saturday lead the Marksmen into the rubber match of the series on Sunday. Fayetteville was looking to win the series and keep their all time win percentage against Quad City above .500. Following the combined 13 goals of Saturday night, both goaltenders – Di Salvo for the Storm, Kelley for the Marksmen – and defenses knew that they needed to step it up.

The beginning of the game looked good as goaltending went. The first 17 shots of the game got stopped by the men in the crease, a reprieve from the fourth shot scoring as it did yesterday. The multiple misses on many attempts finally showed on the scoreboard as the Marksmen found the net, 11 minutes into the opening period. David Mazurek scored for the second time in as many days, giving Fayetteville a 1-0 lead. A beautiful goal found in front and forced through short-side.

Both teams destroyed the goaltenders in the final 10 minutes of the period as they peppered the nets with shots. Both netminders held strong, as did the Marksmen lead. The horn sounded and the teams went to intermission, Fayetteville still holding a single-goal lead.

After the large output of shots in the opening period, the shots slowed down at the beginning of the second. Only one shot was put on net in the opening four minutes of the penultimate period of play. Three minutes into the period, Quad City got sent to the penalty box for the first time, Fayetteville’s league-leading power play got to work. After not recording a single shot during the advantage, with one second left on the penalty clock, the Marksmen scored. Darren McCormick scored an unassisted goal – exactly two minutes from the start of the penalty – as he was falling out of the air. The goal gave Fayetteville some insurance, but they still sat with the most dangerous lead in hockey at 2-0.

The second period was full of runs in the shots on goal department. Fayetteville had a run of four straight shots, followed by a Storm run of seven in a row. The run didn’t seem to matter to the Marksmen, as after the teams traded shots, they found the net again. The captain, Jake Hauswirth, sent a puck into the net, extending Fayetteville’s lead to three.

Typically, a three goal lead would be enough of a lead to win, but the Marksmen weren’t comfortable. With just over a minute remaining in the period, Fayetteville scored again. Cody Brown found the net wide open on the far side, extending the Marksmen lead to four. The final minute ticked away and the teams went into the dressing rooms for the final intermission.

Shooting slowed down in the third period, as both teams tied their game low in shots during the third period. A few penalties and a Tyler Palmer fight got wrinkled into an overall lackadaisical opening 16 minutes of the period. With the score still at 4-0, Quad City needed something positive to take back to Illinois with them, knowing their playoff chances were sunk. Former Marksmen Mike Casale gave it to them, scoring the only goal of the game for the Storm with 3:18 remaining in the final period.

Even with two men in the penalty box, Fayetteville put a little extra wind in their sails in the closing minutes. Darren McCormick scored his second goal of the game, giving the Marksmen a 5-1 lead. The lead stood through the final pair of minutes, with the whistle blowing on yet another Fayetteville win.

The win improves the Marksmen record to 24-18-8. The win also gave Fayetteville sole possession of fifth place in the standings. The Marksmen currently sit a single point out of fourth place, as Knoxville has 57 points to Fayetteville’s 56. The Marksmen go into a crucial weekend against third place Huntsville and seventh place Roanoke, as a pair of wins could put them a game out of third.

Our FINAL Home Game of the Season is THIS Friday, March 22 at 7 P.M. for FAN APPRECIATION NIGHT / Marky’s Birthday Bash! ALL tickets are $9, Tall Bud Light cans are $2, and the first 700 Kids (12-&-Under) receive a Marksmen Mini-Hockey Stick.

We’ll be wearing our first-ever true Alternate Jerseys, which’ll be auctioned off following the game. Finally, all of Marky’s mascot friends will be in attendance for intermission activities and meeting fans!

You won’t want to miss the biggest party of the season – get your tickets HERE.