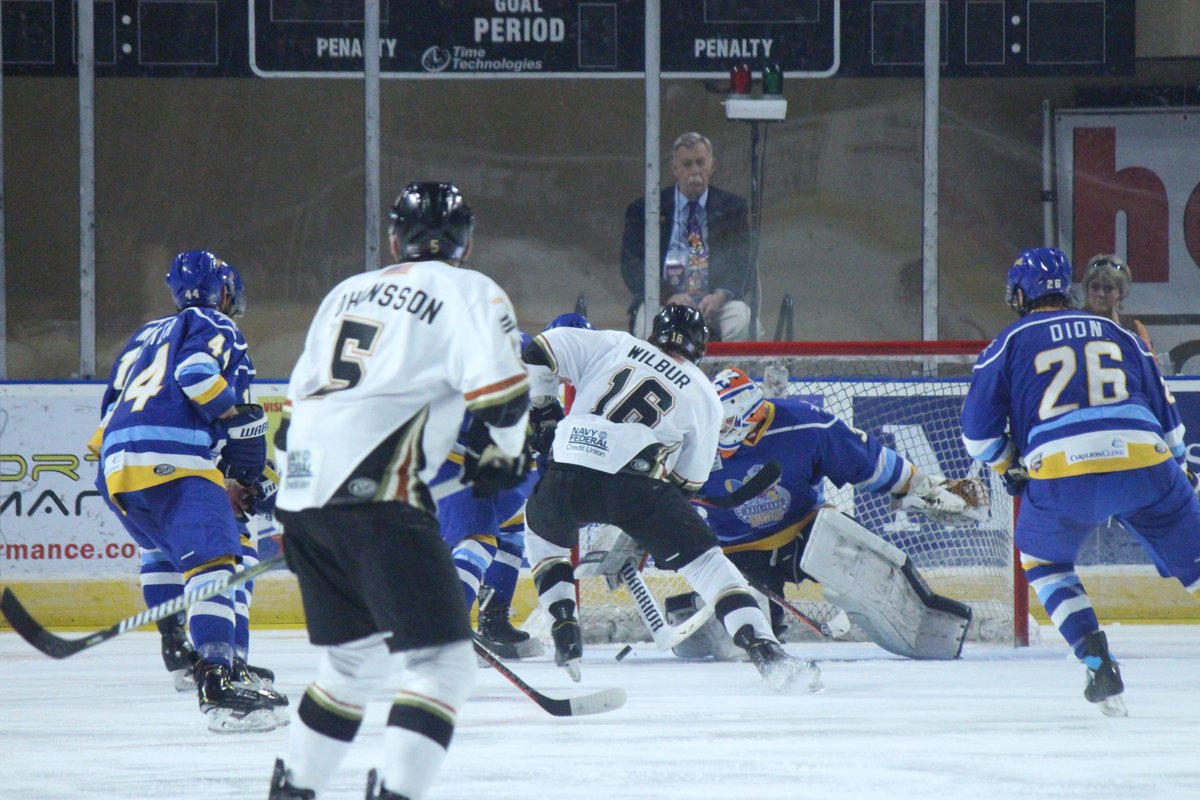 ROANOKE, Va – A disappointing loss to end the home schedule backed the Marksmen into Roanoke looking for a positive to take out of the weekend. Fayetteville was playing without head coach Jesse Kallechy and forward David Mazurek as they were both suspended following the previous night’s ejections. The Marksmen needed to play through the adversity and get a win, even while shorthanded.

The game started out well for Fayetteville as they pumped out the first four shots of the game. The offense was quickly halted and Roanoke took charge. The next seven shots of the game came off the sicks of Rail Yard Dawgs. One of those seven hurt the Marksmen even more as it found the back of the net. The goal gave Roanoke a 1-0 lead, with 11 minutes still remaining in the opening period.

A few penalties was all she wrote for the remainder of the first period as the clock hit zero. The teams fled into the dressing rooms with the score still standing at 1-0. The Marksmen needed something to go their way in the second, as the first wasn’t too friendly for them.

The second period started off quickly and quietly. Shots went back and forth, but neither team could finish the job and get the puck into the net. Just over eight minutes into the period, the Marksmen finally found the net. Max Cook sent one over to Cody Brown, and past the Roanoke goaltender, tying the game at one. Special teams failed to play a major role as both teams units failed to find the net with the man advantage. That theme showed strong in the second as four penalties were killed off without the advantage team scoring.

Following a couple penalties, Roanoke found the net again. They took back the lead that they held for the majority of the game. The lead only sat at a goal and the Marksmen knew they weren’t out of it yet. Just over two minutes after Roanoke took back the lead, Fayetteville evened it up. Cody Brown found the net again, once again tying the game. That score stood when the whistle blew on the second period, 2-2.

Going into the final period of play, the teams were almost exactly even. The score was tied at two, Roanoke outshot the Marksmen by just one, and the Rail Yard Dawgs had two more penalty minutes. The third period was where the statement needed to be made, and it was.

The third period started off quickly as the Marksmen got called for a penalty only two minutes into the game. The penalty ignited the Roanoke power play as they converted for the first time all day, scoring the go-ahead goal. The goal made the score 3-2 in favor of the Rail Yard Dawgs.

The horn barely faded out from the last goal as Roanoke was skating down the ice, putting yet another puck into the net. The goals were scored only 25 seconds apart, really changing the outlook on the game for the Marksmen.

Knowing that they needed something, the Marksmen got to attacking. They shot the puck six times to no avail. Pulling Dillon Kelley was a last chance effort, and it worked. Max Cook found the net for the second time in the game, shortening the deficit to just a single goal with 1:39 to go in the game.

Fayetteville pulled their goaltender yet again, but it didn’t work out as well. Roanoke got the puck and scored an empty net goal, effectively icing the game. The final second ticked off the clock on a disappointing weekend for the Marksmen as they lose 5-3 to the Rail Yard Dawgs.

The loss drops the Marksmen to 24-20-8, they stay in sole possession of fifth place as Macon lost to Pensacola last night. Knoxville also lost, meaning the Marksmen stay within three points of fourth place. Fayetteville has four games remaining in the regular season, all against teams above them in the standings. A few wins and the Marksmen won’t be of the choosing of the league’s best to play in the challenge round.

Details, Execution Crucial in Rematch with Birmingham Scroll to top