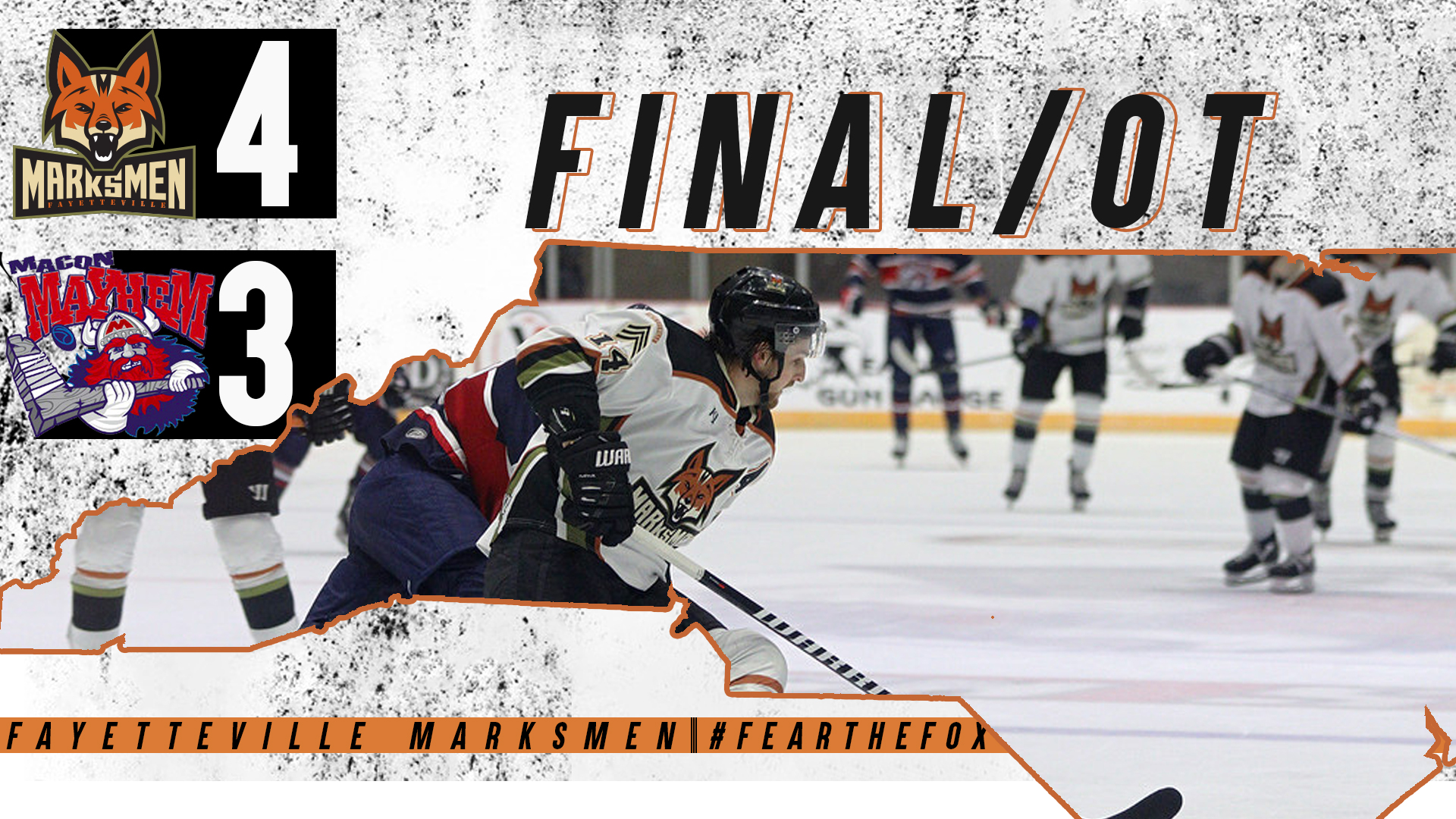 MACON, GA – A not-so-welcoming start to the new decade for the Fayetteville Marksmen would see the team come away with points in every game thus far, but yet to find a win. With their first full-weekend road trip of the new year ahead against the Macon Mayhem – a building they have not lost in this season – the Marksmen would look to turn their recent fortunes around.
On a Friday night in Middle Georgia, the Marksmen and Mayhem would start period number one in a relatively battle of unfamiliarity. While there would be opportunities for each team up the ice, they wouldn’t develop into anything too serious. Both teams would be sporting a new player in their first games of the season; John Gustafsson for the Marksmen, and Dylan Denomme for the Mayhem. Keep these players in mind. With 10:55 left to go in the period, Fayetteville’s new guy Gustafsson would account for the first goal of the game for either team, thanks to a solid feed in front from Tim Kielich. Things would appear to start well for the Marksmen, as they would soon be awarded a Power Play thanks to a high-stick from Marcus Ortiz. Despite the man-advantage, it would not be Fayetteville who would take advantage of the special teams play, as Denomme would find a puck to the back of the net on a rush with 4:58 to go in the first. An anticlimactic end after an exciting five minutes would see a knotted up first period end. Macon would lead in shots 8-7 heading to the intermission.
Second period action would be just that for both sides; plenty of excitement. It would start disastrously for the Marksmen, as they would find themselves behind thanks to an early goal by Marcus Ortiz (11) with 17:29 to go in the period. Despite the trailing, a good period of fighting and opportunities would work the Marksmen into a position to keep themselves closely in the game. It would work out for the Marksmen after a failed power play, as Shane Bednard would rush up the ice, deliver a perfect pass from the mid-slot, and feed John Gustafsson (2) for an absolute rocket shot to get his second of the night with 6:07 left. The Marksmen wouldn’t be done just yet, as minutes later Max Cook would force a power play after being tripped, and convert it himself with 2:58 left in the period from a play in front. Fayetteville would score two unanswered, and take a 3-2 lead into the third period, leading in shots 24-21.
The final period of play would ultimately be tame until the final stretch. After a lackadaisical first 15 minutes of back and forth banter, the Mayhem would suddenly find new life as Stepan Timofeyev would redirect a puck with his body with 5:03 left in the period to knot things up. From there, it would be a mad rush from both teams looking for the game-winning point. Both teams defenses would do enough to force, for the fourth-straight time for Fayetteville, overtime. The extra-time would hardly even be that; Shane Bednard would win the faceoff forward to Alec Marsh, Marsh would pass it back to Bednard on the near-wall in the neutral zone, he would squeak it back up to Marsh who’d enter a two-on-one rush with Olivieri, and on a sneaky backhand, Marsh would end the game just :14 into the extra period.
Fayetteville’s 4-3 OT win would be their first in 2020, and snap a five-game home winning streak for the Mayhem. This was Alec Marsh’s first game back with the Marksmen since his call-up, and he paid dividends quickly upon his return.
The Marksmen will spend the night here in Macon, returning to action against the Mayhem tomorrow night at 7:00 PM. Fayetteville will return the Crown Coliseum for consecutive weekends following the conclusion of Saturday night tilt.
January 10, 2020/by Fayetteville Marksmen
https://marksmenhockey.com/wp-content/uploads/2020/01/oyt.jpg 1080 1920 Fayetteville Marksmen https://marksmenhockey.com/wp-content/uploads/2022/05/Marksmen-286x300.png Fayetteville Marksmen2020-01-10 22:22:122020-01-11 21:35:06Fourth-Straight OT Battle Ends with Marsh’s Triumphant Return