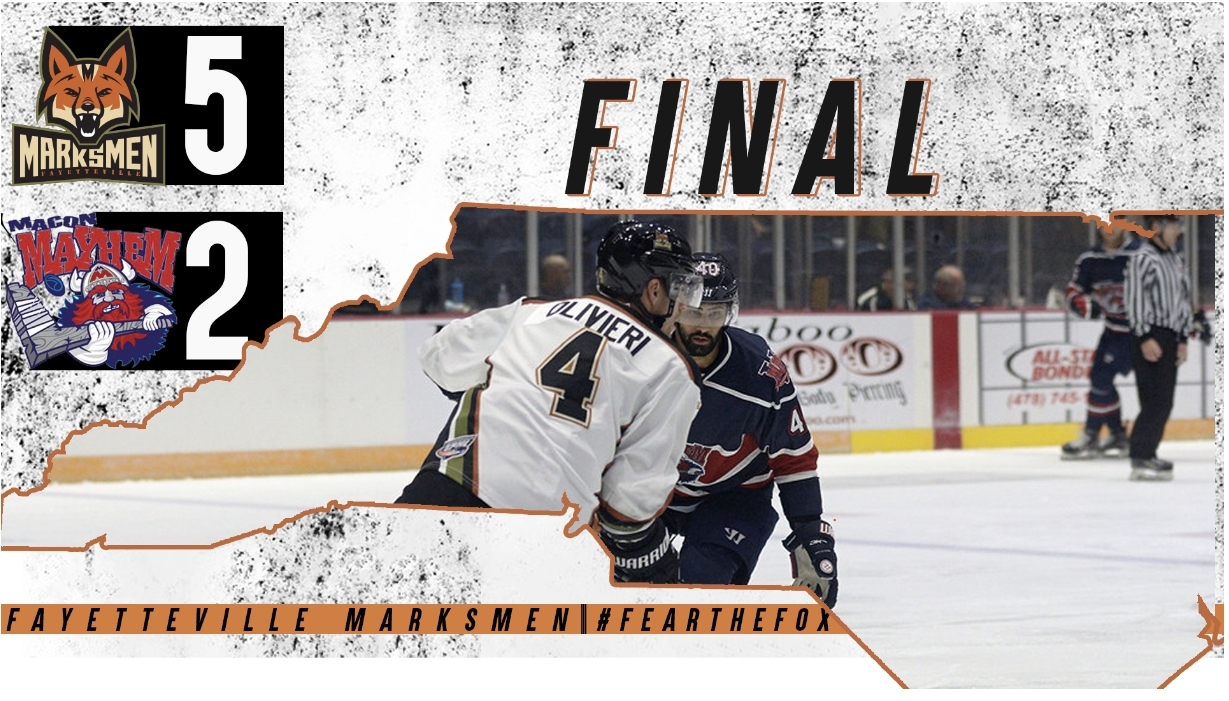 MACON, GA – Following the excitement of their fourth-straight overtime battle – and ensuing victory – Fayetteville looked to build off of their first win of 2020 the night before, battling the Mayhem back in Macon. The Marksmen would get a much-needed return from their bevy of call-ups in the first half of the season, as Beau McCue would re-sign with the team ahead of the Saturday night tilt.
Despite a slow-start first period for both sides, the opening twenty minutes would actually provide more than the admission price worth in entertainment. Near the halfway mark of the period, with little offense finding its way for either team, the Mayhem would strike first on the man-advantage as Stephen Pierog would get it through Gorsuch for a 1-0 lead. Minutes later, the scoring success would continue for the Mayhem, as Josh Koepplinger’s wraparound attempt would succeed and make it a pair lead with 5:31 to go. Fayetteville to this point would have just three shots; that would quickly turnaround. With the Marksmen back on the penalty kill, Taylor McCloy would start off an outstanding first period for himself with a breakaway shorthanded goal with 4:04 left in the frame. He wouldn’t be done yet. Now in four-on-four action, Shane Bednard and Taylor McCloy would find a defensive failure leading to a two-on-nobody breakaway where Bednard would feed McCloy for a one-time rocket to the twine. Fayetteville would finish the period with two unanswered goals and momentum heading the intermission, leading in shots 7-5.
Back-and-forth action would lead to a quick-moving and exciting period for the second, but it would be the goaltenders that would shine through more than the offenses in the second. Alec Marsh and Travis Jeke would be shooting like madmen attempting to break the scoreless second period. Despite their best efforts, Hayden Stewart would be able to stop them all. In fact, in spite of the fact the Marksmen spent nearly the entirety of the period in their offensive end, they would eventually score in the period after an excellent feed out of the zone to Brian Bowen for a breakaway, and he would backhand it past Stewart for his 16th of the season, and give Fayetteville its first lead of the night, 3-2, with 1:51 left in the second. Fayetteville would end the period on the Power Play, with :35 seconds remaining for the final frame. Shots favored the road team, 23-14.
In the third period, Fayetteville would finally start to flex its renowned scoring ability – and early. Not even 90 seconds into the final frame, Brian Bowen would get one past Stewart for his league-leading 17th goal of the season, and give the Marksmen the insurance goal they were certainly hoping for. A few minutes later, with the Marksmen more than capable of putting this one away, John Gustafsson would continue his stellar debut weekend with a top cheddar water bottle shot that sped back out of the net. The goal would give Fayetteville a 5-2 lead with 15:25 to go, and would serve as the final goal of the weekend. Fayetteville would take the weekend series 5-2, and earn their first sweep of 2020; now 4-0 at the Macon Centreplex. This was also Fayetteville’s first regulation win since December 27.
The Marksmen will head back to the All-American City, currently holding Second Place standings in the SPHL, and looking to continue their success of at least a point in every game of 2020, as they host the Mayhem on Friday Night for World Record Night, and the Knoxville Ice Bears on Saturday Night for Marvel Super Heroes Night joins forces with Cape Fear Valley NICU!
January 11, 2020/by Fayetteville Marksmen
https://marksmenhockey.com/wp-content/uploads/2020/01/d43df90ae94457f09b0ee03e4e7bea66.jpg 701 1229 Fayetteville Marksmen https://marksmenhockey.com/wp-content/uploads/2022/05/Marksmen-286x300.png Fayetteville Marksmen2020-01-11 21:35:392020-01-11 21:35:39Five-Unanswered Goals give Marksmen Weekend Sweep

Goaltender Blake Wojtala Called Up to Greenville Scroll to top