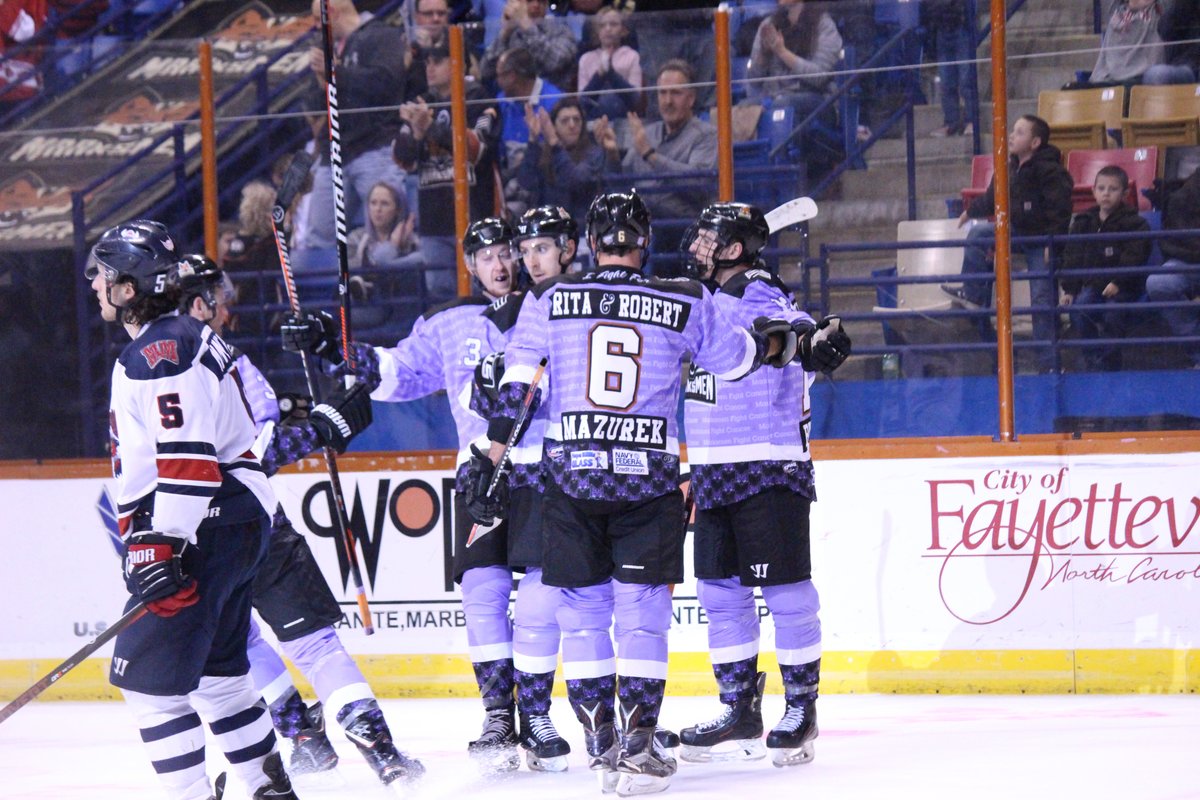 FAYETTEVILLE, N.C . – A powerful night at the Crown as the Marksmen and the community of Fayetteville stuck it to cancer on Friday, all while trying to stick it the the Mayhem. The Marksmen needed to get a win after a rough last few weekends. They needed to gain on the Mayhem in the standings, and had a perfect chance to do so on Friday night – for a good cause.

Unsurprisingly, the game started off slowly for both teams. A Macon penalty cut the period in half, but Fayetteville failed to convert with the advantage. Fayetteville controlled the puck in the offensive end, out-shooting the Mayhem by nine. The Marksmen got a penalty with the clock fading out, but Macon didn’t convert before the horn. Both teams went into the intermission scoreless, although Fayetteville seemed to have the momentum with shots already heavy in their favor.

Fayetteville had a 1:50 penalty kill going at the start of the second half, as the first period penalty was mostly served in the second. With under 20 seconds left in the penalty, Macon’s power play team found the net on Seth Ronsberg’s stick. After successfully killing off the first minute and a half of the penalty, Fayetteville couldn’t finish it out. The goal was the first of the game, giving Macon a 1-0 lead only 1:33 into the second period of play.

The Marksmen, used to playing from behind, knew what they needed to get back into the game. The game slowed back down as the teams went 10 minutes without a whistle blown for a penalty or a goal scored. Once the clock hit eight, the game heated up. After playing with a deficit for over 10 minutes, the Marksmen finally got it going. Forward Cody Brown found the back of the net with a tip of a Cory Melkert shot, tying the game up at one. The goal put the Marksmen right back in contention to win the game, but it wasn’t going to be easy.

Just over three minutes after Fayetteville’s equalizer goal, Macon turned up the heat towards the end of the second. The Mayhem scored on an odd-angle John Siemer shot, giving them a 2-1 lead with 4:19 left in the penultimate period. The Marksmen could only muster one shot on goal before the end of the period following Macon’s goal. Once again, the period ended with the Mayhem on the power play. The Marksmen were blown for the only penalty of the period with just over a minute remaining in the period. The teams got sent back to the dressing room, the Mayhem leading 2-1.

Macon started out the second period quick, the Marksmen needed to emulate that. Only 2:40 into the final period of play, the Marksmen got it going. Kyle Thacker scored, somehow, off a dump in from Center Ice that found its way off the boards and through the five-hole of Mayhem goaltender Ian Sylves. This oddity not only tied the game at two, but gave the Marksmen the momentum.

HIGHLIGHTS: We all know @kthacker93 (@PotsdamHockey) is a goal-scorer (obviously), but this goal from CENTER ICE is a bit ridiculous.

The tide of battle can turn (or bounce) on a moment's notice. Thacker's second started our comeback, and we wouldn't LOOK back. #FearTheFox🦊 pic.twitter.com/rB2gaw1nvk

The Marksmen put themselves in control of the game, with over 17 minutes still to play. A very slow opening nine minutes of the first period had only one shot outside of the goal for either team. The Marksmen got sent to the penalty box yet again, with the penalty killers having more success, finishing the night 2/3.

With a now-power play ticking down for the Marksmen just moments later, they found the back of the net again. Brandon McMartin, in his first game with the Marksmen, would immediately make an impact for the team with a strong blue line shot thay found its way. The power play goal gave Fayetteville a 3-2 lead with 7:23 left in the final period of the game.

The Marksmen didn’t let the single goal lead stay for long, as they kept it going only two minutes later. David Mazurek snuck it past the Macon goaltender off his skate from a Cody Brown shot, giving the Marksmen a two goal lead at 4-2. A two goal lead is always said to be the most dangerous lead in hockey, but the Marksmen wouldn’t give into danger. A couple of fights – including Mazurek just seconds later to give him the Gordie Howe Hat Trick on the night – and a Macon minor penalty put the Marksmen on the power play yet again, and they made the Mayhem pay.

Cory Melkert from the right circle would deliver a great shot, that Jake Hauswirth would tip through and score for Fayetteville’s second power play goal of the game. The Marksmen finished the contest 2/3 on the power play, as the goal gave the Marksmen a 5-2 lead, effectively putting the final nail in the coffin for Macon.

Fayetteville closed it out and won 5-2 on Friday; their first win in five games and second of the season over Macon. The win puts them only three points out of fifth place, still tied with Roanoke for sixth. The Marksmen host the Mayhem for one more key game leading up to the postseason.

We’re back home on March 9 for HOCKEY FIGHTS CANCER weekend. With proceeds from the weekend going to benefit St. Jude Children’s Hospital and the American Cancer Society, this will be an emotionally-charged weekend you won’t want to miss.

Join us following tonight’s game for a Post-Game Skate with the Marksmen for just $5 – including Skate Rental.

We’ll be back for a Three-Game Weekend on March 15-17, with Team Poster Night, Princess Party/Superhero/Military Appreciation Night, and Sunday Funday (St. Patrick’s Day Edition) all coming up. You won’t want to miss it – get your tickets HERE.