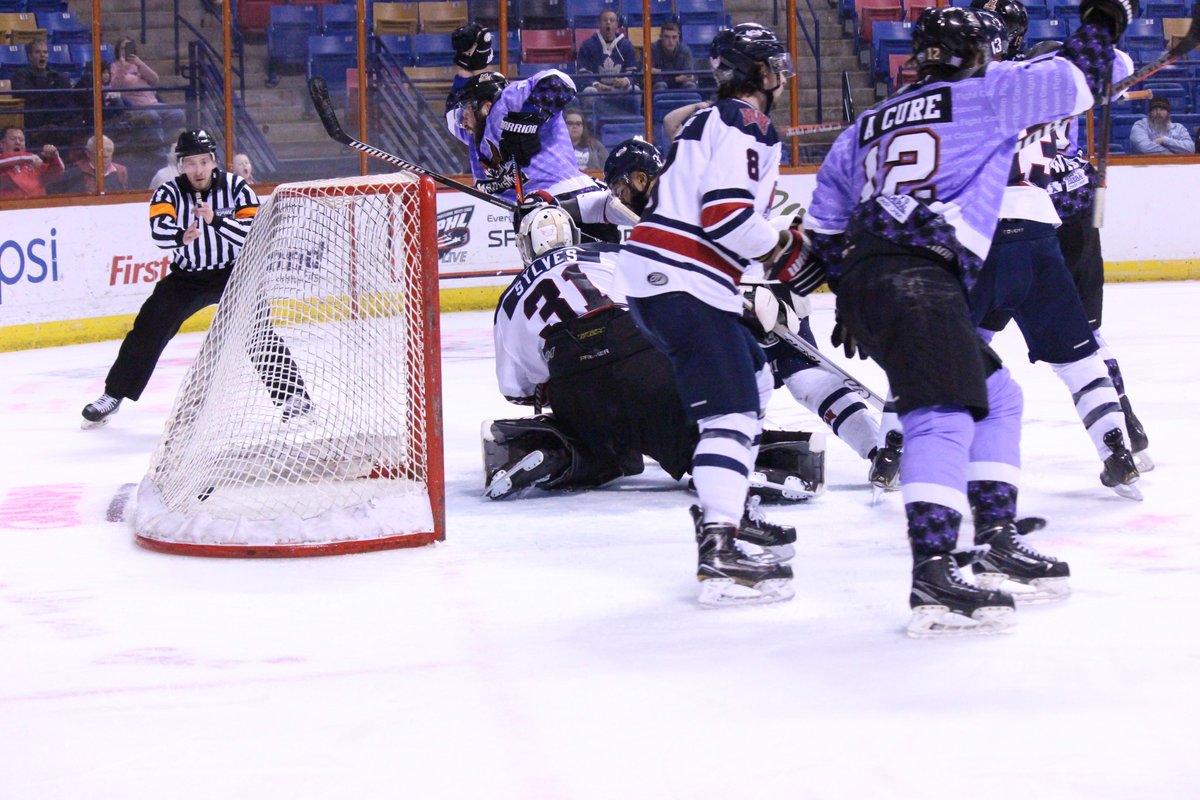 FAYETTEVILLE, N.C. – A weekend sweep and a point out of fifth place on the line as the Marksmen closed out the weekend against the Mayhem. Fayetteville, again wearing their purple Marksmen Fight Cancer sweaters, struggled in the opening few minutes. The Marksmen got outshot five to three in the first five minutes of play.

With the multitude of shots coming from Macon shooters, something had to happen. Contrary to yesterday’s game, the scoring got started quick. Only 4:24 into the opening period, Macon’s John Siemer put it past Nathan Perry. The goal was the first goal scored in the first period by either team since both scored in the opening period of last Saturday’s game. The Mayhem had an early lead, and momentum on their side.

The Marksmen quickly got back even in the shots on goal category. Fayetteville had five of the next six shots on goal, putting them ahead of Macon in shots. With the large number of shots, the Marksmen benefited.

Just over seven minutes after the opening goal of the game, Fayetteville sent the equalizer into the net. For the second straight night in a row, Cody Brown found the back of the net. His ninth of the season, tying the game at a goal a piece. With eight minutes still to go in the period, both teams wanted to make a statement and go into intermission with the lead.

Once again, penalties killed the Mayhem. Macon was whistled for their second penalty of the game with four minutes remaining in the first period. After successfully killing off the first Fayetteville power play, they thought they knew what to do; the Marksmen thought differently.

Following a shot in the opening seconds of the power play, the Marksmen power play team went limp. No shots for over a minute for Fayetteville with the advantage. The tides turned and they favored the home team. Fayetteville, on only their third shot of the power play, scored their second goal of the game. David Mazurek, another Marksmen who scored last night, found the net to give Fayetteville a 2-1 lead. This would end up to be the game-winner.

That goal held strong, with both teams going into the dressing rooms with the Marksmen having a one-goal advantage. The second period started off how many periods go for the Marksmen – slow. The Mayhem only recorded a single shot in the first 11 minutes of the period. Although Macon was struggling, the Marksmen were doing the opposite.

Fayetteville kept the puck in the attack zone for most of the period, and they reaped the benefits of being in a scoring zone. Nine minutes into the period, the Marksmen started to separate from the pack. Taylor McCloy scored, him being the only Marksmen to score today that didn’t score yesterday. The goal extended Fayetteville’s lead to two, with the score being 3-1.

Killing off almost a full minute of five on three hockey, the Marksmen found the net. A shorthanded goal, once again lead by Taylor McCloy for Fayetteville, giving them a 4-1 lead. The game wasn’t over yet, as there was still 28 minutes of hockey to play. A bunch of shots, but no goals closed out the period. The Marksmen went to the dressing room with a sweep in sight, and they didn’t let it slip away.

The penalty-killers got working early in the final period of play, with a penalty being called in the first minute of the period. The killers were successful once again, their third successful kill in three chances. The Mayhem did all they could to gain ground in the opening minutes of the third period, outshooting the Marksmen 11-0 in the first nine minutes of the period. The Fayetteville defense decided to come out of intermission and finally play at that point. The Marksmen then went on to outshoot Macon 10-0 in the final 11 minutes. A lowly Mayhem penalty was the only real event for them in the second half of the third period.

For the second night in a row, the Marksmen successfully closed out the game. They win 4-1, sweeping Macon on Hockey Fights Cancer weekend. The wins were much needed as the Marksmen were sliding ever farther down the SPHL standings. The win puts Fayetteville at 22-17-8, only a single point out of fifth place.

The Marksmen look to extend their win streak next weekend with a trio of games at the Crown against the ninth-place Quad City Storm. This is the first visit to the Crown in the history of the Storm. The Marksmen are on the verge of clinching their spot in the playoffs and can do so next week against the Storm.

We’re back for a Three-Game Weekend on March 15-17, with Team Poster Night, Princess Party/Superhero/Military Appreciation Night, and Sunday Funday (St. Patrick’s Day Edition) all coming up. You won’t want to miss it – get your tickets HERE.

Join The Marksmen for Team Poster Night! Scroll to top