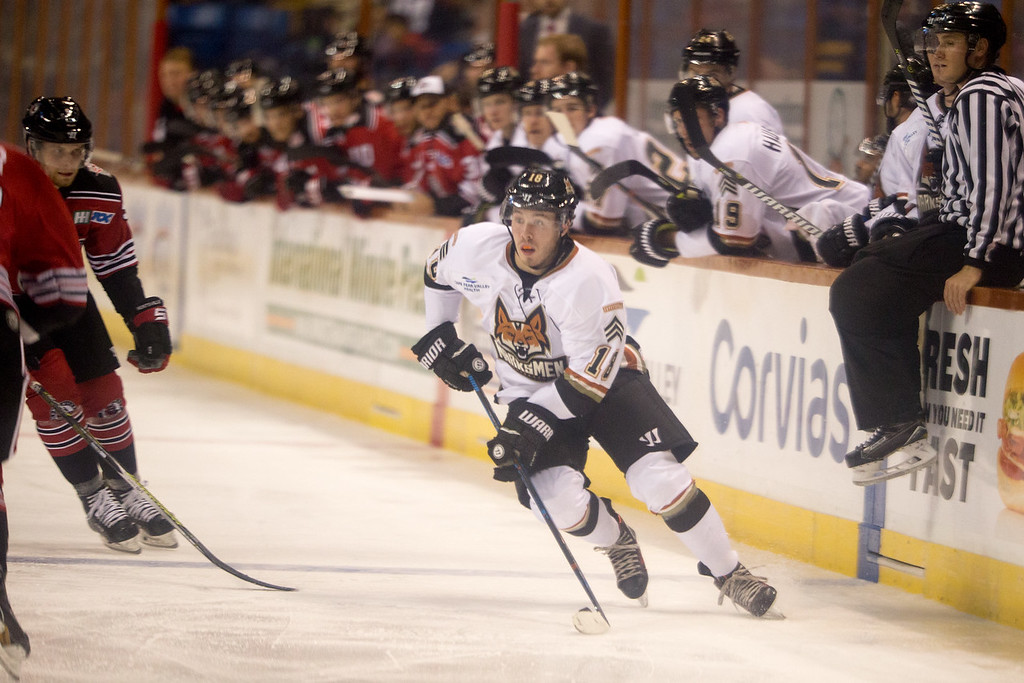 FAYETTEVILLE, N.C. – Opening Night 2017 was the first game of professional hockey for both the Fayetteville Marksmen, and Shane Bennett. Bennett, a rookie forward at the time, was wearing the orange and black, and ready to start his career in the eastern-most city of the SPHL.

He would finish the season on the opposite side of the league map, as he would finish his rookie season with the Mississippi Riverkings.

Now, heading into his second season, he once again starts off opening night wearing the same jersey he started his career in.

Shane Bennett will return to the Marksmen as a relatively-familiar face for fans of the team; suiting up in 16 games last season for our club, he accumulated 11 points (3G+8A), and was a +4. At the end of his 2017-18 campaign, he finished just short of 40 points, as he would finish the season with 38 (17G+21A), and a total of 48 games played, including three playoff games.

For Bennett, finding his way back to Fayetteville is something he’s long-anticipated.

“I’m very excited to be rejoining the Marksmen this season! Fayetteville will always be ‘home’ for me since I started my professional career here. The fans especially are very supportive and extremely loyal, and make Fayetteville really feel like home,” said Bennett

“Coming back to Fayetteville has been an exciting aspect to me because of them, but especially since I’ll be playing with many familiar, talented guys. Growing up playing with [Darren] McCormick, and continuing to play at the college level together, we have a great chemistry out there. As well, [Taylor] Pryce and I developed a good feel for each other on the ice in Mississippi, and I can’t wait to bring it to Fayetteville for our fans. No doubt, this will be a great year, and I’m looking forward to being back!”

First-year Head Coach Jesse Kallechy was able to see Bennett play plenty last season with both the Marksmen and the Riverkings, and knew he was a player that he wanted to pursue for this season,

“We are happy to bring Shane back to Fayetteville for training camp in October. Shane is an extremely gifted offensive talent who has shown he can produce at our level,” said Kallechy “We are looking forward to working with Shane on rounding out his game away from the puck. We are excited to see him come to camp and compete with all our players for a roster in October.”

Bennett’s contributions for the Marksmen have already begun this season. Earlier this off-season, he had reached out to former Riverkings teammate Taylor Pryce about his plans heading into the next season, passed Pryce’s info on to Coach Kallechy, and eventually helped Pryce find his way into the Marksmen jersey this year.

Bennett is a native of Grand Island, New York who spent a single season at SUNY-Cortland (NCAA DIII) before joining the ranks of professional hockey. An OJHL alumni with the Buffalo Jr. Sabres and Milton Icehawks, he lit up the scoreboard with 258 points (126G+132A) in 211 games played, before doing video game numbers in his single-season in the GMHL, with 124 points (68G+56A) in 45 games played.

The Fayetteville Marksmen are excited to welcome back Shane Bennett home for the 2018-19 season, and look forward to him being the bedrock of what promises to be an exciting season of hockey in Cape Fear. The 2018-19 Marksmen Home Opener is October 19th against the Roanoke Rail Yard Dawgs, and Season Tickets are on sale NOW!

Sheeran – Street Hockey to the South