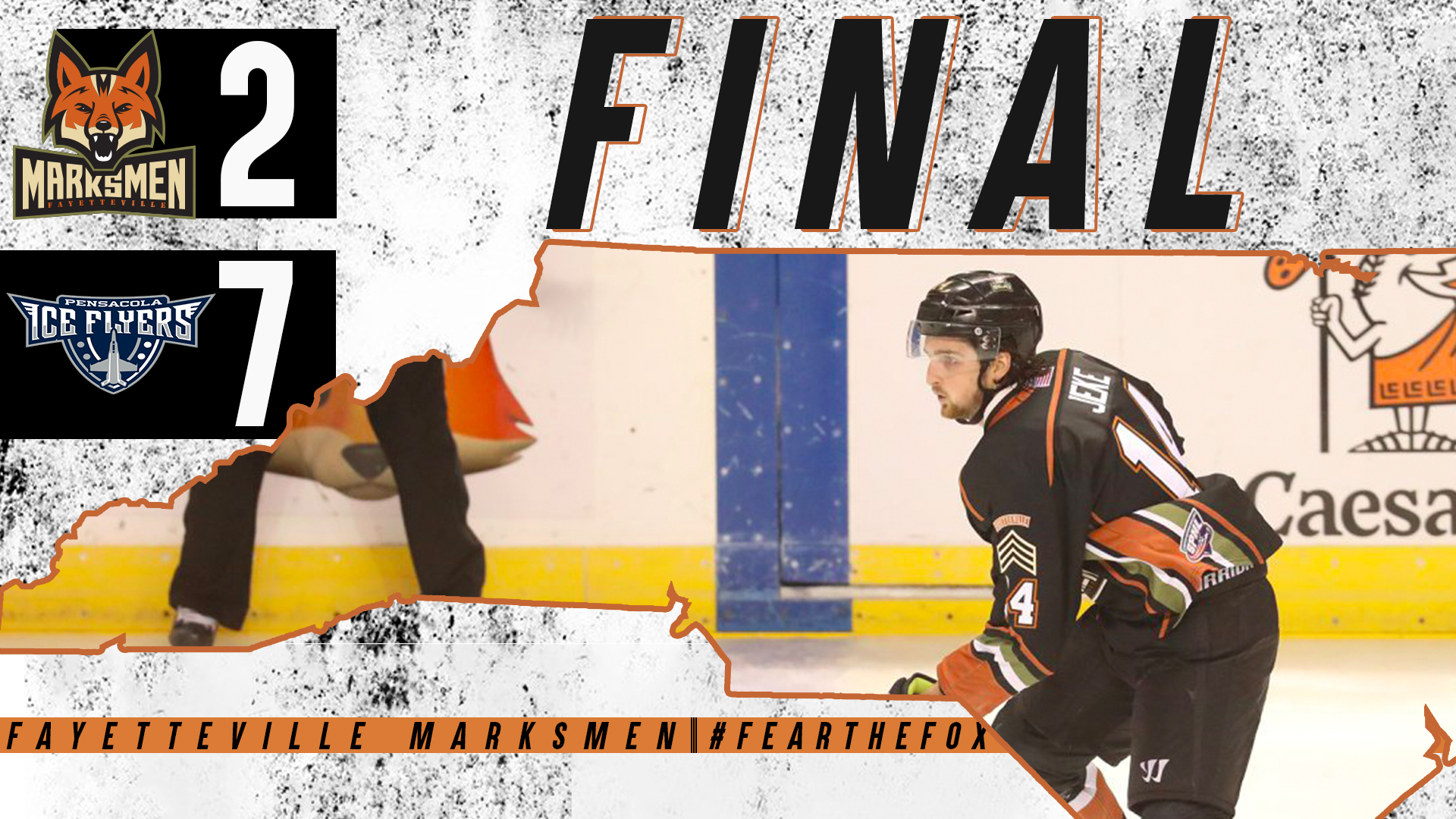 PENSACOLA, FL – A strong road win would kickoff the Gulf Coast weekend for the Fayetteville Marksmen, downing the Pensacola Ice Flyers 5-2 last night to pick up their 30th win of the season. Heading into a Saturday night with a chance to win the three-game series, the Marksmen would look to start this game the way they finished the previous bout.
Unfortunately for the Marksmen, the Ice Flyers would have short-term memory, forgetting last night’s performance and playing like the Pensacola team that swept Peoria. While it’d be knotted up in a scoreless affair through the first 12 minutes of the game, the goal-scoring gate would open up from the 13 minute mark on – four goals in 6:52, with two from Brett D’Andrea, one from Nathan Campbell, and one from Brennan Blaszczak. The Marksmen would have a temporary stop-gap from a Brian Bowen wraparound goal for his 28th of the season with :56.7 left in the first. The Marksmen would trail 4-1 after 20 minutes of play, being outshout 17-8.
The second period wouldn’t have much more positive news for the Marksmen, as the Ice Flyers would put two more goals on the board within 1:11 of each other at the 6:43 and 7:54 marks of the frame. The silver-lining for the Marksmen would come from their special teams, as the Penalty Kill would go 2/2, and the Power Play would put the second goal of the night on the board for Fayetteville as Drake Glover would tip a Taylor McCloy shot to make it a 6-2 game heading to the final period.
In an overall uneventful third period, the Pensacola Ice Flyers would put one more goal on the board late from Connor Powell’s second of the night and of the season. Pensacola would finish in a shots advantage 47-26, and take a 7-2 victory. Fayetteville returns to action against the Ice Flyers, looking to win the series tomorrow evening at 5:05 EST / 4:05 CST.
March 7, 2020/by Fayetteville Marksmen
https://marksmenhockey.com/wp-content/uploads/2020/03/touchdow2n.jpg 1080 1920 Fayetteville Marksmen https://marksmenhockey.com/wp-content/uploads/2022/05/Marksmen-286x300.png Fayetteville Marksmen2020-03-07 22:47:072020-03-07 22:50:44Fayetteville Drops First of the Season to Pensacola

Wojtala’s 41 Save Night Knocks Wind out of Pensacola Sails