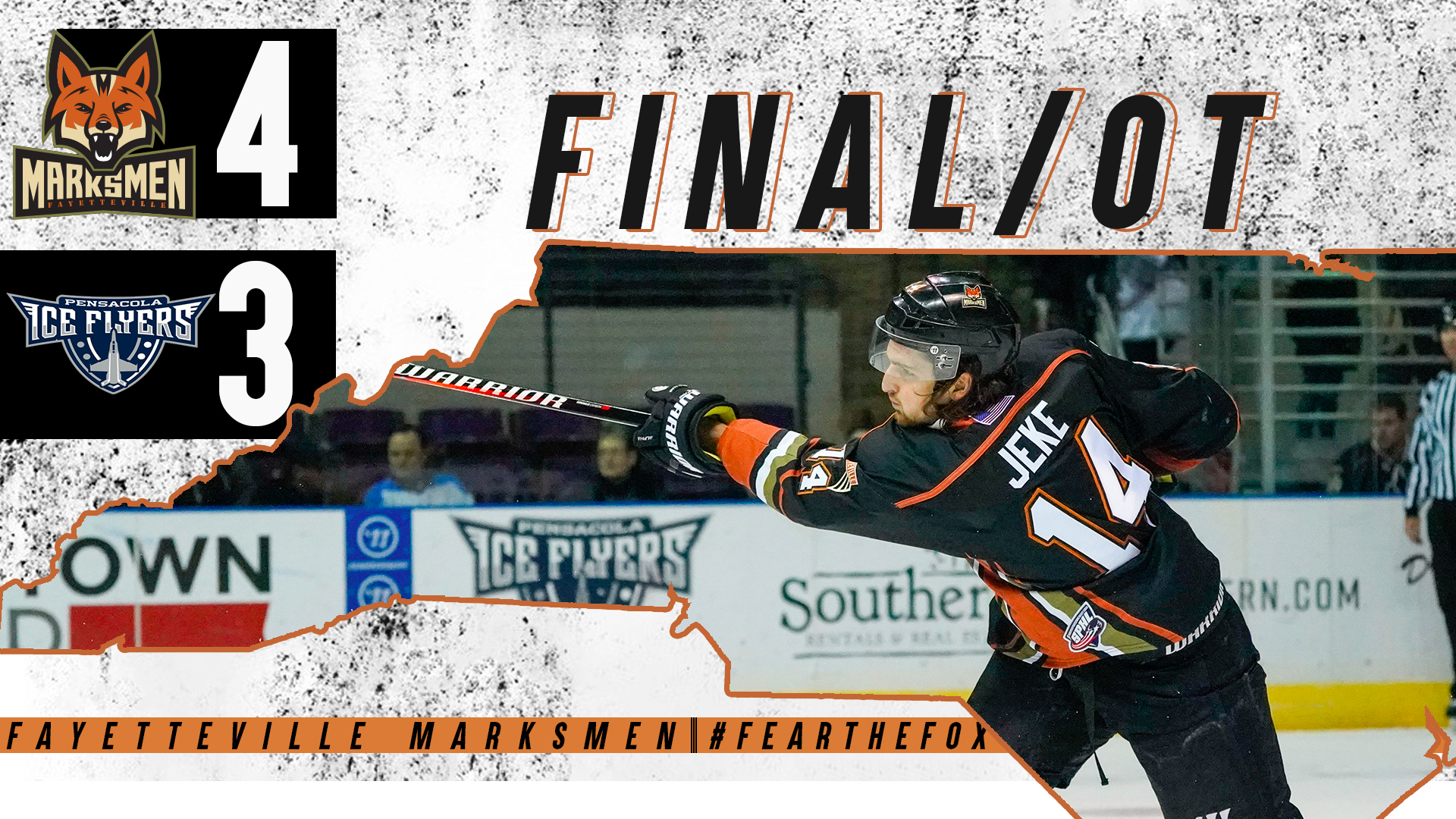 PENSACOLA, FL – A forgettable Saturday night in the Gulf Coast would see the Marksmen pick up their worst loss of the season, and their first to the Ice Flyers. Luckily for Fayetteville, time would be on their side in now allowing them to have the loss stew in their thoughts for too long, as they returned to action for an evening affair in the Panhandle, looking to leave Florida with four of a possible six points.
The Marksmen would re-calibrate to their standard style of play in the first period of the matinee affair, as both teams would finish the period with the same score the game started with. Fayetteville would get a power play opportunity that would go unfulfilled, but would even shots back up. While a back-and-forth period would result on the ice, and the offenses of both teams would provide shots, it’d be the goaltenders who’d shine, with 18 saves for Wojtala and 13 for Klein. At the end of the period, Nick Le Sage would be pinned for a two-minute unsportsmanlike conduct minor, and would start the second period serving that.
The scoring bug would awaken in the second period, as the clock would seem to turn back to yesterday’s game as the Ice Flyers would sink two Power Play goals past the Marksmen net-minder from Bucci and Powell, just 4:39 into the period. The Marksmen would persist through the storm, as Derian Hamilton would take a trio of hits behind the Ice Flyers net, feed Stathis Soumelidis, and he’d pang one of the goal post in. Soumelidis’ seventh of the season would make it a one-goal game with 11:30 to go in the second. With another penalty kill due up, the Marksmen would finally exercise their PK demon from the day, and it would lead to momentum on the other end as Brian Bowen would get a juicy rebound from a Shane Bednard shot for his 29th of the season, and knotted it up with 1:45 to go. Shots after 40 would go in favor of the Ice Flyers, 33-20.
Period three would see the Marksmen offer up a goal not even ten seconds into the frame, as Miers Moore would strike for his eighth of the year. Fayetteville would remain tenacious through the third, eventually finding themselves to a 1:50 five-on-three advantage. On the two-man Power Play, John Gustafsson would secure HIS eighth of the season, and knot the game up with 10:05 to go in the period. With Power Play chances and scoring opportunities for either team, the goaltenders would once again prevail, as the series finale would require Overtime.
In the overtime period the Ice Flyers would control the puck for the first two minutes, getting solid opportunities together that the Marksmen would have to thwart. In an INTENSE puck possession battle between Ryan Marcuz and Travis Jeke in the Marksmen Defensive End, Marcuz would be called for holding, and the Marksmen would go on a four-on-three Power Play with 2:40 left in the game. :33 into the man advantage, the Brian Bowen cannon would blow yet another rocket past Klein for Bo’s 30th of the year, and the game-winner.
Fayetteville would take four of the six possible points out of a tough road environment in Pensacola, and lock themselves back into first place with the Peoria Rivermen, heading to a three-game series against each other this coming weekend at the Crown Coliseum – likely to be the difference-maker in the battle for first place in the Southern Professional Hockey League.
March 8, 2020/by Fayetteville Marksmen
https://marksmenhockey.com/wp-content/uploads/2020/03/AfterPeriodWorkingFINALMARCH9th.jpg 1080 1920 Fayetteville Marksmen https://marksmenhockey.com/wp-content/uploads/2022/05/Marksmen-286x300.png Fayetteville Marksmen2020-03-08 20:03:032020-03-08 20:03:46Comeback Effort Succeeds with Bowen’s 30th in OT

Fayetteville Drops First of the Season to Pensacola