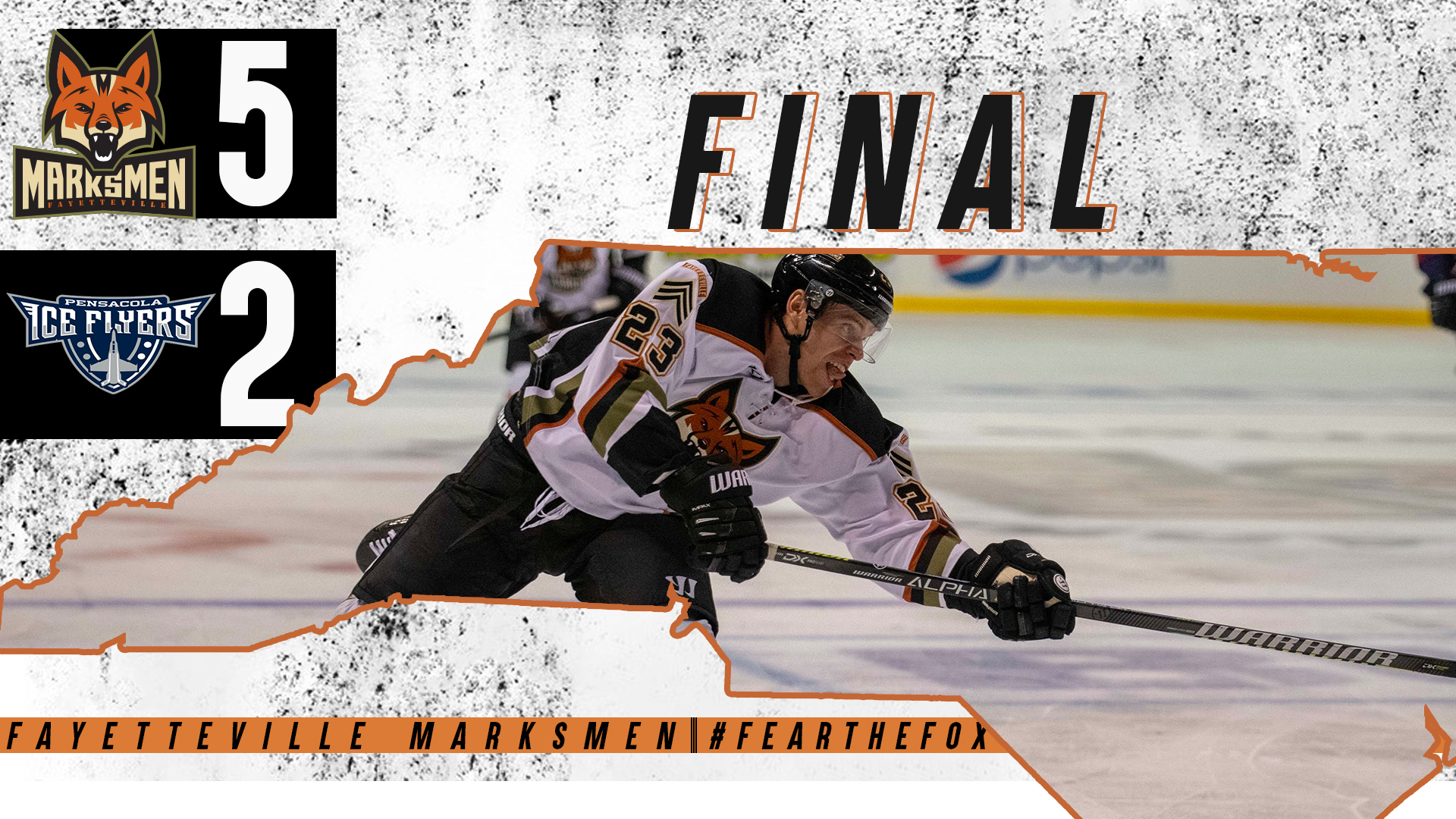 PENSACOLA, FL – Friday night would see the start of game action in the first-and-only trip to Pensacola Beach in the 2019-2020 Season for the Marksmen. Hot off a sweep of the then-#1 Peoria Rivermen last weekend, the Ice Flyers would have plenty of momentum and energy coming back onto their home ice, taking on the now #1 Fayetteville Marksmen.
Pensacola would showcase what makes them such a tough team to beat at home early – their tough defensive pressure. As a result of the defensive pressure, the offense would get a chance to go to work, peppering Marksmen goaltender Blake Wojtala with 20 shots after 20 minutes of play. Despite an early Power Play opportunity, the Marksmen would not be able to get much going. After 17:34 of play, the Marksmen would find their best opportunity of the night in an unlikely way, as Taylor McCloy would find twine for his 17th goal of the season, and give the team the lead late. The lead wouldn’t last quite to the intermission, as a Nick Le Sage crosschecking penalty would give the Ice Flyers a Power Play and an eventual goal of the faceoff from Meirs Moore with :24.2 left in the period. The period would end with a 1-1 game, and a 20-7 shots advantage for the Ice Flyers.
The script would flip in the second period, as the Marksmen would come out early with guns a-blazing. After suffering a 20 shot first period, Fayetteville would make the most of their chances, and dominate offensive time-of-possession. With the puck on his stick, John Gustafsson would net his seventh of the season to give the Marksmen back the lead with only 3:13 off the clock. A Power Play would not result in a Marksmen goal, but it was a much-needed improvement in every category for the special teams. Minutes later, Fayetteville would find their way to their third goal of the night, as Brian Bowen would feed Derian Hamilton for an outstanding shot and his second goal of the season. The period would end with a Marksmen penalty kill, and a two-goal lead heading to the intermission. The Marksmen would lead 3-1, despite being outshot in the period 13-8.
In the third period, the Marksmen would continue what worked for them in the previous frame: continued focus on the offensive pressure. The Marksmen would feel comfortable through the direction of the period, playing a Pensacola team not designed to comeback from big deficits, and their success would continue with the first professional goal for Drake Glover with 11:40 left in the game, to make it a 4-1 game at the time. A Brennan Blaszczak goal would bring Pensacola back within two, but Shane Bednard would put the game on ice with an empty-net rush down the ice for his eighth of the year.
Behind a 41 save night from Blake Wojtala, the Marksmen would take a quality road win from the Pensacola Ice Flyer, and achieve the ninth 30 win season in franchise history for Fayetteville. The Marksmen will go for the series win tomorrow night at 7:05 CST.
–
BE SOCIAL

Sweet, Sweet Victory for the Marksmen on Spongebob Night

Fayetteville Drops First of the Season to Pensacola Scroll to top