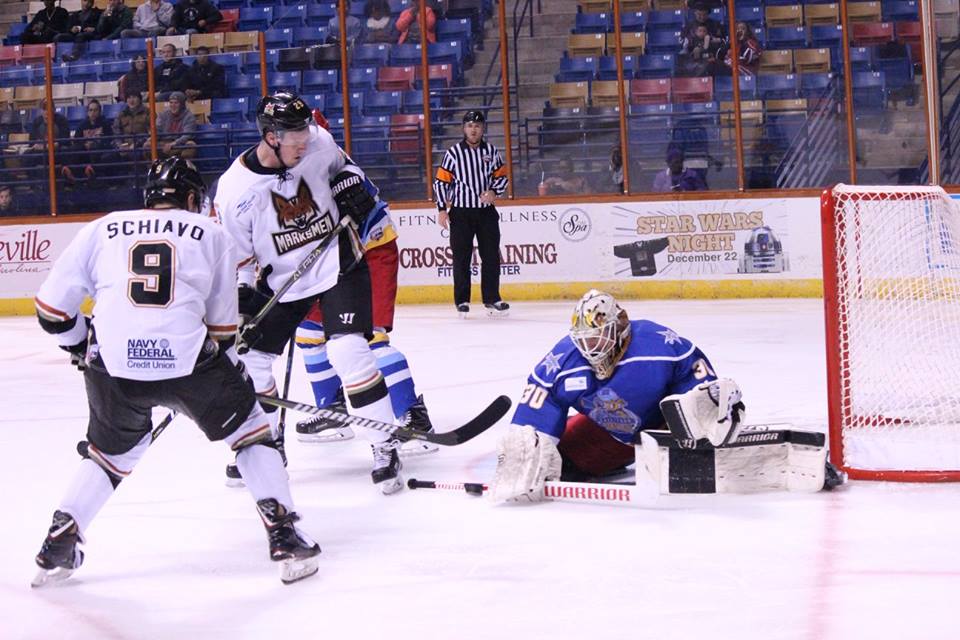 It didn’t take long for the tone of the evening to be set. Off the opening faceoff, Kyle McNeil dropped the gloves with Mitchell Mueller. After they were escorted to their respective penalty boxes, Brad Drobot and Travis Armstrong squared off on the ensuing faceoff.

The Rail Yard Dawgs carried the play for the first portion of the contest, but Patterson settled in, stopping every shot he faced. The Marksmen began to push the pace in their favor, and late in the first frame, they found the back of the net to take a 1-0 lead. With the puck bouncing around the zone, Chris Porter poked the puck away from a defender, and towards the slot. McNeil drove in from the high-slot area and rocketed a shot past Ryan de Melo.

Taking advantage of poor puck play at the blueline of their own zone, the Marksmen extended their lead to 2-0. John Schiavo took the puck away from Mathias Tellstrom at the blueline, walking in on a breakaway chance, lifting a soft wrister past de Melo, giving him his 10th of the season.

Steve Mele, the leading point scorer for the Rail Yard Dawgs, continued his torrid pace, bringing his team back to within one. Working a wrap around chance, Mueller couldn’t beat Patterson who had laid out the glove to make the save, but the rebound came out, giving Mele the chance for the tap-in into the open net.

Showcasing a magnificent individual effort, Mele battled a Marksmen defender behind the net of Patterson while circling to the slot, Mele spotted Armstrong walking in from his blueline position and found him for the one-timer, making it a 2-2 game, midway through the second.

The Marksmen, seemingly unfazed by the comeback, regained the lead late in the middle frame. McNeil chased the puck down to the corner, flipped a backhander to the slot that landed on the tape of Joe Kalisz and his one-timer couldn’t be stopped by de Melo, making it a 3-2 contest.

In the four previous matchups featuring these two teams, the Rail Yard Dawgs had failed to register a power play goal, despite owning one of the league’s most potent man-advantages. In their fifth power play chance of the night, they finally snuck one past the Marksmen. Mele ripped a shot from the left circle that squeaked through the pads of Patterson. Colin Murray, battling around the net, reached past Patterson and poked the puck across the goal line.

Jake Hauswirth, who was sent to the box when the Rail Yard Dawgs scored the previous goal, channeled his frustrations to turn in a power play tally of his own. Schiavo, working through defenders in the zone, pushed a contested shot on net, with the rebound falling to the wheelhouse of Hauswirth to give his team the 4-3 lead.

The Rail Yard Dawgs delivered a barrage of shots to Patterson, but couldn’t solve the Marksmen netminder, giving Fayetteville the 4-3 victory.

Game Notes: The victory snapped a five-game winless streak for the Marksmen and was their first regulation victory since November 23 at Roanoke. The Marksmen were 1/4 on the power play while the Rail Yard Dawgs were 1/5. The Roanoke power play tally was the first surrendered by the Marksmen against the Dawgs.