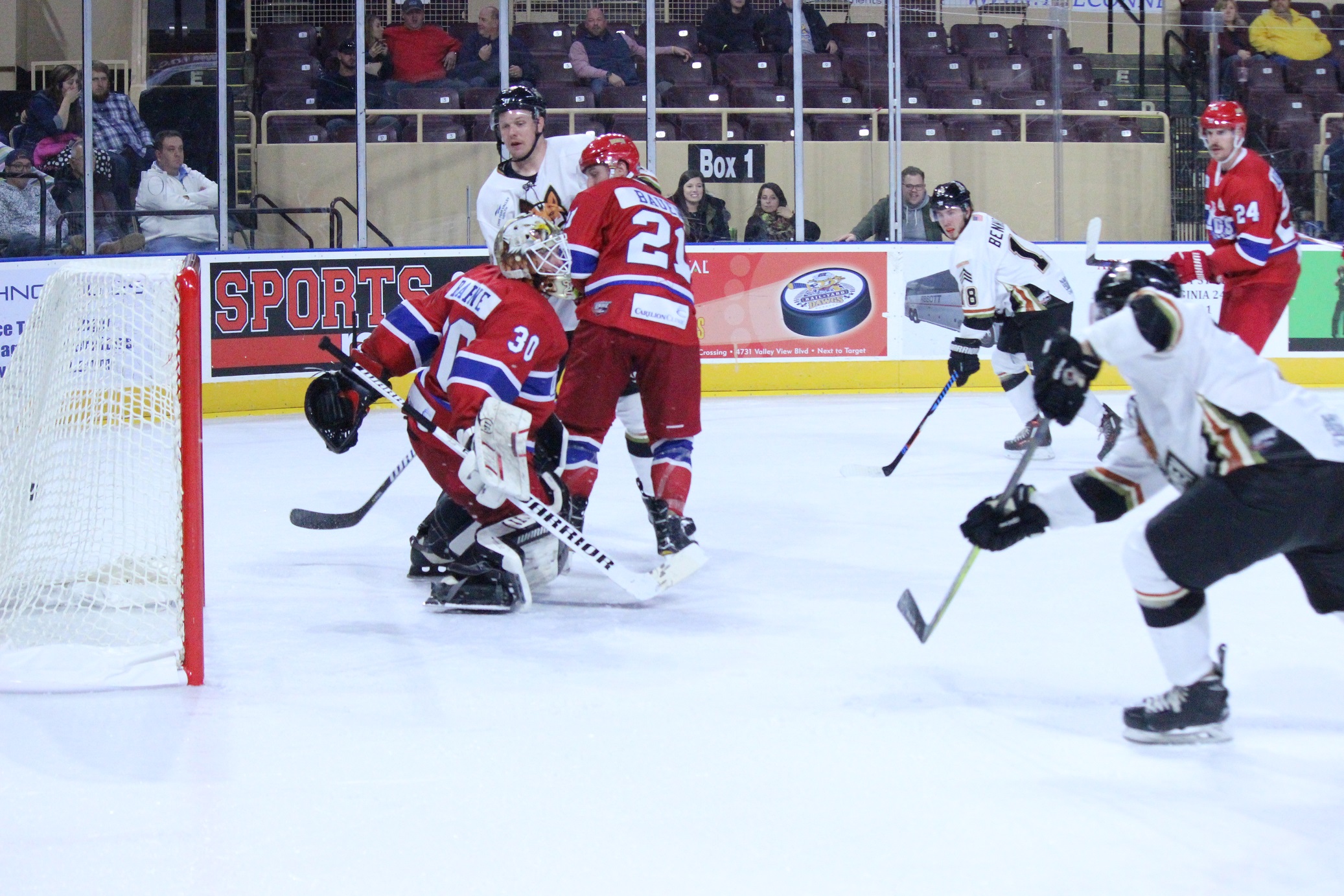 Fayetteville, N.C– The Fayetteville Marksmen peppered 51 shots on net and Kent Patterson stopped 33 of 34 shots, but it wasn’t enough as the Roanoke Rail Yard Dawgs took a 2-1 victory in the shootout, Friday night at the Crown Coliseum.

The first 20 minutes of play showcased each team’s netminders, with Patterson turning aside each of the 10 shots he faced, and Brad Barone shutting out 15 Marksmen shots.

The second period began with carryover penalty time for the Marksmen, and despite numerous quality attempts, were unable to capitalize on the man-advantage. The Rail Yard Dawgs seized the momentum from the successful kill to strike first. Winding into the zone, Mathias Tellstrom skated to the slot, rifling a shot in on Patterson, which caromed back to Tellstrom, who pushed home a spinning wrist shot.

The power play eventually came through for the Marksmen at the 9:22 mark of the second frame. Bryan Dallaire pushed a shot through traffic, into the crest of Barone’s jersey, with the rebound landing in the wheelhouse of John Schiavo, who attempted to lift the puck into the net but couldn’t get enough on it. The puck landed in the slot where Kyle McNeil was able to deposit the rebound for his eighth of the season.

The third period saw the ice tilt towards the net of Barone, who put in yeoman’s work to keep the Rail Yard Dawgs in the contest. The Marksmen finished regulation time with 48 shots on net.

In the three-on-three, overtime frame, neither team could find much rhythm, giving way to the first shootout of the season for the Marksmen.

Newly acquired Jamie Hill roofed a backhander to open the skills competition, but that was all the Marksmen would get, as Colin Murray and Zach Tatrn both scored to give the Rail Yard Dawgs the 2-1 victory.

Game Notes:  This is the second straight contest in which the Marksmen went to overtime, dropping both contests. The Marksmen penalty kill is a perfect 23/23 against the Rail Yard Dawgs. Of McNeil’s eight goals, four have come via special teams (three power play, one shorthanded).