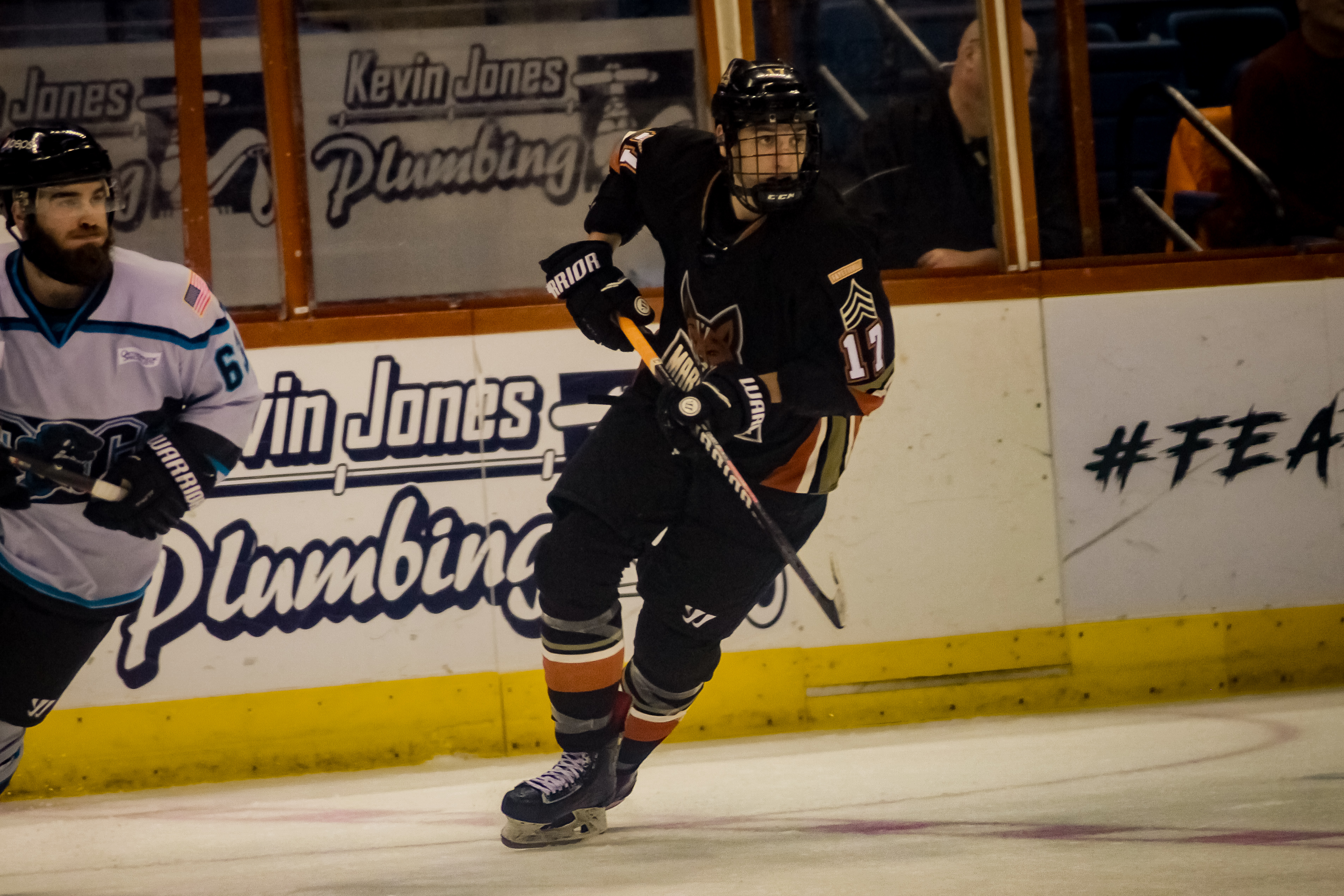 FAYETTEVILLE, N.C. – Opening up their final home series of the season, the Marksmen looked to continue their winning ways. The Quad City Storm invaded Fayetteville for the first-time ever Friday night. The Marksmen knew this was an important game, as a win here guaranteed their spot in the hunt for the President’s Cup.

The game started off with a familiar face being sent to the penalty box for the Storm. Former Marksmen forward Mike Casale got sent to the box for a violation of Rule 75.2 (ii), resulting in an Unsportsmanlike Conduct call. Fayetteville would continue to benefit from their trade made just weeks ago as they converted on the power play from Brandon McMartin’s second goal in his second weekend with the team. Fayetteville was on the board just a few minutes in.

The Marksmen didn’t let that score stand for long – after killing off a penalty, they found the net again. Travis Jeke sent one from the top of the right circle past Storm goaltender Peter Di Salvo, giving the Marksmen a 2-0 lead. Fayetteville knew that no lead was safe, and they wanted to make sure they had even more protection on this lead.

Following another penalty on the Storm, the league leading power play team got to work. Only 18 seconds came off of the penalty before the Marksmen sent the puck through the net for the third time. Darren McCormick scored, giving Fayetteville more cushion with a 3-0 lead. This would do it for the night for former Marksmen goaltender Di Salvo, allowing three goals on just eight shots. Ryan Mulder would come in for clean-up duty.

The scoreboard couldn’t stay still on the Marksmen side, only 47 seconds later Fayetteville found the net for the fourth time in the opening frame. Tim Kelich found the net, the fourth different Marksmen to score in the contest. His goal extended the lead even farther, all the way to 4-0. Three goals in not even a minute and a half.

Even after the myriad of goals, the clock above the ice still read 9:21. That gave Quad City ample time to try and shorten the deficit, but first they had to stop the bleeding. The offense picked up for the Storm in a way, as they outshot the Marksmen 8-6 in the final 10 minutes of the first. Even with the high output of shots, none of them could get past Nathan Perry. The horn sounded, sending Fayetteville into the tunnel with a four goal lead.

The second period of the game started off with little offense but lots of whistle blowing. More penalties were handed out in the opening five minutes of the second period than there were in the entire first period. Unfortunately, Fayetteville didn’t benefit from these penalties, as Quad City’s Brian Rowland – a familiar foe for the Marksmen – scored their first goal of the game, shorthanded.

The Storm were blown for yet another penalty, again leading to nothing for the Marksmen. Fayetteville suffered an easily-preventable penalty. They got a minor penalty for having too-many-men on the ice. The power play deemed to be a blessing for the Storm as they got their second goal of the game, this time from former Marksmen Sean Kacerosky. The score shortened their deficit to only two goals, and stayed the same going into the dressing rooms for the final time. 4-2 Marksmen.

The final period of play started of with, surprise, more penalties. Both teams got a minor-penalty at the same time, 70 seconds into the period. A series of more penalties ensued, the Storm with a single minor and the Marksmen with two. Fayetteville yet again couldn’t count, and got a penalty for having too many men on the ice. The pair of penalties gave the Storm a minute and a half to work with a five on three chance, and they didn’t mess up.

With only a single second left on the two man advantage, Quad City apparently found the net. Let’s break it down, exactly as it developed.

The Storm rushed to the net from the right side. Dean Yakura fired off a shot that appeared to remain entirely in the crease, and never cross or appear to touch the goal line. The linesman skating directly above the net in the right wing side immediately waved his arms to the side to signal no-goal, however the goal judge had turned on the red-light. Regardless, play-persisted for over two minutes, and a stoppage finally came with 4:42 left in the third. This allowed the on-ice officials to talk with the goal judge on what he’d seen. Apparently from his angle, the puck fully crossed the line and bounced back out before being sent to the corner. The argument must have been compelling enough to not only award the goal, but to also put the allotted time back up on the board, and return Osaka to the box to serve – again – the remainder of the too-many-men that was previously killed off. The alleged-goal shortened their deficit to a single goal at 4-3.

Even with the Fayetteville defense needing to step up, Quad City kept controlling the puck in their offensive-end. The Storm outshot the Marksmen by three in the final six and a half minutes of the game. Even with the Storm peppering the net with shots, Nathan Perry held strong. Quad City yanked the Mulder and tried with an extra skater, but it would be for naught.

Taylor McCloy sent the puck into the empty Quad City net, securing the victory for Fayetteville. McCloy was the fifth skater to score for the Marksmen, as every goal was scored by someone different. The clock hit zero and Fayetteville won the game 5-3.

The win secured their spot in the playoffs next month. This is the first time that the Marksmen have ever made the playoffs, first for the franchise since the 2016-17 Fireantz. The win also gave the Marksmen sole possession of fifth place, as the Mayhem lost to Huntsville last night. Also favorable for the Marksmen, Knoxville and Roanoke both fell in their games, giving the Marksmen space from teams below them, and an inch closer to the fourth place Ice Bears.

Fayetteville looks to take the momentum from Friday and use it throughout the weekend, playing two more against this same Storm team. Puck drops tonight at 6 P.M. for game two of the gritty weekend series – and if it’s anything like last night, we should be in for a treat.

Tonight is our Princess Party/Superhero/Military Appreciation Night! We’ll have out Disney Princesses Anna & Elsa (Frozen), Ariel (The Little Mermaid), and Snow White (Snow White & The Seven Dwarves) alongside everyone’s favorite web-slinger Spider-Man! Tickets for the Princess Party meet-and-greet are $25, or $10 if you already have tickets. Don’t forget, ALL active-duty and retired Military pay just $10 tonight as our way of saying thank you.

Tomorrow afternoon is Sunday Funday (St. Patrick’s Day Edition) – alongside our usual Kids Get in Free promotion and our always-fun Post-Game Skate with the Marksmen, we’ll also be offering $1 Hot Dogs and GREEN Popcorn!

You won’t want to miss it – get your tickets HERE.

As Storm Roll in to Town, Marksmen Look to Clinch Playoff Spot

Post-Season Players: How Fayetteville Found Their Way Scroll to top