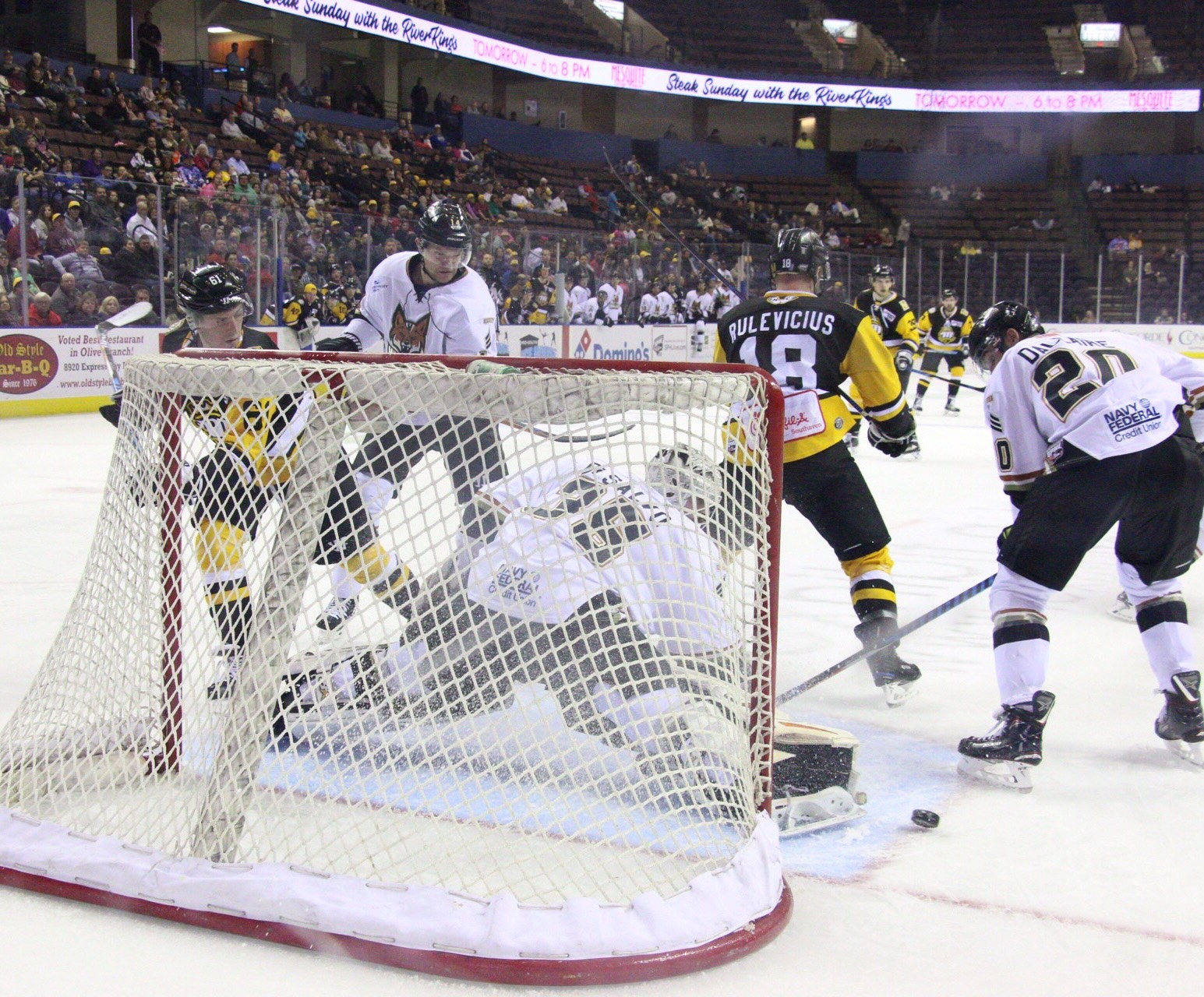 Southaven, MS– Peter Di Salvo put forth an inspired performance against his former team, stopping 26 of 27 shots, and the offensive leaders found the back of the net to give the Fayetteville Marksmen a 3-1 victory over the Mississippi RiverKings on Saturday Night at Landers Center.

The league’s number one penalty kill unit went to work for the RiverKings midway through the first frame, and flexed their offensive muscle, giving them the 1-0 lead. Clearing the puck past the right point, Devin Mantha raced down the right-wing boards into the Marksmen zone and rifled a wrister past Di Salvo, who came out to play the puck but lost the foot race to Mantha.

The choppy flow of the first period continued as each team circled players in and out of the penalty boxes, but it ended with Mantha’s goal as the lone tally of the frame.

The penalties didn’t slow after the intermission, with each team trading power play chances. The Marksmen took advantage of their first opportunity of the period and struck for the equalizer. Jake Hauswirth circled in from the left boards, just below the circle, toe-dragged around a defender and marked the far post, just past the glove of Tyler Green, to make it 1-1.

Special teams continued to be the offensive driver, as the Marksmen earned their first lead of the night with their second straight power play tally. Hauswirth, skating in from behind the net, let off a pass to Kyle McNeil in the slot. McNeil deflected the puck on Green, who made the initial stop, but couldn’t corral the rebound, allowing McNeil to push the loose puck through the pads of Green.

Extending their lead to 3-1, the Marksmen rallied for the first even-strength tally of the evening. John Schiavo skated up the boards in the zone, cut to the slot, splitting two RiverKing defenders in the process, and muscled a contested backhander over the glove of Green.

The pace of the game picked up in the final frame, with limited penalties for either team. The Marksmen employed a prevent defense halfway through the frame, a tactic that proved beneficial for them, as they withstood a barrage of shots and held on to earn the 3-1 victory.

Game Notes: Schiavo extended his point-streak to seven games, matching his season-high. Hauswirth extended his point streak to four-games. The Marksmen went 2-7 on the power play against the league’s number one penalty killing unit, while the RiverKings went 0-6. With the victory, the Marksmen snapped a five-game losing streak.