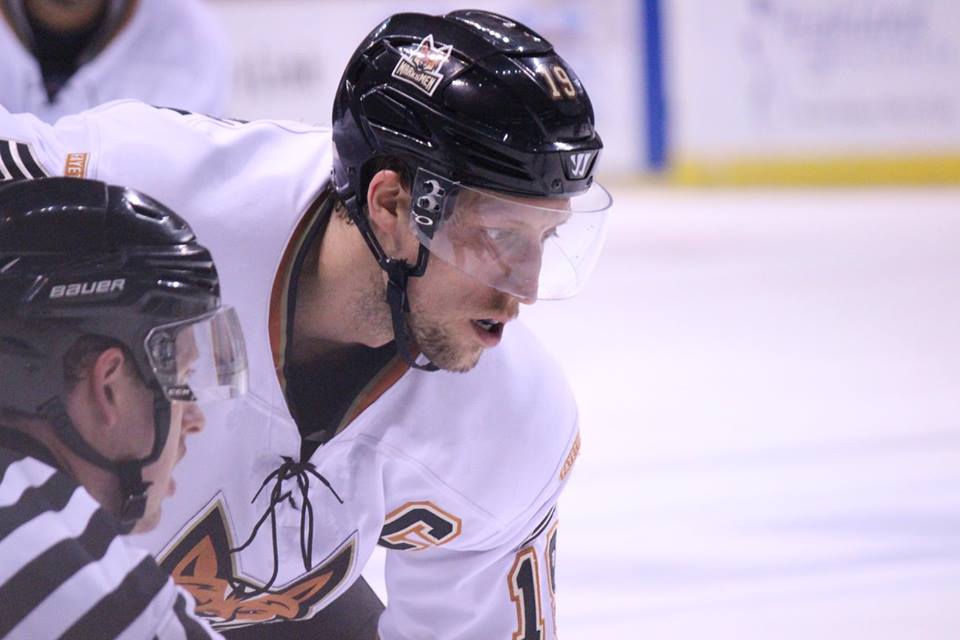 Roanoke, VA– The Fayetteville Marksmen controlled much of the game, outshooting the Roanoke Rail Yard Dawgs, 46-24, and Jake Hauswirth earned his 300th professional career point, but it wasn’t enough as the Marksmen fell, 4-2, Saturday night at the Berglund Center.

For the second straight night, the Marksmen jumped out to the 1-0 lead. While on the power play, John Schiavo walked in from the left corner, attempting to challenge Brad Barone in tight, but instead fed a backdoor feed to Hauswirth. Hauswirth let loose a howitzer from the left circle that deflected off a Rail Yard Dawg defender and past Barone.

The second period began with the ice tilted in favor of the Marksmen, but the Rail Yard Dawgs hit the twine to even the game up at 1-1. Earning a breakaway from the neutral zone, Mathias Tellstrom ripped a slapshot from the top of the right circle, beating Peter Di Salvo on the glove side.

At the 15:57 mark of the second stanza, the Marksmen regained the lead, courtesy of Jamie Hill’s third in two nights. Brad Campagna lifted a wrister from the right point on Barone, who made the initial stop, but the rebound landed on the tape of Hill, who popped home the rebound chance. With the secondary helper on the tally, Hauswrith earned his 300th professional career point.

Opening the final frame, the Rail Yard Dawgs utilized carryover power play time to take momentum and find the equalizer. John Gustafsson pushed a shot towards Di Salvo that caromed off the pads of the Marksmen netminder, but Matt Beer was on the doorstep to pick up the rebound and lift it to the top corner.

Just over halfway through the final frame, the Rail Yard Dawgs took their first lead of the night. Using creative stick work, Steve Mele stole the puck just inside the blueline, used a Marksmen defender as a screen and ripped one through the pads of Di Salvo.

With one-minute left to play, the Marksmen pulled Di Salvo in favor of the extra attacker. Generating quality scoring chances, the Marksmen peppered Barone, but couldn’t solve the netminder. The puck eventually trickled to the far corner for David Gandara, who lifted a rink-length empty netter to ice the game, 4-2.

Game Notes: Schiavo is on a four-game point streak. The Marksmen went 1/4 on the man advantage, while the Rail Yard Dawgs went 0/2. This is the first of four straight on the road for the Marksmen.