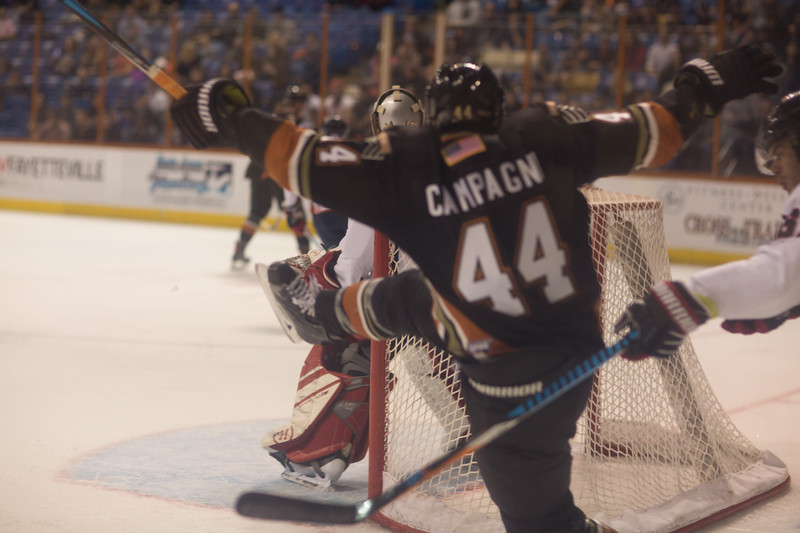 FAYETTEVILLE, N.C. – Every other position has been announced this off-season for the Marksmen organization heading into training camp, except for that of the Defense.

At 6’2 and 205 pounds, the right-hander from Monroe, New York provides a bull on the blue line, keeping pucks in without letting opposing forwards out.

Campagna, 26, has played in Fayetteville since the 2016 Southern Professional Hockey League season. He started his professional hockey career out west with the Knoxville Ice Bears, before finding his way to the then-Fireantz for the rest of the season, and has called the All-American City home since, with one stint last season up in the ECHL with the Reading Royals.

Campagna is a true-blue-collar stay-at-home defensemen, and prefers to serve the blue line over the ever-growing hybrid forward-based-defensemen. As a testament to his defense-first focus and attitude, last season was his highest scoring of professional and collegiate career, amassing six points (3G+3A).

A true display of the defenseman’s creed; hardest efforts are not always the one on the score sheet.

For the player that has been affectionately-coined “Camper” by Marksmen fans, his hunger to right the ship in Fayetteville grows everyday closer to Opening Night.

“I am very excited to be back in Fayetteville for a third season. We have a great deal of unfinished business this year, so I’m extremely determined and confident in our new personnel to get the job done and bring a winning culture back to Fayetteville,” said Campagna “I cannot wait to be back at my second home with the best fans in the league.”

Campagna is the veteran leadership that a youth-based team like the one Coach Kallechy is crafting will require. With a bevy of young guns who have some higher-level call ups immediately following the end of their collegiate careers, it is important that they are groomed and prepared for what an entire professional hockey season can be like, physically and mentally.

With ‘Camper’ back, the Marksmen have reassembled much of their captaincy-core from last season, and look to be able to have the locker room presences to properly and effectively mold a team under the same mission.

The Fayetteville Marksmen are excited to welcome Brad Campagna home for the 2018-19 season, and look forward to him being the bedrock of what promises to be an exciting season of hockey in Cape Fear. The 2018-19 Marksmen Home Opener is October 19th against the Roanoke Rail Yard Dawgs, and Season Tickets are on sale NOW!

Sheeran – Street Hockey to the South Scroll to top