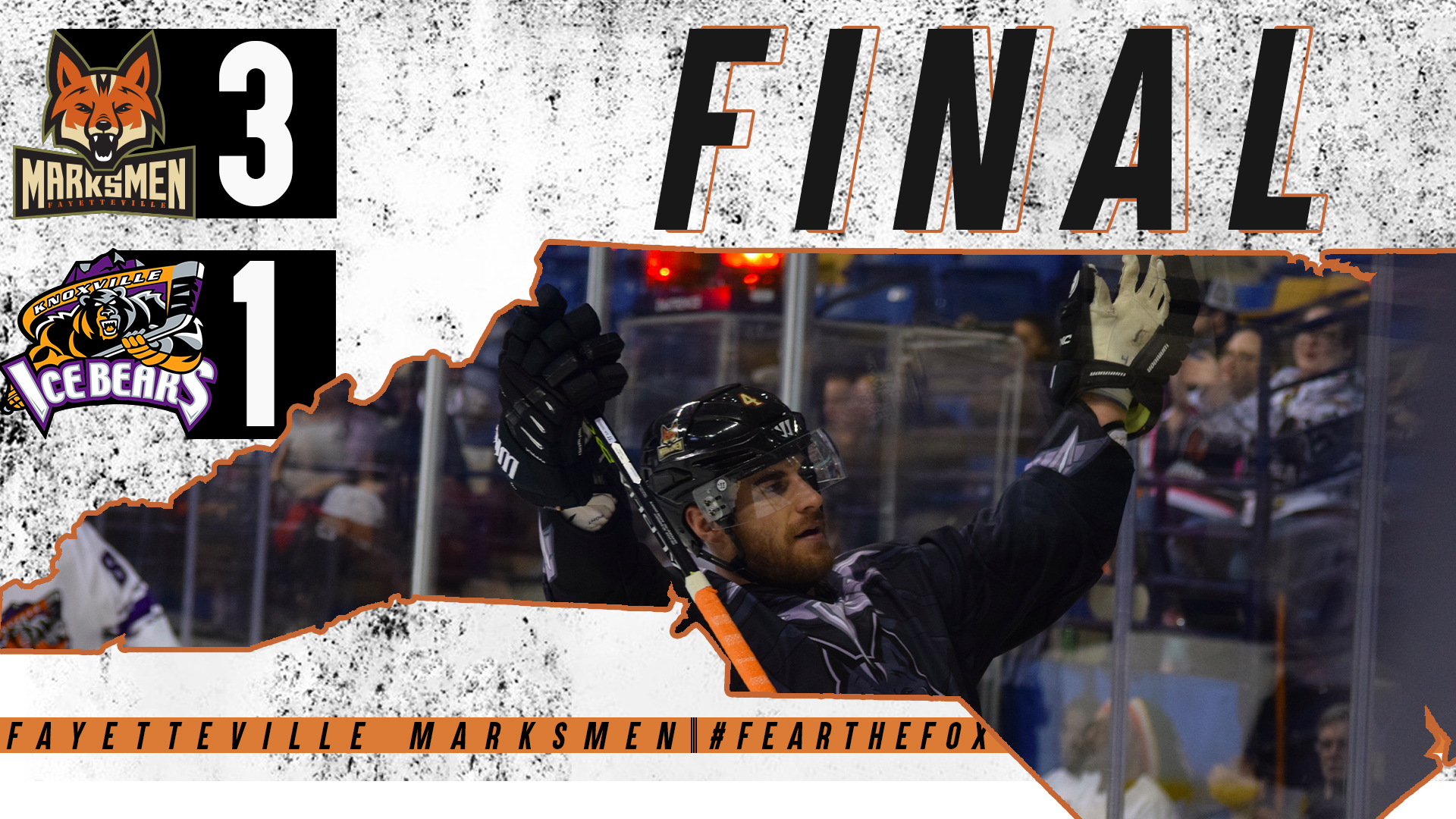 FAYETTEVILLE, N.C. – The Crown Coliseum would play host to many acts of heroism on Saturday Night, as over 3000 fans packed the arena for a night of Super Heroes and celebrating the real life heroes of the Cape Fear Valley NICU. With a crowded Crown, the Marksmen would put on an entertaining effort enroute to their fourth-straight victory.
A tightly contested first half between the Marksmen and their visiting foes in the Knoxville Ice Bears would see a game of back and forth with no real momentum being seized. Onward past the halfway mark of the first frame, Alternate Captain Taylor McCloy would score his first of a two goal night, 10:01 in the period thanks to a timely redirect off a Travis Jeke shot. Fayetteville would continue their early-scoring march from the previous night with an unassisted goal from Donald Olivieri to give Fayetteville an early 2-0 lead – enough to give the Marksmen the win. A late goal in the first period would be all the Ice Bears would scavenge on the night, as Stefan Brucato would put the road team on the road. Period one would end 2-1 Marksmen.
For the remaining two periods, the contest would be ultimately quick-moving but outside of a consistent mark of penalties in period two, overall a race to the finish for Fayetteville. The second period would come and go with power play opportunities unanswered for, and no goals pass the respective netminders. In the third period, even less would occur with a clean sheet for penalties on the night, and again the Marksmen doing enough to maintain their goal lead, secured over a period prior.
With an empty net, an amped up crowd, and an opportunity, Taylor McCloy would secure his second goal of the night, and lead the way statistically for a Marksmen win – their fourth-straight and second-straight weekend sweep. Blake Wojtala would be masterful in front of the twine for the Marksmen, accumulating 34 saves on 35 shots faced, and shutting out the Ice Bears for two full periods.
With the win, the Marksmen continue their streak of points in games, and head into a three-game home weekend against a surging Evansville Thunderbolts squad with plenty of momentum of their own to account for.
Fayetteville returns to action on Friday night for College / Ladies Night at 7 PM on home ice.
January 18, 2020/by Fayetteville Marksmen
https://marksmenhockey.com/wp-content/uploads/2020/01/FINAL.jpg 1080 1920 Fayetteville Marksmen https://marksmenhockey.com/wp-content/uploads/2022/05/Marksmen-286x300.png Fayetteville Marksmen2020-01-18 21:43:242020-01-24 22:48:38Wojtala’s Heroic Effort Secures Marksmen Weekend Sweep

Marksmen Throw a Touchdown on the Mayhem