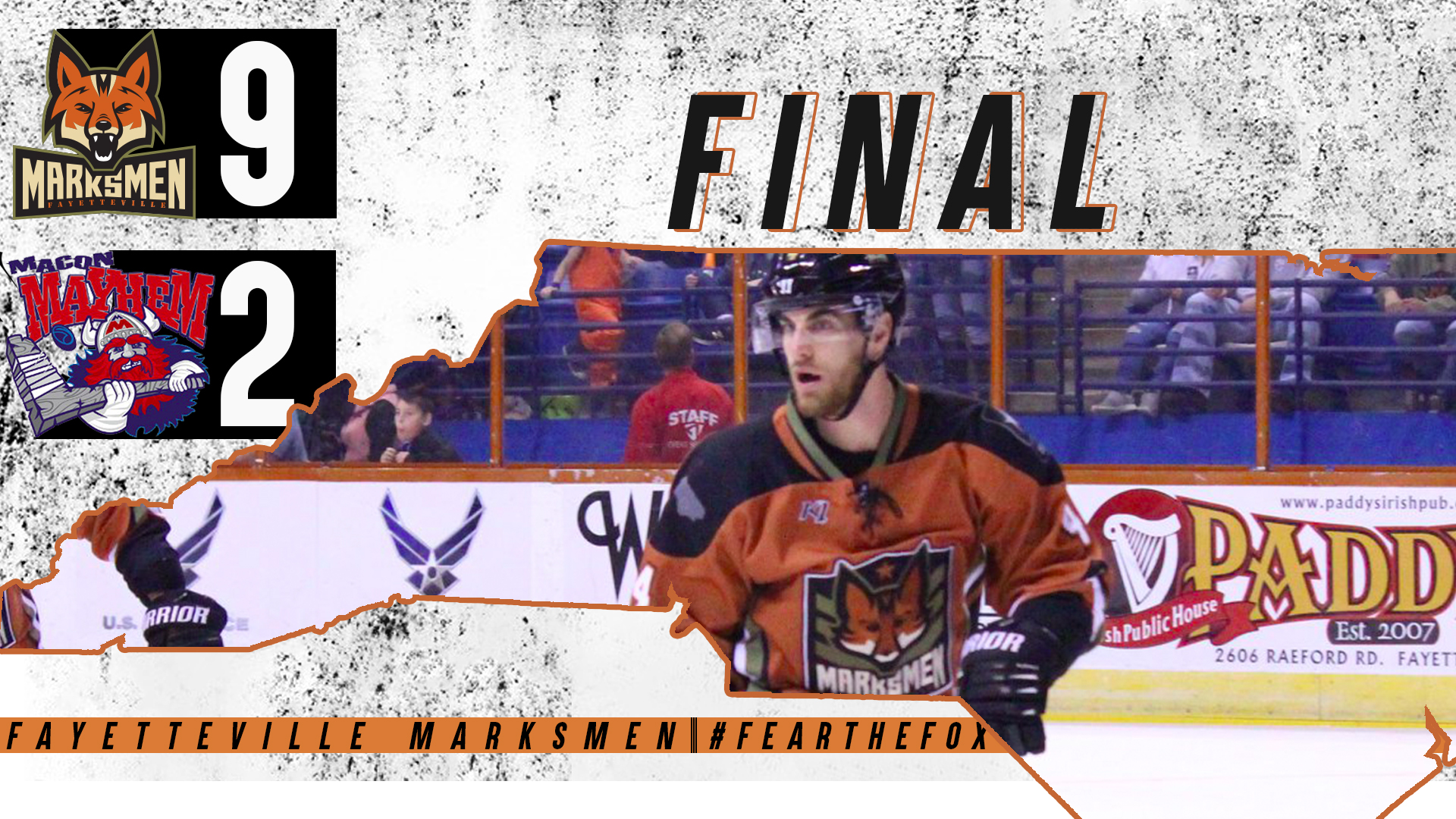 FAYETTEVILLE, N.C. – World Record Night for the Fayetteville Marksmen would see a record-number of goals on home ice in the last two seasons, as the team would embarrass their road-foes in the Macon Mayhem.
Fayetteville would strike consistently through the first period, scoring the game-winning goal before the period would come to an end. Things would be start early on for the captain, who would earn the first star of the game, as Max Cook would score 6:02 into the first period. The scoring would continue for the Marksmen with Alec Marsh – who would finish the night with a two point performance – eight minutes later. Before the period ended, the newest of the Marksmen Forwards, John Gustafsson, would put another on the board against his former team. 20 minutes in the books, Fayetteville would hold a 3-0 lead.
In the second period, Fayetteville would continue to pour it on heavy against the Mayhem with a four goal outburst. Captain Cook would start the scoring once again, as he’d strike just 3:31 into the new frame. The score would stand at 4-0 before the Marksmen would finally allow a goal from Macon, as Dylan Denomme would put one past Wojtala. Not even 90 seconds later, Brian Bowen would get his first goal of the night to re-take a four goal lead for Fayetteville, as previous scorers Cook and Marsh would assist. On the powerplay, the Marksmen would score on a man-advantage off the stick of Matt Robertson just past the halfway mark of the game for a 6-1 lead. Barely any time later, the Mayhem would return on the scoreboard with a goal from Stepan Timofeyev. With just seven seconds remaining in period two, Bowen would put an exclamation mark on the board to make it a 7-2 game.
With the game already with a fork in it, the Marksmen would sink a final pair of goals in the waning 20 as Brett Johnson and Matt Robertson would score in a five minute span to put the game away with a 9-2 victory; the highest scoring game in Marksmen team history, and giving them their third straight victory, and a full sweep over Macon in the last two weeks.
The Marksmen return to action on Saturday night for Marvel Super Heroes Join Forces with Cape Fear Valley NICU night at 6:00 P.M. at the Crown Coliseum, as they take on the Knoxville Ice Bears for a weekend finale at home.
bit.ly/FMMarvel
January 17, 2020/by Fayetteville Marksmen
https://marksmenhockey.com/wp-content/uploads/2020/01/endof3.jpg 1080 1920 Fayetteville Marksmen https://marksmenhockey.com/wp-content/uploads/2022/05/Marksmen-286x300.png Fayetteville Marksmen2020-01-17 22:30:482020-01-17 22:30:48Marksmen Throw a Touchdown on the Mayhem