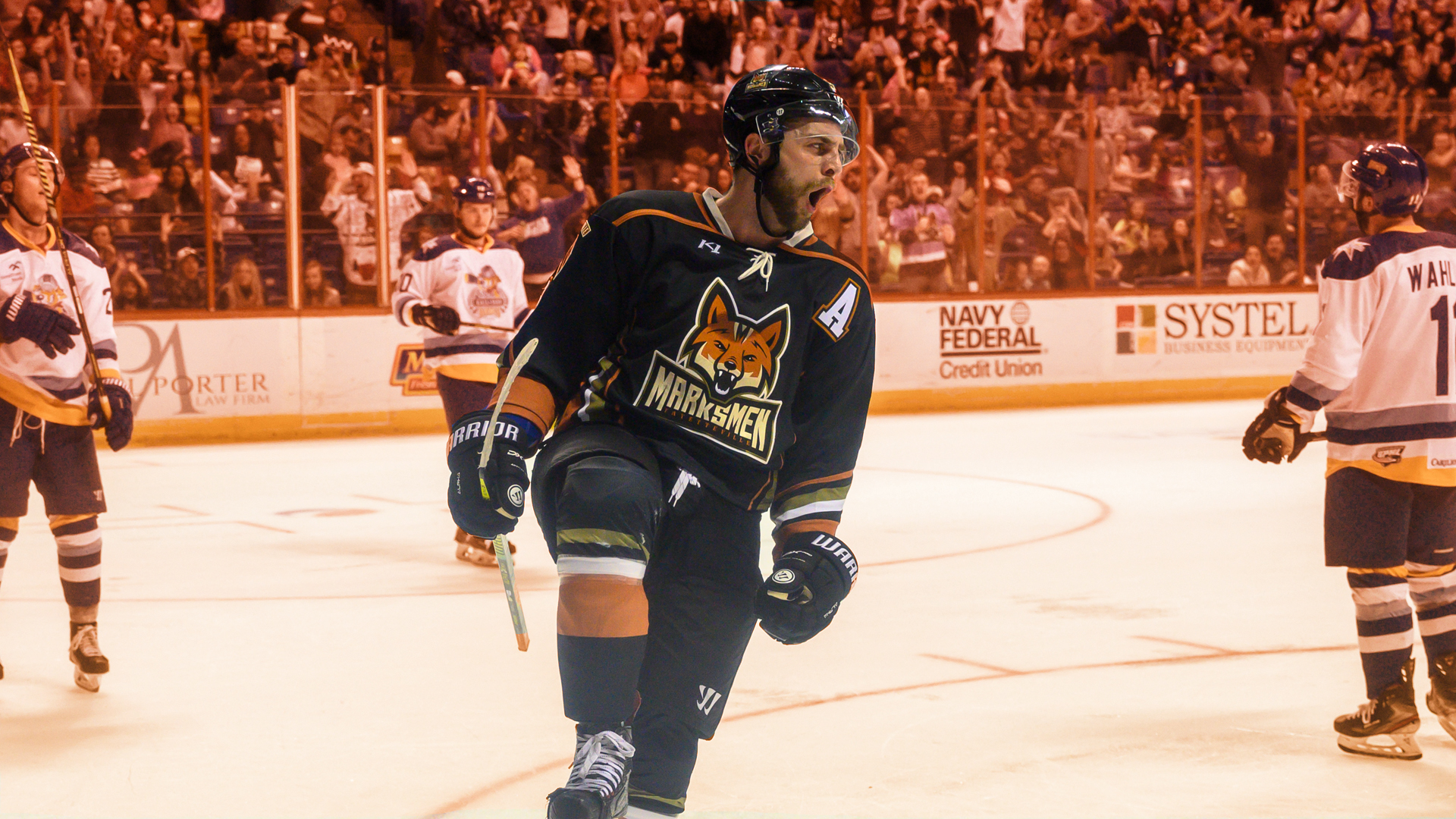 FAYETTEVILLE, N.C. – Anything worth doing, is worth doing right. A commonly-expressed mantra that, until actually shown in action, falls upon deaf ears. For the Fayetteville Marksmen, a three-year journey of this maxim was expressed in a truly tumultuous – and literal – uphill climb; starting year one as a near-historically bad team, to a seemingly meteoric rise to the peak of the Southern Professional Hockey League not even two full seasons later.

When one looks back on what the 2019-2020 season was – and unfortunately could’ve been – for the Marksmen, it is no longer observed in just the scope of the Marksmen, but as a demarcation of what was before and what is to come for hockey in Fayetteville. From the most successful start to a season in the history of hockey in the All-American City, leading up to an expectantly preeminent culmination in the post-season, and finishing with more questions than answers due to circumstance, the time has come to reflect upon a truly unforgettable – and historic – season of hockey, and what lead us here.

With the eventual final season of the Fayetteville FireAntz winding down, Union Pro Hockey Group, LLC., fronted by Owner Chuck Norris, would agree to terms to purchase the franchise, with plans for a full rebrand due heading to the new team’s first season. The decision was made to rebrand as the Marksmen, as an all-encompassing term to relate to Fayetteville’s tradition of Military excellence. The choice of the logo/mascot being a Red Fox was a nod to the State’s Mammal, as well as to the mentality and hunting nature of the animal to reflect the style of play of the team.

Norris, an Army Veteran and former Fayetteville Businessman, was a born-and-bred hockey fan from his childhood in Detroit, Michigan. Deeper into his Fayetteville hockey connection, Norris had worked as a Game Day Staff member of the Central Hockey League’s Fayetteville Force, including a stint driving the Zamboni.

With the season ending, preparations to start the Marksmen chapter of Fayetteville Hockey would begin.

The debut season of the Fayetteville Marksmen would be remembered for more lows than highs on the ice, as the team would muster together just 12 wins through four different coaches, and finish in the basement of the SPHL. The season would end on a nominal high note, as the team would avoid tying a historically poor record thanks to a road shootout win against the Evansville Thunderbolts in game 56.

Captain Jake Hauswirth would finish with 65 points (26G+39A) playing in every game; good for first among the team, and third in the entire league. He’d also be named All-SPHL Second Team. Two future staples and captains of the Marksmen, Max Cook and Travis Jeke, would spend portions of this season with the team.

Off the ice, the Marksmen would start the slow grind of attendance improvement in the Crown Coliseum, with a bigger focus on group outings and promotional nights. Norris would take over as the sole owner of the Marksmen heading into the offseason, making his first move to hire a true Director of Hockey Operations, in Head Coach Jesse Kallechy.

With Kallechy – a former SPHL goaltender, and multi-year assistant coach with the Huntsville Havoc – at the helm of the Hockey Operations Department, the Marksmen had found their leader for the hockey side to juxtapose Norris’ work as CEO of the Front Office.

Under first year Head Coach Kallechy, the Marksmen would be competitive in every game as they’d more than double their win total from the previous season, leading to their clinching of a playoff spot for the first time in team history. The 2018-2019 Marksmen also set the record for longest road-winning streak in franchise history in December-February. The Marksmen would win in their first-ever playoff game, and set the foundation for the next season. Kallechy would also mastermind a number high impact trades for the Marksmen early on, including the acquisitions of two staples – team scoring-leader Brian Bowen and Taylor McCloy. Defenseman Travis Jeke – named a captain later in the season – would earn the Marksmen’s first all-league award as Defenseman of the Year.

The season would start early for the Fayetteville Marksmen in 2019-2020, as former Marksmen defenseman Cory Melkert would retire from playing to join Coach Kallechy as his assistant. With a two-headed SPHL alumni coaching tandem, the Marksmen would make quick work of their recruiting in the Summer, finding a number of under-the-radar, high-caliber players to shine alongside staples like newly-named Captain Max Cook, Alternate Captains Travis Jeke and Taylor McCloy, scoring-leader Brian Bowen, and a number of familiar faces.

For the Marksmen Front Office, the Summer was spent in high quantities out in the community making connections and supporting local organizations. Connections made from such events would result in nights such as the Carolina Hurricanes-inspired Bunch of Jerks Night, Fayetteville Woodpeckers Night, and successful Veterans Appreciation and Military Appreciation Nights.

Hockey history would be made on Saturday, October 12 as the Fayetteville Marksmen would play in the first Professional Hockey Game ever played on a Military Installation, in the inaugural edition of the Fort Bragg Classic at Cleland Ice Center. It would set the tone for what would promise to be a historic season going forward. As the season started, a 8-0-1 record would give the Marksmen the best start in Fayetteville hockey history. They wouldn’t stop there, matching their 2017-2018 win total (12) in just 19 games played (12-3-4), and 2018-2019 win total (25) in only 36 games (25-4-7). Though the season would be shortened by 10 games due to the Coronavirus, the Marksmen would surpass 30 wins (31 total) – the ninth occurrence in franchise history. The team would finish tied for first place with the Peoria Rivermen, who the Marksmen were to face in a three-game weekend series the day before the season was cancelled.

In individual achievements, Brian Bowen would lead the league in goals (30), second in total points (58), second in plus/minus (+27), be named January Player of the Month (first PotM in Marksmen History), and surpass the 100 point plateau in the team’s final weekend, in only his second season of pro hockey. Max Cook would finish third in total points (53), and second in assists (38) in his first season as Captain. A number of other Marksmen would stake their claim in different categories, as rookie goaltender Blake Wojtala would finish in the top five in wins (18), saves (801), and save percentage (.920), rookie defenseman Nick Le Sage being third in league plus/minus (+26), and rookie forward Shane Bednard finishing second in total points among rookies (37). Further achievements remain to be announced, such as the First and Second Team All-SPHL, Rookie Teams, and more; certainly assuring additional accolades for the Marksmen. The Marksmen would also have their first alumni in the AHL, as former goaltender Trevor Gorsuch would be called up to the Chicago Wolves.

Attendance would take its biggest single-season jump for the Marksmen, averaging an additional 500 fans per game over the previous season, welcoming in over 6000 fans for the second-annual Operation: Sellout, over 5600 tickets sold for the Education Day Game in collaboration with Cumberland County Schools, and an average attendance of 2,693 fans.

Despite the unforeseen cancellation of the season, Marksmen Season Ticket Holders showered their team in support through the “Angel Donation” option, with over 80 Season Ticket Holders foregoing their refund in hopes of financially-aiding the team through the lost profits and revenues of losing six home games. In combination with their overwhelmingly generous support, alongside the pride of the Marksmen Organization, the team will return stronger than ever next season. Even during the tumultuous time effecting businesses around the world, Norris has kept his full staff employed and on payroll, believing their work to help lead the organization toward furthered success into the 2020-2021 season.

Nothing has come easy for the Fayetteville Marksmen, but through the sheer belief in attitude, effort, and work ethic, the organization has made phenomenal leaps and bounds in just three seasons. Though what could have truly been will never be known due to the cancellation of the 2019-2020 season, the same foundation that allowed for such growth continues to be built upon heading into 2020-2021.

With history constantly being rewritten, the story of the Marksmen continues to develop more intensely with every passing game. Despite this chapter’s unexpected end, what remains to be written in the Chapter Four will promise nothing short of excellence and intrigue.